Different Stages’ The Dresser shows where to find the juiciest drama in the theatre: backstage 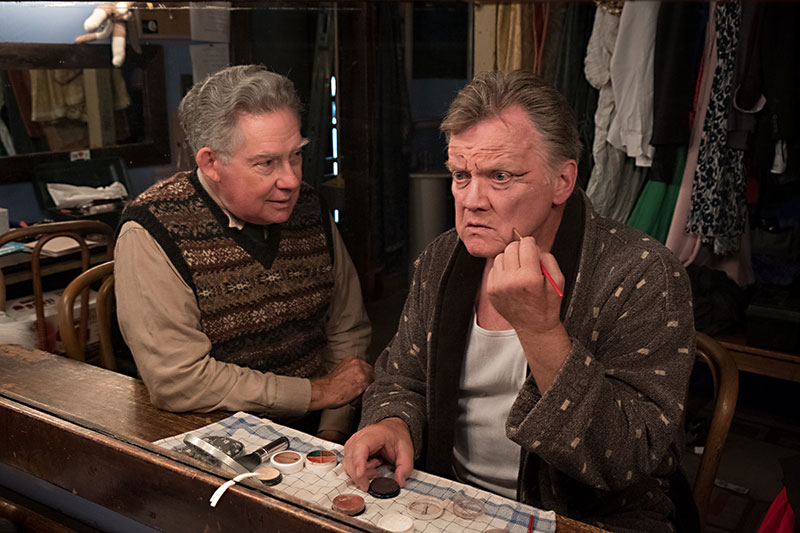 Anyone who has ever worked on a play will tell you that as engaging and spellbinding the story onstage can be, it often pales in comparison to the drama backstage. Rehearsals and performances are all too often underscored with concertos of countless diva meltdowns, steamy showmances, and last-minute hail-Mary-level longshot fixes. Different Stages' production of The Dresser raises the curtain on this unexpected part of the stage – exposing the soft underbelly of an actor, a production, and a country all hanging by a thread but resolved to keep calm and carry on.

Sir, a legendary cornerstone of the English Theatre (played pitch-perfectly by Ev Lunning Jr.), has also become a legendary liability for the touring Shakespeare company he manages. Tonight, with all of Europe held fast in the grip of World War II, Sir is slated to play King Lear, the bard's tragic monarch-turned-madman. However, it becomes clear that Sir is most certainly taking his work home with him, as he has apparently suffered a bit of a psychotic break, leaving him even more difficult to work with than usual. And if that wasn't enough to give even the most stoic of stage managers the flop sweats, to make matters exponentially worse, the Nazis are currently shelling the hell out of England.

With the fate of the show (and possibly the entire company) at a crossroads, the task of holding it all together falls squarely upon the shoulders of Norman, Sir's faithful dresser, who has for years soothed his master's woes, fluffed his ego, and wheedled him out onto the proscenium. It has always been a tough job, but Norman has weathered the storm with gentle words, patience, and the occasional nip from a secret bottle in his apron. But as showtime creeps ever closer, Norman (played by a very committed and dutiful Norman Blumenstadt) is faced with an uphill battle that seems to grow steeper by the minute. The show must go on, but will it?

Ronald Harwood's script is everything one should expect from an Oscar-nominated work. Intelligent, quick-witted and genuinely funny, The Dresser is a somewhat fictionalized account depicting Harwood's time assisting various leading men, including actor-manager Sir Donald Wolfit, who was known in English provinces for his wartime touring productions of Shakespearean drama, in which he often played Lear.

Different Stages' version of The Dresser includes a solid ensemble cast, Ann Ford's well-curated costumes, and a notable set design courtesy of Ann Marie Gordon, but the chemistry between Blumenstadt and Lunning is what takes the show from good to great. Both talented and seasoned performers, these two men dance around each other again and again using Harwood's wonderfully written text – at some times jesting and at others jousting.

All the world may be a stage, but Different Stages' production of The Dresser proves without a shadow of a doubt that the best drama can always be found in the theatre – and not necessarily where one would expect it.

The Vortex, 2307 Manor Rd.
www.main.org/diffstages
Through July 15
Running time: 2 hr., 15 min.
A version of this article appeared in print on July 7, 2017 with the headline: Behind the Curtain