The Secret History of the Off Center 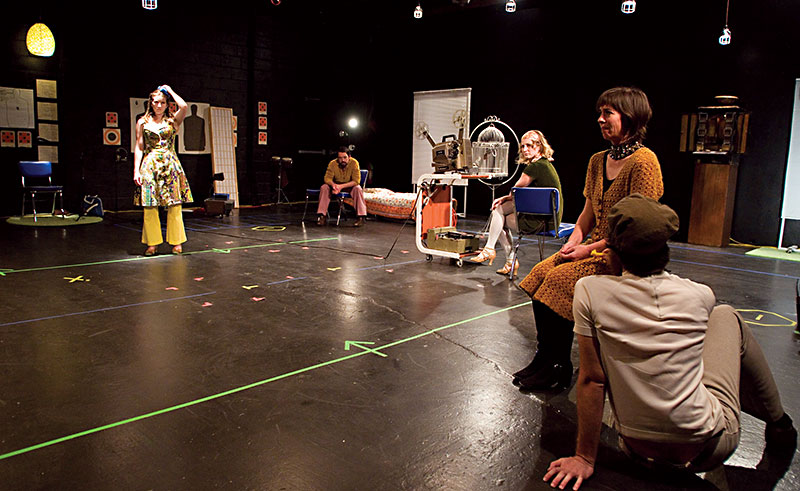 Oh, no mistake, there was plenty about the Off Center not to like. A rumbling old HVAC system that perpetually threatened to drown out actors' voices but that no one dared to leave off lest the audience melt in summer or freeze in winter. That bathroom with the odd step up that felt like being on floor 7½ in Being John Malkovich. The plumbing that wasn't for shit (and that's not being figurative). The vermin skittering over head and under feet, brazenly eyeballing you as if they were the ones paying rent on the building and you were the squatter.

And yet, as Luther Vandross oft reminded us, a house is not a home. It isn't the structure itself that defines a dwelling's worth or meaning or significance; it's the people who inhabit it and what happens while they're there that determines that. Take the measure of the Off Center by the Rude Mechs, the venue's stewards from the fall of 1999 through the spring of 2017, and how they made use of it – what they created there as well as what they encouraged and enabled others to create – and you will find a home, one to love, to prize, to treasure.

Start by seeing the Off Center as a formative site in the Rudes' origin story. You know how we hold on to the William Sydney Porter House on East Fifth? It isn't because the four-room cottage is a striking example of Victorian architecture's Eastlake Style. It's because it was in there that Porter was in the process of becoming O. Henry, where the news hack with a knack for satire began morphing into the master of the short story. The space was part of the artist's evolution. So it is with the Off Center and the Rudes. Even before the old Eastside warehouse was repurposed for performance by Morgan Knicely and Steve Bernard Jones in 1998, the group had made a name for itself (ambitious young theatre collective whose members work hard and play hard), but it was in the Off Center that the Rudes came into their own, where they launched their take on Greil Marcus' Lipstick Traces and it propelled them onto the national scene; where they took on Bush 43's Iraq War policies in Get Your War On and it took them across the nation; where they birthed the legend of acting guru Stella Burden in The Method Gun and introduced American theatre to the wonders of the queso fountain in Stop Hitting Yourself. The Rudes entered the Off Center as a young troupe making bold original work in Austin and left it as a company that theatre makers across the globe looked to for innovation and inspiration.

The space itself contributed to the Rudes becoming the Rudes. Its rawness suited a collective that took its name from the rough laborers of A Midsummer Night's Dream. Oh, sure, the group has at times cultivated a rep for being brash and offensive, leading many to interpret their "rudeness" in that sense, but these Rude Mechanicals also share much with their Shakespearean namesakes: honesty, loyalty, big hearts, an unshakable belief in the power of play, and pride in being craftsmen – Austin's Rudes, like Athens', make things with their hands. For them, the Off Center was a space they could build by hand, tear apart, and rebuild over and over again. Consider the multiplicity of configurations: the Alamo Drafthouse-like tiered seating with tables (for bread and wine!) in Decameron Day 7: Revenge!; the county fair midway accompanying I've Never Been So Happy; the escape room and runway-length table flanked by dioramas in Now Now Oh Now; the intricate cardboard tectonics of Perverse Results: Not Every Mountain, to name but a few from 18 years. Each time the Off Center was remade in a new and totally different way, it seemed to spur the group to be even more inventive in reimagining the space, to push further in making the next iteration more "Rude."

And the more these artists played with this space, the more they seemed to give other artists the opportunity to play with it. It was as though having a home of their own heightened the Rude Mechs' awareness of how many arts groups didn't have one, so they made theirs available to as many as they could. And oh, what a rich assortment of artists got to play in the Rudes' rumpus room: Physical Plant, Deborah Hay, Salvage Vanguard Theater, 33 Fainting Spells, Terry Galloway, Rubber Repertory, dirigo group, Deb Margolin, Andrea Ariel Dance Theatre, Forklift Danceworks, Black Arts Movement Festival, Theatre en Bloc, Capital T Theatre, Teatro Vivo, paper chairs, Bedlam Faction, Breaking String Theatre ... so many more. Sometimes the Rudes cut rates so groups could afford the space or partnered with them in co-productions called Rude Fusion. It was a way of sharing the space that came from a sense of community and generosity, and it was born of running the Off Center.

I can't pretend to be a dispassionate observer here; I and my family were recipients of the Rudes' largesse there and got to work with them on multiple occasions. But my experiences up close only confirmed what I'd already noticed before I ever worked in the Off Center myself: that it was more than just a warehouse being used for plays and more than a venue for one company or one audience; it was a home where all were welcome to take risks and taste adventure.

Rest in peace, Off Center. Austin will miss you, more than it knows.

A version of this article appeared in print on June 30, 2017 with the headline: Lipstick Graces

Rude Mechs, The Off Center, Morgan Knicely, Steve Bernard Jones, Lipstick Traces, Get Your War On, The Method Gun