The exhibit by Michael Krueger, Kathleen McShane, and Barbara Weissberger seems a planned mess, but one that echoes a greater scheme 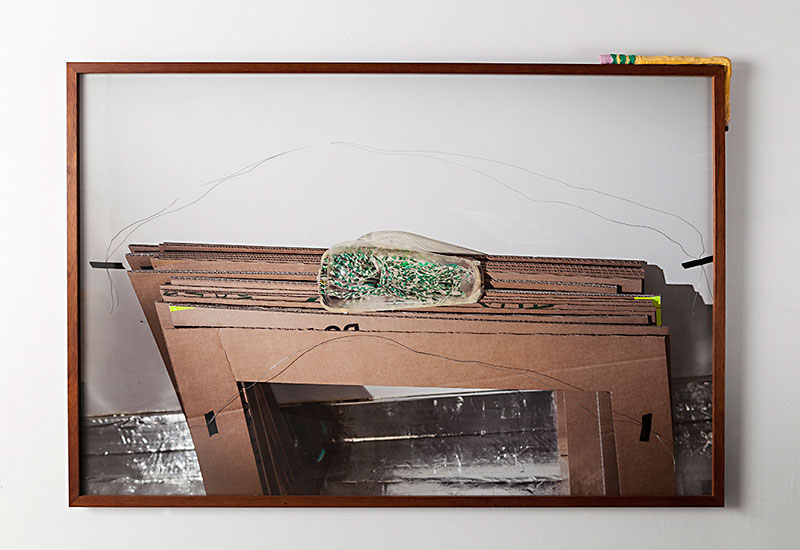 All of Michael Krueger's, Kathleen McShane's, and Barbara Weissberger's "Island Oasis Mirage" is in Weissberger's Slant and Bent Pencil. It is a 25" x 37" framed photograph of a stack of brown cardboard "arcs" leaning against a bare white wall. Attached to the wall above with black tape and curving across the length of the stacked cardboard is a metal wire. Another wire is attached with black tape to the cardboard piece closest to the viewer. The tops of the cardboard pieces slant down to the right while the floor slants up. It isn't obvious at first, but it is disorienting once noticed, making the whole image seem off-balance. Resting atop the stack of cardboard is what looks like part of a product's packaging, the plastic shell that might hold a toy or a set of batteries and which is typically backed by more cardboard. In this case, the cardboard backing is missing, but the plastic shell remains, filled with a coiled green and white cord. The dark wood floor at the bottom of the image is speckled with white paint. We are in some kind of work area.

The photograph is complicated enough, but Weissberger doesn't leave it there. The most surprising part of the piece is outside the frame, a larger than life pencil melting over the frame's top right corner. The pencil hugs the frame closely, distorted and soft-looking, like toothpaste, or a fat worm.

It is difficult to pinpoint a reaction to Slant and Bent Pencil. It's a photograph without a center, as though someone bumped the camera's shutter release by accident. The plastic shell with the green and white cord inside looks like an alien egg dulled into mundanity, as though the creature inside is dead. The shell is in the center of the image, but it is so average, so unassuming, that it is hard to think of it as the central figure, as holding any essential meaning or purpose. At the same time that the photograph has the crispness and refinement of intention – this artist knows what they're doing – it also looks haphazard, like note-taking. Not only does the piece seem to have no compositional center, but it also seems procedurally anchorless. Something is in the middle of happening. Work was being done when the phone rang or someone knocked at the door. The worker (or the artist, or whoever) left everything as is, without answers, without closure. It's all suspended midair. The pencil adds to that effect. In the moment of interruption, it was left to rest on the image's frame. Whoever left it there may never come back. They have been gone so long that the pencil has wilted. But there's a paradox here. How could the person working with the cardboard arcs in the photograph leave the pencil on top of the frame if the photo had not yet been taken? Additionally, why is the pencil larger than a real pencil?

The questions can go on and on, and that's only one piece. The entire show is chaos and order ingesting and disgorging each other like a Russian nesting doll. The space is similar to a bedroom, pieces placed in unpredictable, but ultimately sensible arrangement. It ends up looking like a planned mess, one that echoes a greater scheme. Someone, maybe the pencil's owner, has left it here to exist on its own, to act on its own volition. And so it does. "Island Oasis Mirage" is a clockwork universe. A perpetual motion machine.