A fierce portrait of Billie Holiday painted in blood and pain 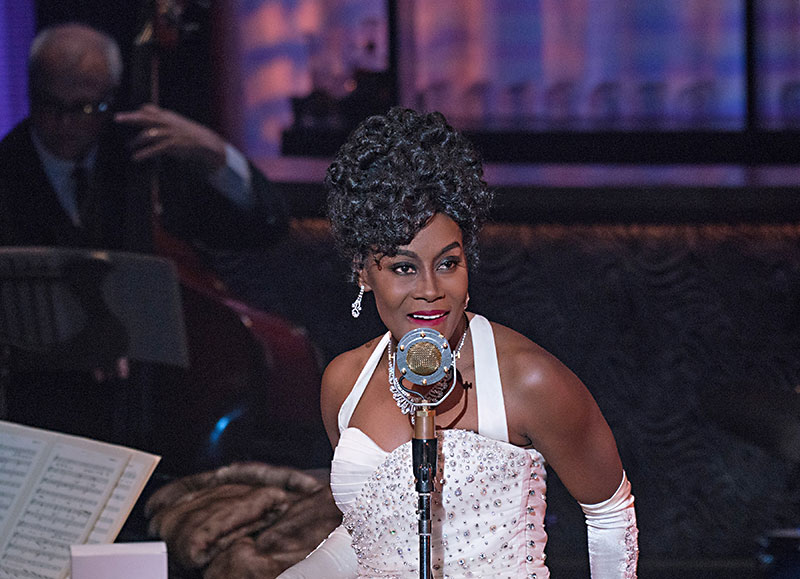 From the minute she descends to the stage, we can tell the state she's in. The less than steady steps down the stairs that shift to a wobbly shuffle on crossing to the microphone, the head that bobs, the eyelids that shutter in slow motion and seldom rise above half-mast, all betray her as a woman who is barely holding it together in a haze of booze and drugs. And once she gets hold of a glass filled with more of the liquid that dulls her pain, there's such desperation in her grip on it that we know this Billie Holiday hasn't much further she can go.

If all that Lady Day at Emerson's Bar & Grill had to offer us was the freak-show rush of watching a great talent at the end of a long skid downhill finally hit bottom and self-destruct, it wouldn't be much of a play. And similarly, if all Zach Theatre's production gave us was a sterling imitation of Billie Holiday's voice on some 14 numbers associated with the singer, it wouldn't be more than a flashy jukebox revue. But in creating this fictional version of one of Holiday's final gigs – the singer did in fact play a dive in Philadelphia just months before cirrhosis of the liver and heart disease took her life – playwright Lanie Robertson allows the alcohol in Holiday to open her up, to let her speak freely and bluntly about what's brought her to this place in her life, and in ways that a woman of color might not have back in 1959. In doing so, Robertson draws connections between Holiday's life and her songs that use the former to illuminate the latter, make them sound new to us, even the ones that we know note for note.

And as Zach's Lady Day, Chanel indeed manages an eerie evocation of Holiday's distinct vocal style, but what makes her performance still more remarkable is how she gives herself over to the sorrow and suffering of this Billie and makes her pain materialize before us. As she sings, Chanel's eyes sometimes lose focus, and her Holiday is submerged in memory, as if she's slid under the water in a tub but isn't aware of it. We, however, can see it and see that she's drowning in her past.

When it comes to the performance of Holiday's signature tunes "Strange Fruit" and "God Bless the Child," Chanel takes the lengthy introductory anecdotes provided by the playwright – relating experiences of racism, poverty, and abuse that shaped Holiday and scarred her – and suffuses them with a raw, searing pain that can't be numbed or medicated away. This is the feeling in which Holiday is immersed. It is the opening of her veins, and it allows her to bleed out as she sings. The sounds Chanel makes owe much to the artist she portrays, and yet she somehow makes the songs her own – we grasp personal expressions of anguish and affliction even as we hear a voice that last breathed almost 60 years ago. No doubt director Michael Rader and musical director Allen Robertson played some role in helping Chanel tap this difficult emotional vein, as do the onstage musicians who play with her every night: pianist Kris KeyZ, drummer Harrell Williams Jr., and bassists Lannie Hilboldt and Glenn Schuetz. But it is Chanel who must walk down Lady Day's path each night, must conjure that fog of intoxicants and make us see it, must expose her deep wounds and spill her blood before us. Ultimately, it is through her that we leave not only haunted by the tragedy of Billie Holiday, but also haunted by the understanding of it.