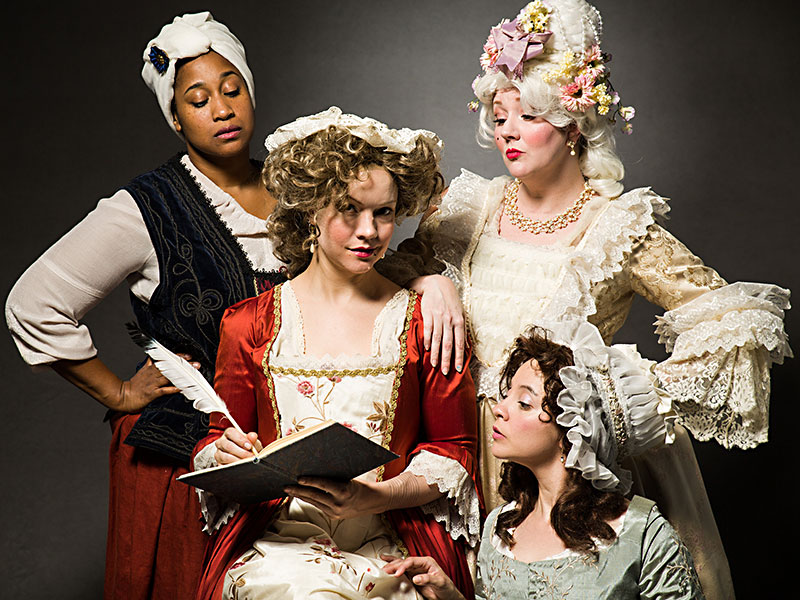 Olympe de Gouges is an artist with an agenda. In the heart of the French Revolution, she is pushing herself to write a story powerful enough to move the people of France toward an egalitarian democracy. She needs a story that embraces freedom. A story about epic heroism. A story about some badass women. And her timing couldn't be more perfect. Just as Olympe sits down to pen her life's work, three other revolutionary icons – Marianne Angelle, Charlotte Corday, and Marie Antoinette – come barging in with lofty agendas of their own. These ladies of note need a playwright – posthaste! An assassin's last words need to be composed, an elitist monarch with a fondness for wigs looks to do a little posthumous PR, and slaves toiling in Haitian sugar fields thirst for liberty!

Fortunately, Olympe de Gouges is quite the accomplished playwright when it comes to telling stories of revolution, abolition, and feminism. Unfortunately, she is also battling an extreme case of writer's block. At the moment, even the little decisions are too much (at one point, Olympe nearly has an aneurysm over whether or not to use puppets), and the tell-tale wads of crumpled paper under her desk have begun to multiply. As if artistic indecision isn't enough to drive her batty, de Gouges' frustration is exponentially exacerbated as three extremely significant historical figures with A Lot to Say vie for her attention with the passion and purpose of an under-quota canvasser in a Whole Foods parking lot. As each character draws closer to the guillotine's blade, de Gouges must write as she's never written before in order to document and preserve herstory in a world focused primarily on remembering history.

And now you know the plot of The Revolutionists, a thoughtful and utterly delightful take on the importance of telling stories set against an utterly horrific period of French history. Rudy Ramirez directs Shrewd Productions' latest offering, which features a flawless ensemble composed of actors Sarah Marie Curry (whose Olympe de Gouges is equal parts artist and mad scientist), Valoneecia Tolbert (as an extremely engaging, graceful, and quick-to-quip Marianne Angelle), Gricelda Silva (a scrappy and stab-happy Charlotte Corday), and Shannon Grounds (who comically softens Marie Antoinette, taking her from "Let them eat cake!" to "Aren't there any more snacks?"). This extremely entertaining production is rounded out with a minimalist but spot-on set design by Chris Conard and absolutely beautiful period costumes courtesy of Jennifer Rose Davis.

There are many themes running through Shrewd's must-see production, but ultimately, The Revolutionists is a story about the power and importance of telling stories. It's also about how difficult it can be to write them down sometimes, even when your protagonists are literally yelling their character arcs straight into your face. History may be written by the winners of wars, but storytellers and other artists guard the legacies of heroes because they know this to be true: Art can change the world more effectively than the guillotine ever will.