Zach Theatre's In the Heights 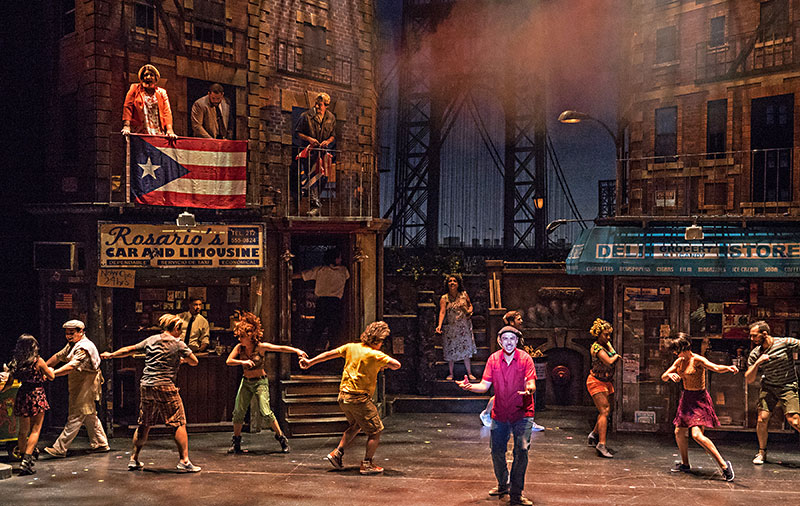 Maybe it shouldn't be so unique, this musical In the Heights. There should be probably lots of other artistically and commercially successful plays about a working-class, immigrant neighborhood, with stories that engender empathy but not pity.

But there aren't. Audiences at the big theatre companies don't often get to see the dignity of people who have grown up in a neighborhood that's about to get hit with a wave of gentrification. And In the Heights isn't the first major play to show life in a diverse Latino community, but at a point in history when anti-immigrant sentiment seems ubiquitous, it feels like a bold expression of identity.

So it may be that 20 years from now, In the Heights will be a theatrical footnote compared with writer Lin-Manuel Miranda's other work (Hamilton, anybody?). But right now, it's important to reckon with what In the Heights offers.

Two storylines out of several grab most of one's attention. Usnavi (Keith Contreras-McDonald), who owns a bodega on the corner, has been in love with Vanessa (Alicia Taylor Tomasko) but unable to work up the courage to let her know. He's also eager to make something more out of his life, just as she's desperate to get out of the barrio and out into a life of her own. Meanwhile, Nina (Cristina Oeschger), the hardworking girl from the neighborhood who could do no wrong, has returned from her first year at Stanford. Only, she's lost her scholarship because it turns out that working two jobs to afford the rest of college makes studying hard. Benny (Vincent J. Hooper), who works for her parents, gives a kind and understanding ear, and he's exactly the guy you'd want your daughter to date if you didn't have a proud, patriarchal streak that screws up everything (Fernando Acevedo as Nina's father Kevin).

The biggest criticism of the show may be that with so many complex threads weaving through the life of this neighborhood, it's hard to imagine all of them finding such a tidy resolution in three days' time. But this play (Miranda wrote the music and lyrics, Quiara Alegria Hudes authored the book) is about a community, not a character or a family or an issue. That it gives a satisfying end to its many stories, each of which is complex in its own right, rather than treating the lives of its characters as tragic, is important right now.

Michael Balderrama's direction is strong and well-paced, and Allen Robertson's musical direction is excellent. Oeschger as Nina and Tomasko as Vanessa are two standouts among the cast, but with such a strong ensemble one can imagine a casual poll of the audience would turn up a long list of favorite performances.

Anna Louizos's set exemplifies the balance that this production of In the Heights strikes. This block is rough around the edges, but it has pride and a lot of different kinds of people making things work. Most importantly, there's life here, and it's a lot of fun to watch.