As an elegy to the ice, this dance aestheticized doom but left us plenty of edge 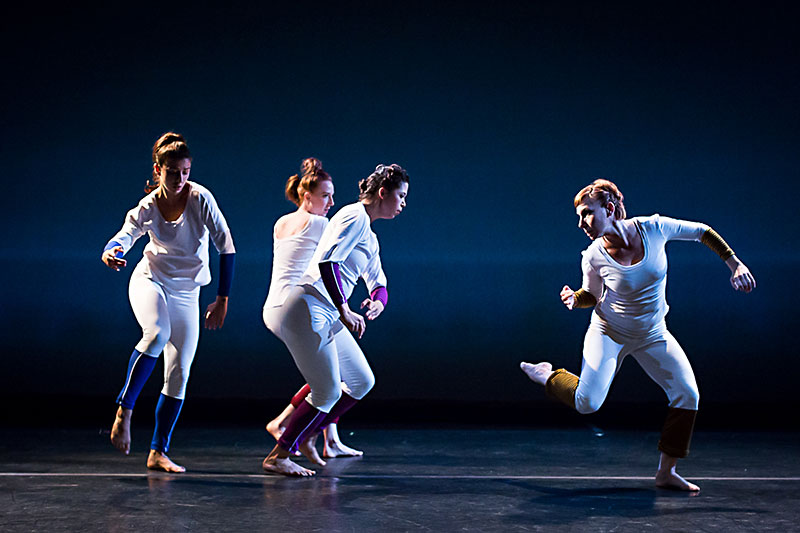 Given the pensive direction that choreographer Kathy Dunn Hamrick's work has taken lately – the subtle resistance of last fall's The Four (3) Seasons, the driving inevitability of last May's More or Less – I expected a dance called Glacier to hurt. And then, opening night happened to fall on the same day the president announced his decision to pull the U.S. out of the Paris climate agreement. After the show, the dancers didn't even bow. "It's over," mouthed lighting and sound designer Stephen Pruitt from his spot at the back of the house when the audience wasn't sure what to do.

As an elegy to the ice, the work aestheticized doom but left us plenty of edge. For this work, Hamrick supplemented the seven dancers of her company, in aqua mesh tops and leggings, with just as many guest artists, in white pants and raincoat-like jackets. The guest corps functioned as both a chorus, amplifying the action, and a second layer, absorbing and reacting to the motions of the first – a reminder that nothing occurs in isolation. Pruitt's sound design, an amalgamation of percussion and atmospheric electronica, set an ominous tone beginning with an unsettling low rumble, present even as the audience entered the theatre. The lighting, on the other hand, began in the idyllic: dapples of violet and blue, reflections off the ice and water, danced across the walls – their exposed rough bricks serving well to situate us in a natural world – as a gentle sun warmed the dancers' upturned faces.

Before long, however, reflected light gave way to shadows, and the projections morphed into blurrily human forms. The guest corps dancers lined the back of the theatre and were the first to melt into the floor; once that happened, it wasn't long before they slid, viscously, offstage. Groups of company dancers began in majestic stances and deep-cored movement, engineered from the whole torso. They broke off in floes, were swept up by currents, shattered into jagged shards, and tumbled over each other in gyres, and they, too, eventually melted away.

But to say that the dance was about melting ice would oversimplify things. Perhaps the work's greatest accomplishment was convoluting objective events of physical change with the wilderness of human emotion, imbuing water molecules with feelings of loneliness, community, fear, and loss of control. The last dancer onstage, Jessica Boone, clasped a partner's hand before her abandonment and final furied solo. The solid, unhurried glacier holds itself together with aplomb we might aspire to, until it falls apart, dispassionately and impressively, in chunks and fissures. As audience members, we keep vigil to all this, but there is, it seems here, nothing we can do.

Rollins Studio Theatre at the Long Center, 701 W. Riverside
June 1
A version of this article appeared in print on June 9, 2017 with the headline: Ice Flow