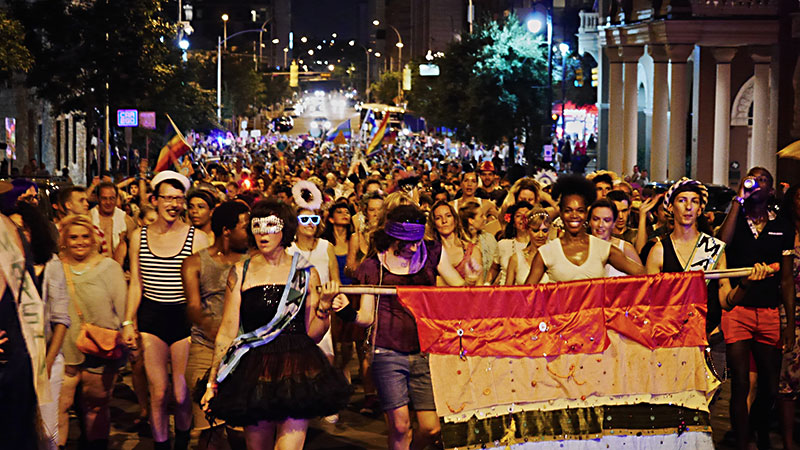 Queerbomb has survived. Despite conjectures that the new organizers didn't have enough time, resources, and cash to throw 2017's alt-Pride, permits have been pulled, contracts have been signed, and banners have been decorated.

Getting to June 3's three-part event (consisting of a rally, procession through Downtown, and dance party celebration), however, has been an uphill battle. Last year's heated infighting among Queerbomb founders created tension over whether or not the beloved DIY-protest-meets-festival would survive 2016. Weeks before the event, a town hall addressed the issue and the creators ushered in some much-needed new blood. In the end, 2016 went off without a hitch. Once the glitter was swept away, the remaining founders – including Paul Soileau, PJ Raval, Tamicka Phil­lips, and Matt Korn – handed over their knowledge, spreadsheets, and city contacts to the fresh batch of optimistic queers.

For the new team, consisting of approximately 10-12 core members (including several returning volunteers who have stepped into larger roles), money has been the ultimate issue. In early May – one month out from the event – bombers found themselves short $10,000 despite their best efforts to fundraise.

In true last-minute fashion, the community came out in support. By May 26, more than $8,400 had been donated to the crowdfunding campaign, which organizers launched in March. According to Ash West, QB's new money handler, the event has now raised more than $11,000 – meeting past fundraising goals. Unfortunately, Joya Cooper, QB's new outreach coordinator, confirms that this year's event will cost $15,000, several thousand more than in the past two years and two-and-a-half times as much as in 2014.

Like the rest of Austin, Queerbomb is not immune to the city's ever-increasing prices. With rising rents and high property taxes, the fee for Fair Market, which has housed Queerbomb since 2015, has also increased (charging approximately $7,000 for the night). Organizers considered new, cheaper digs, but they ultimately reselected the event space for its size, all-ages capacity, and location. Fair Market is the only venue near the Downtown procession route large enough to accommodate the crowd of roughly 5,000.

For many attendees, it's the sashay down Dirty Sixth – the "straightest street in Austin," as a Queerbomb speaker once put it – that makes the event so powerful. If the procession were rerouted, organizers fear the event would lose value. "The heart of Queerbomb is the march because it's all about visibility," says Brian Zabcik, another new volunteer who previously worked with AIDS activist organization ACT UP. "It's forcing the [straight] world to look out and see the queer community ... it doesn't make sense to have a march if no one sees it."

Last week, QB organizers, still short on funds, were crunching the numbers to determine whether they could afford to keep the celebration at Fair Market. But on Wednesday, May 24, West confirmed that the North Door – Queerbomb's alcohol vendor for the past eight years – donated its sound system and a large sum to help bridge the budget shortfall. "It's been a lot of work getting this far. To come so close and be faced with having to cancel the celebration was a serious blow," says West. "I'm so thankful to North Door for going to bat for us."

Since its creation in 2010, Queerbomb has been anti-corporate sponsorship, adamantly all-ages, and 100% free of charge. Like the founders, the current organizers agree that all three aspects are non-negotiable. Additionally, the new crew has hustled to include even more of Austin's queer, trans, and QPOC communities of all ages. Speakers for Saturday's event include Chayla Cooper from Austin Black Pride, and Topaz – "the oldest drag queen in Texas" – will emcee the rally.

As for 2018, Joya Cooper is certain this year's core organizers will return, especially given the current political climate. "Queerbomb is a response to everything we need to fight against," she says. Zabcik adds: "We're not taking money from corporations. It is harder to do it this way, but this is what makes Queerbomb different – this scruffy, DIY, impolite event does a lot to keep the city weird."

A version of this article appeared in print on June 2, 2017 with the headline: Keeping Austin Queer’d 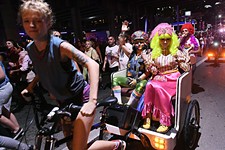 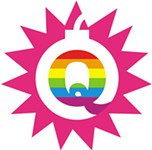 Passing the (Queer)Bomb
What's the future of the June celebration for Austin's LGBTQ community?