Nina Katchadourian's Indecision on the Moon

The Apollo 11-inspired work, housed in a pitch-black room at the Blanton, may tell us how adventurous or conservative we really are 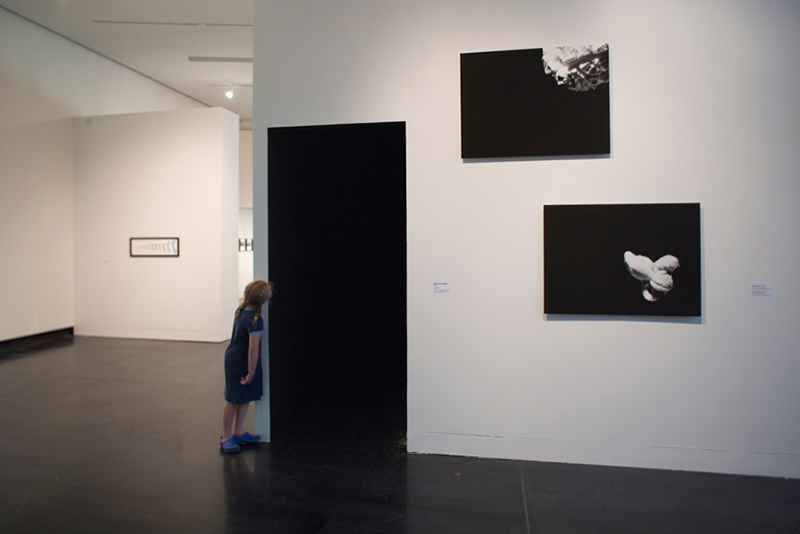 Experts have assured you everything will go as planned, but nobody's ever done this before. Be prepared to be shot beyond everything you know while inside a metal tube full of exploding jet fuel made by a bunch of guys to ultimately hit a rock 238,900 miles away.

I'm simplifying, of course. Simplifying is also what Nina Katchadourian has done in her space odyssey (actually created in 2001), Indecision on the Moon, in the Blanton Museum's "Nina Katchadourian: Curiouser" exhibit. It's just a dark room. You are warned of the darkness before you go into it, and you hear someone trying to make contact ...

Katchadourian cut and pasted the interminable umms, uhhs, and trailing sentences of the Apollo 11 moon landing transmissions into a loop. It is an epiphany to hear that these geniuses, these brilliant scientists who designed it and the astronauts brave enough to get in, actually have these words in their vocabularies. Makes you wonder if they really had it all figured out up there. They worked on best estimates on lowest-bidder tech.

Blanton visitors don't have to go all the way to space, but the pitch black of Indecision is still daunting. A wall curves the path into the room to help diffuse light from the rest of the museum, and beyond that it appears you go either left or right. A patron ahead of my wife and me turned right and walked smack into a black wall she assumed to be an entrance – failure to launch. Warily, we went left to the actual entrance and there our mission began. First, I grabbed my wife's hand, because who could say if we would ever find each other again? Then we stepped into the mystery.

I could hear others in the room talking low under the fuzzy, interstellar mutterings of the Apollo crew and mission control, but I couldn't see anyone. Every so often, that short, high-pitched NASA beep would announce itself, and eerie radio static was constant. When someone cheated and flashed their phone's light, I could see the room was only about 50 square feet. After it was turned off, our eyes adjusted to the darkness, and my wife and I let go of each other's hands. The room emptied for a minute with just us and a woman speaking French to her toddler. Their hushed conversation mingled with the transmissions and brought home the global importance of the mission: We're all in this together.

They departed and we were left drifting alone out in the ether. That's when the real fun began: watching other patrons enter the room, or try to. We silently observed those who would come around the corner and just peek their heads in, or take one small step. Contrasting them with the folks who walked in as if on a tightrope or investigating a strange sound in the basement was extremely entertaining. In the 20 minutes we watched, not a single person just strode in, and most were understandably cautious. There was nothing at stake entering Katchadourian's space. How afraid were Buzz, Neil, and Michael?

Admissions assistant Pamela Heller had a very different experience with the room: As a child, she watched the moon landing live on television, like millions of others, and a gamut of emotions flooded back to her: excitement for the future, pride in knowing her father who worked at NASA had a small hand in this endeavor, and, of course, fear and the knowledge that any time communications went dark with Apollo, it could be the last Earth heard of them. She remembers being scared of the silence. Everyone there experienced only a dark room, but what our minds created to fill the void changed due to our own generational biases, imaginations, and where the moon landing lands in our own histories.

Author George R.R. Martin writes that the only time someone can be brave is when they are afraid. Indecision on the Moon is a telling experience to discover how adventurous, or conservative, we really are, and how each of us handles life's certain uncertainties that lie at every corner.