For the arts and culture to take root in a city, to develop and flourish there, and then to make them not only vibrant but vital, requires real dedication from citizens who believe that it matters. In our own city, it is those artists, educators, patrons, and arts advocates who have devoted their time and effort into making the work and founding the institutions and providing the support for theatre, dance, classical music, and the visual arts – not just occasionally but consistently over many years – who have made Austin a capital of creativity. It's precisely those individuals that the Austin Critics Table has sought to recognize in the Austin Arts Hall of Fame, and the four people being inducted this year are exemplars of that commitment to making the arts grow and thrive here. Each is a master in his or her field, making contributions that enrich and inspire us, but each is also notable for creating opportunities for others to develop as artists: teaching, mentoring, running spaces, collaborating on projects. Their generosity and constancy go beyond the admirable as personal traits; they benefit the entire community, in making space for new art, nurturing new artists, and ensuring that creativity here continues to thrive. The Austin Critics Table will induct them into the Hall of Fame during the Critics Table's annual awards ceremony – the most informal one in town – Monday, June 5, 7pm, at Cap City Comedy Club, 8120 Research. Here is a brief intro to these cultural heroes. 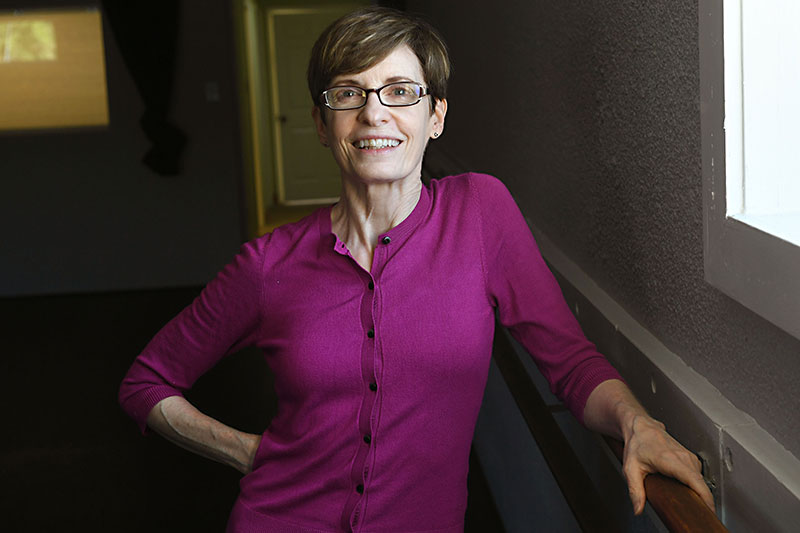 Photo by John Anderson
Having the word "circuitous" in the name of one's dance company might suggest a meandering nature in its founder, but there's nothing roundabout in Kate Warren's approach to her chosen art form. Over four decades, her presence on the local dance scene can be tracked in an unwavering straight line: in the Seventies, performing with experimental modern dance duo Dee McCandless and Gene Menger; then moving with Austin Repertory Dancers in the early Eighties and its successor, Sharir Dance Company, where she spent most of the rest of the decade, becoming associate artistic director and director of the Sharir Company School; performing with Johnson/Long Dance Company in the first half of the Nineties; co-founding and running the Hamrick/Warren Dance school with friend and artistic partner Kathy Dunn Hamrick (1991-present); founding and running the studio Cafe Dance (1995-present); and, finally, founding her own company, Kate Warren/Circuitous Dance (2013-present). Grounded in the techniques of Merce Cunningham, Martha Graham, and José Limón when she was a student at Texas Tech University, Warren has continued to feed her fascination with modern dance – "how to teach it, how to structure it into choreography, how to perform it," in the words of Hamrick – and is now also working to pass what she has learned through the years on to others. With her characteristic generosity and artistic dedication, she is seeing to it that the straight line she has followed in modern dance extends to future generations. Plus, as Hamrick revealed to the Chronicle a few years ago, Warren has two qualities that make her an invaluable creative collaborator: "1) she has a great sense of humor and makes me laugh; 2) she tells it like it is." 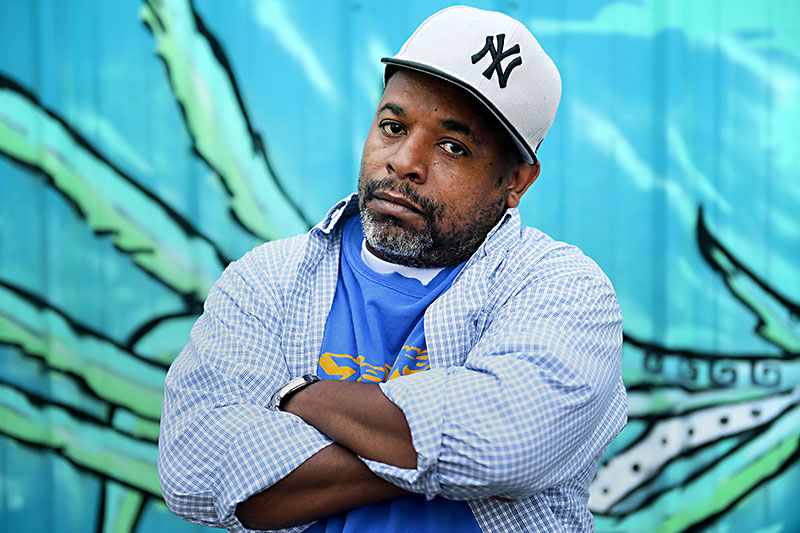 Photo by John Anderson
Words have power. Every performance by Zell Miller III is a potent reminder of that, a fierce lesson in language's ability to crack open any issue, pierce any position, slice through bullshit, and lay open the truth within – exposing the deceit, hatred, injustice, or the beauty, hope, light. Miller began schooling Austin in this in the early Nineties, first in poetry open mics at Chicago House (where he'd have to call in with a fake name or they wouldn't put him on the lineup); then on the slam scene, where he was winner of the 1999 Heman Sweatt Symposium Slam and 1999 Austin Poetry Slam, a member of Austin's team in the 2004 National Poetry Slam, and a featured performer at the Austin International Poetry Festival and SXSW; then in his solo shows. These last were shaped by his experiences acting in productions at Hyde Park Theatre during the Frontera era, where he worked with cutting-edge writers like Sharon Bridgforth (blood pudding, con flama), Erik Ehn (Heavenly Shades of Night Are Falling), Naomi Iizuka (Polaroid Stories), and most importantly, writer/director Laurie Carlos, who became Miller's mentor and "theatrical mother." With the lessons she taught him, Miller made one-man shows such as The Evidence of Silence Broken and My Child, My Child, My Alien Child that reached new audiences, and he's continued to cultivate them with original theatre works involving multiple artists (Radio Silence: a word opera, Hands Up Hoodies Down, Ballot Eats the Bullet) and plays that he's directed (Hunger, For Colored Girls Who Have Considered Suicide When the Rainbow Is Enuf). The thread through it all has been Miller's political voice, one of the few on the performance scene speaking out consistently over the past 30 years, and it's only grown more powerful and inspiring in the era of Black Lives Matter and Trump. He's been not only one of Austin's most prominent African-American performance artists in the 21st century, but also a vital mentor for a new generation of local African-American artists. When their work shows they understand words have power, you can tell who taught them so. 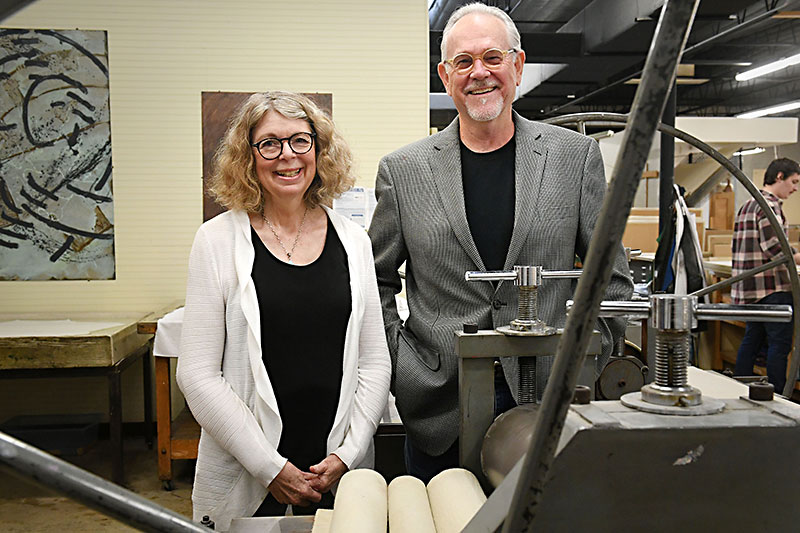 Photo by John Anderson
When Katherine Brimberry and Mark L. Smith co-founded Flatbed Press, they didn't just create a facility for making high-quality fine art prints, they established a creative laboratory where artists from anywhere on the planet could come with impossible ideas for prints and see them put on paper. They might just as easily have named it Flatbed Research and Development Institute, because their mission in printmaking has been to attempt the unconventional, to take risks, to experiment, to be inventive and innovative. That sensibility was in the DNA of Flatbed before the idea for the press had even formed, when it was only a notion that Smith, by training an artist and art historian, had to produce an unbound boxed suite of prints combining text and image. But in asking Brimberry to be the project's master printer, Smith opened a larger conversation about creating a space where printers could work and an informed audience for prints. They shared such a strong affinity for the concept of a new printmaking space that soon Brimberry was taking out a personal loan and Smith was selling a restored 1950 Chevy, and with the money the two launched Flatbed Press in a 2,000-square-foot warehouse space on Third Street in 1989. Forced out of the area by rising rents 10 years later, the duo took over an 18,000-square-foot industrial building on East MLK and converted it into a venue with offices and gallery space not just for themselves but for other arts groups, too. Thus, what was then dubbed Flatbed World Headquarters was as much an arts community space as a new home for the printmakers. (It currently houses Gallery Shoal Creek, CAMIBAart, Photo Méthode Gallery, Austin Book Arts Center, 26 Keys Inc., and six artist studios.) The venue can be seen as one more bold Flatbed experiment, and one that's succeeded as richly as its extraordinary prints, created with artists that include Robert Rauschenberg, Terry Allen, Julie Speed, Keith Carter, Melissa Miller, Luis Jiménez, and Michael Ray Charles. What Smith and Brimberry started, and Brimberry still oversees, has resulted in 25 years' worth of treasures.
A version of this article appeared in print on June 2, 2017 with the headline: Fully Committed