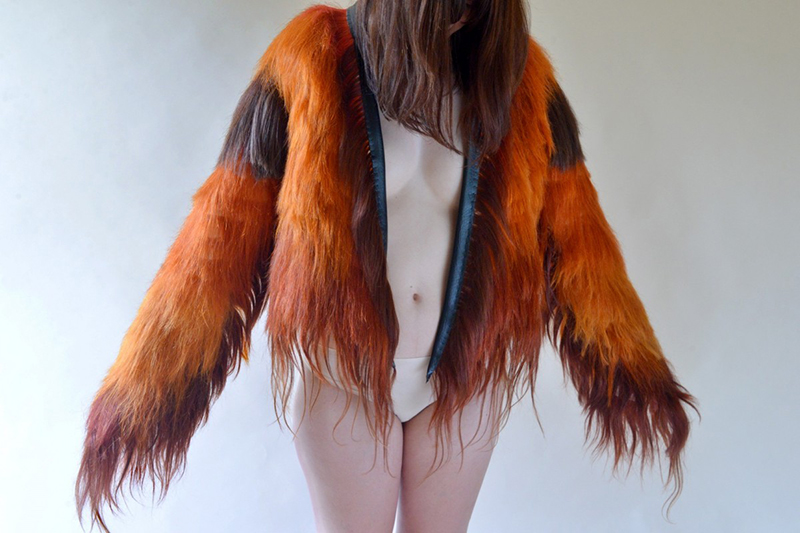 Standing in the middle of Abby Bagby's "Kingdom," a circle of femmes fatales mannequins draped in haute couture made from human hair, is something like being in the presence of a hostile tribe. The white mannequins themselves are not especially sinister. They wear the indifferent expressions of any JCPenney mannequin or of slinky models traipsing over the catwalk. Their mouths are closed, their eyes are pale and sans pupils. Their flawless bodies, bald heads, and relaxed expressions make them look like aliens. It is really Bagby's clothing that distinguishes the seven figures and which makes them seem hostile, because one has to ask where the hair came from. Who was killed? Who was skinned?

Despite such terrifying questions, the figures are beautiful, something like demigods, perfect and ice cold. One stands with her pelvis thrust forward, hands on her hips. She wears a jacket made from long orange and brown hair. When we are so used to describing materials as being made with "fur," it is bizarre to transition to the term "hair." Hair, most often, is not something to be worn, especially as clothing. However, the jacket the mannequin wears is well-constructed. The mannequin itself looks directly at us, and seems to suggest we may be the stupid ones for not understanding.

That forthrightness is evident in all of the mannequins. Another wears a sort of skimpy lingerie made from what looks like balls of dark hair that have been glued together. The hair balls are gathered on the mannequin's shoulders, stomach, back, and rear end. Each cluster is connected to the others by a thin chain. It is a sophisticated, even sexy piece, though the muddy brown, hairy balls remind me of, among other things, animal feces. This time the model, breasts uncovered, looks past us, uninterested, as if any rube should know that wearing hair balls that resemble feces is all the rage.

That may be the power of high fashion models generally, that they can make anything plausible. This human hair line is repulsive. It makes me think of collecting someone else's nail clippings, eating cheese made from human milk, or even the eating of placentas. It is also in the lineage of the Victorians' macabre hair art, the framed relics of dead loved ones. Yes, these are our bodies. But there is something about this detritus, these bits and pieces, that is unsettling. Bagby's hair pieces seem extreme, but I wouldn't be surprised to learn it had been tried by a fashion designer somewhere.

Flesh-and-blood models are as real as anyone else, but their work is to be otherworldly, frigid, and inanimate as the mannequins in Bagby's show. So if I'm disgusted by the absurdity of fabrics made from hair, their similarity to more typical clothing should give me pause. One mannequin wears a large, manelike orange piece that drapes its torso. Another wears a black and gray swimsuit with a frizzy silver scarf. "No one would ever wear this stuff," I say to myself, but how often has that thought crossed my mind looking at any high fashion concept? It is odd how something made with human material can begin to seem inhuman, but that is what happens here. And that may be what is intimidating about standing in the center of Bagby's circle and surveying the placid faces looking back. I begin by wondering where this tribe of machines found its human victims, and who will be next. Standing in their circle, being watched, I begin to know it is me.