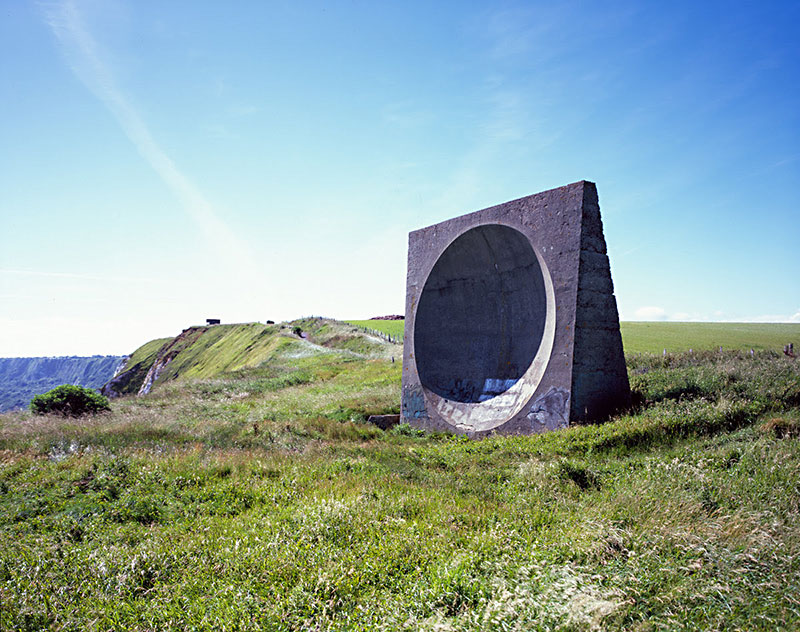 There's something desperate about photography. It may be the most needy of the traditional media. It is also one of the newest, having been invented only in the 1830s. Its reason for being is its ability to hold reality, like an ancient mosquito captured in sap. If that unique quality is in doubt, what, then, is its purpose? Early photographers seemed to have grasped the medium's questionable veracity. Even 19th century photographer Charles Dodgson, aka Lewis Carroll, an avid portraitist, was compelled to paint color into some of his images of children. Clearly, for Dodgson, black and white stills were inadequate. He had a sense, even then, that photography was grasping at intangibles.

Over a century later, Robert Collier Beam's "Scry" dwells on those intangibles, though while his primary medium is also photography, Beam manages to go beyond the evasiveness of the image to the evasiveness of some even more basic elements. Abbot's Cliff Sound Mirror – Strait of Dover is a picture of a "sound mirror" built during the World War II era for the purpose of amplifying the noise of approaching aircraft. The sound mirror is perched on a cliff overlooking the ocean. As Beam's camera translates light and shadow into a negative, and then a print, the sound mirror takes what is unheard out of thin air and translates it to something we can hear. The old Zen question about the tree falling in the woods is meditative, but it is also scientific: If there is no one around to hear it, it definitively does not make a sound. Similarly, if there is no eye, there is no image.

The effectiveness of Beam's pursuit is deepened by Section of Abbot's Cliff Sound Mirror, prints made from charcoal rubbings of the stone mirror itself. The prints are displayed in an overlapping line that makes an arc echoing the curve of the sound mirror's "ear." Each individual print is black and white, with a textured, sparkling surface over a darker, flatter one. Without having read the title, I spent several minutes composing a narrative around the piece as photos of waves lapping a beach. Even after taking into account the prints as charcoal rubbings, the notion of waves persists, and rightly so, as the essential untouchable, unhearable, unseeable entities at the heart of all of this are, in fact, invisible waves of sound and light.

Photography is, and always has been, a medium of light, which is what makes Beam's series of four cosmic images so appropriate. The four are displayed side by side. Each represents a field of stars in a black sky. Actually, Points of Origin, I'm told, represents a circle of poppers (the kind you can buy at Target around Fourth of July) thrown onto a contact print, which captured their explosions. This doesn't detract from that piece's expansiveness, as it is no less a mimesis of light than is Rearranged Hubble Composite, a collection of four separate Hubble Space Telescope photos of swirling galaxies and stars. When I see NASA images of deep space, I ache to know what I'm looking at, to be able to see and touch more clearly. I'm desperate, engaged with photography's more quiet need, a sensation heightened by the melancholy truth that the sources of those lights may have long died out. Beam's shuffling of Hubble images reflects that agitation. Despite all that agitation and need, the show is remarkably still, as though Beam has found peace with the mysteries of what he can't have or know. If that is so, I envy him.