“The Geometry of Space and Time” at Mexic-Arte Museum 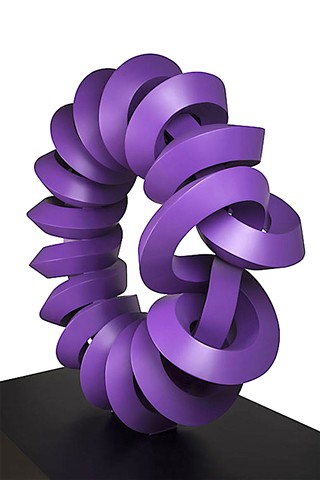 In 2002 a public sculpture was raised near San Antonio's city center, not far from the Alamo and the River Walk. It is a bright orange loop that sweeps up in two thick columns then swirls like a hook at its crown. It is sleek, dynamic, and well-integrated into the old part of an old city.

The piece is called Torch of Friendship, and was designed by Mexican artist Sebastián. The retrospective, "Sebastián: The Geometry of Space and Time," covers his broad range of work, from digital prints to dresses and jewelry. The stars, however, are the sculptures. One, Torus Knot, is a large purple circle made, like much of the work on display, from iron and acrylic. The circular frame of the piece extends and wraps around itself so that it resembles a thick ring constricted by cords of metal. Nearby text explains that Torus Knot is one of a series called Parallel Universes which "is composed of artworks that explore mathematical and philosophical concepts of the Multi-verse and String theories." That sounds pretty cool, but it's hard to imagine someone looking at Torus Knot and thinking to themselves: "Multi-verse and String theories, definitely." The piece, with its pristine purple coloration and flawless body, looks more like a beautiful toy or decorative ornament. The same can be said of A Sun for Matthew, which looks like a man-sized red asterisk, or Yellow Dress, which reaches toward the ceiling and concludes with a humble overhang.

While the show emphasizes Sebastián's relationship with mathematics and theoretical physics, those concepts seem incidental to the work itself, the same way the rhetorical strategies I'm using right now should be tangential to this review. The pieces that seem most closely aligned with mathematics are digital prints like Tied, a violet unfurling of angles and lines coming out of a black background. Their computer generated aesthetic would seem to fit within the visual language of the sciences, but compared to Sebastián's sculpture, they are rather forgettable.

Regardless of their conceptual genesis, the sculptures make a fabulous spectacle. Their unapologetic colors and outrageous forms dominate the space. Even the more subtle pieces, like the bronze Parallel Quantic, which sits on a pedestal and is much smaller than some of the others, is confident and precise enough, and so well-balanced between sharp edges and smooth surfaces, that it commands attention.

It's fun to see the many, sometimes ill-advised, forms Sebastián has applied his geometry to. His line of angular outfits for women is laughable, but I have to hand it to the guy for trying. He's also made some cardboard sculptures meant to be manipulated by hand. An accompanying video shows the artist himself playing with the handheld sculptures, and a nearby interactive exhibit encourages visitors to "Make your own geometric shapes."

In the end where Sebastián really shines is in his monumental public works. Objects which are slightly overwhelming in a room are as graceful and awe-inspiring as redwoods when placed in the right outdoor space. Torch of Friendship enlivens, and complements, its location in San Antonio, the same way Alexander Calder's Flamingo does in Chicago's downtown Loop (one of Sebastián's cardboard pieces is titled Tribute to Calder). Monumental works depicted in miniature and in photographs can't be expected to exude their full power inside a gallery. However, their potential, at least, can be recognized, and anyway, potential is process, and process is potential. It is an agreement that is central for an impulsive maker like Sebastián.

“Sebastián: The Geometry of Space and Time”