Getting to Oz Through Austin Arts 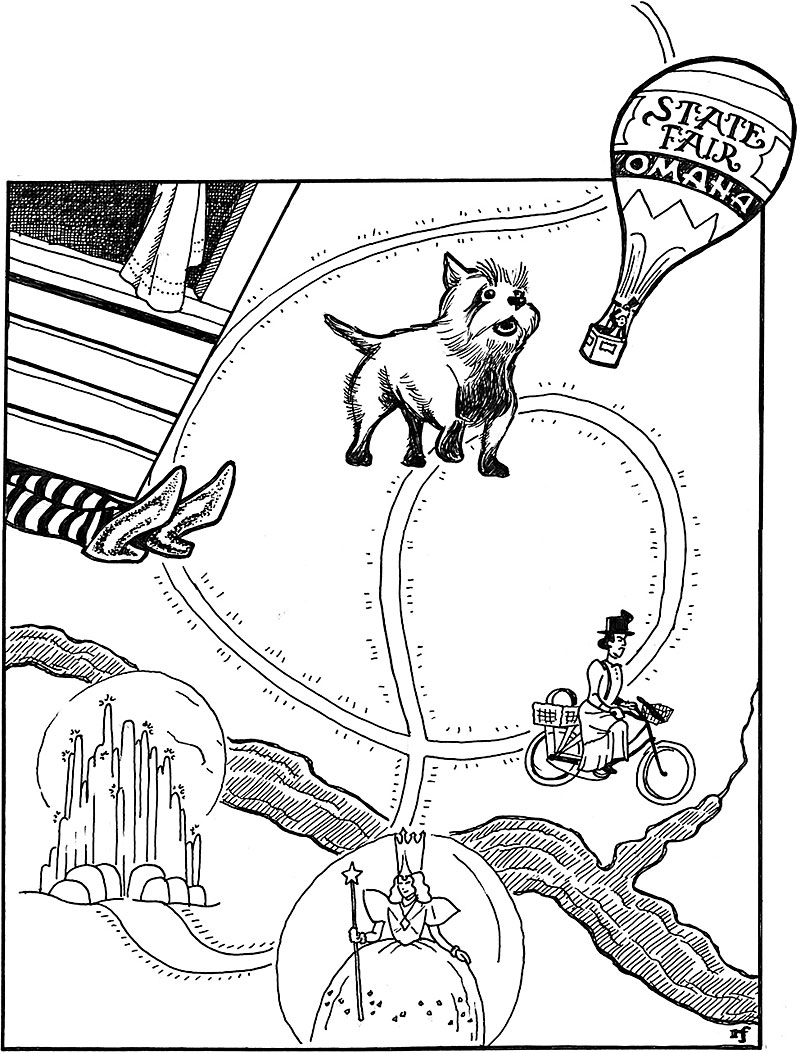 Summer is the season of travel, of leaving your humdrum, gray existence for somewhere colorful and adventurous. You may be familiar with a wide-eyed young Kansan who set the standard for such getaways with her extreme vacay from the Sunflower State to the Land of Oz. Well, this year, the Zilker Summer Musical will transport audiences to the Emerald City, Munchkinland, and points between with a production of The Wizard of Oz, and we've been considering how to get you over the rainbow, so to speak. During the show's run, July 7-Aug. 12, you could convey yourself to the Hillside by some commonplace motorized contraption such as a car or bus, but hey, where's the fun in that? And while we've nothing against road trips of the automotive variety, we can't imagine the 1939 film possessing quite the same charm had Judy Garland followed the Yellow Brick Road in a Studebaker Champion. So in the spirit of the story, we've mapped our own way for you to go off to see the wizard, with stops at some off-the-beaten-Brick Road artistic projects that incorporate modes of transport in The Wizard of Oz.

For our Summer Fun issue, we’ve created themed playlists to go with each story. Find more playlists at austinchronicle.com/summer-fun.

Before he claimed the title of Oz the Great and Powerful, the wonderful wizard was just another mundane Midwesterner, like Dorothy Gale. But what he had that Dorothy didn't was a hot-air balloon, and it was in that that Oscar Zoroaster Phadrig Isaac Norman Henkle Emmannuel Ambroise Diggs made his passage from Nebraska to a land of wizards and Winkies and witches (oh my!). But years before L. Frank Baum put his gasbag in a gasbag, Jules Verne set characters aloft in the same device in, not Around the World in 80 Days (despite that bit in the 1956 film version with David Niven as globetrotter Phileas Fogg) but the lesser-known Five Weeks in a Balloon. Now, that novel isn't being dramatized locally, but Penfold Theatre has created a new adaptation of Around the World in 80 Days for its annual free outdoor production in Round Rock, and as writer-director Emily Rankin has changed Phileas to Phyllida for this version, perhaps she's worked in a balloon, too. June 1-24, Thu.-Sat., 8pm, Round Rock Amphitheater, 301 W. Bagdad, Round Rock. www.penfoldtheatre.org

Direct routes from the Plains states to Oz may be accessed by unconventional means, as in Dorothy's case, via house. While to date no evidence exists of a local domicile having made the trip, several give the appearance of having come from there. One such is the Charles Moore House, the last residence and studio of the marvelous architect, author, and educator, on the Westfield neighborhood compound he shared with professional partner Arthur Andersson. Its extravagantly colored and patterned interior, packed floor-to-ceiling with folk art, books, toys, models, masks, and more would fit comfortably among the eclectic, eccentric, and playful digs in the Merry Old Land of Oz. Now preserved as a center for architectural studies, guided by Moore's principle that "good places matter," this is a place so good – and enchanting – that you might not mind somebody dropping this house on you. Public tours by appointment. 2102 Quarry. 512/220-7923. www.charlesmoore.org

The two-wheeler was the transportation mode of choice for Almira Gulch, the joyless, vindictive neighbor of Dorothy's Aunt Em and Uncle Henry, and she favored it so fiercely that even a Kansas twister couldn't dislodge her stranglehold on the handlebars or keep her from pumping the pedals. One wonders, then, what this zealous cyclist would make of a new work of public art in Austin: Forever Bicycles. This installation by international artist and activist Ai Weiwei consists of more than 1,200 bikes stacked on one another and forming an archway that people can move through. The Contemporary Austin and Waller Creek Conservancy, which teamed up to bring this and a second large-scale work by Weiwei to the city, are setting it up at the Waller Delta, where Waller Creek and the Hike and Bike Trail meet. Public opening Sat., June 3, 10am-noon, at the Waller Delta, 74 Trinity. www.thecontemporaryaustin.org

When Dorothy's canine comrade Toto decided he'd had enough of Miss Gulch's dognapping scam, he took a leap from the back of her bike and scampered back to safety on the trusty means of transport he was born with: his four legs. (They served him just as well when escaping the green-fingered clutches of Gulch's doppelgänger, the Wicked Witch of the West.) Turns out the local improv scene has in its ranks a performer who also knows the value of moving on four legs and knows it firsthand, er, paw. He's Steve Scott, titular star of ColdTowne's weekly show What's the Story, Steve?, and he happens to be a poodle. Each Saturday, he aids ColdTowne's resident Improv for Youth Troupe and a few adult improvisers in creating a tale from scratch. Wonder if he's invented one about escaping from the castle of a meanie in a pointy black hat? Saturdays, 10am, ColdTowne Theater, 4803 Airport. www.coldtownetheater.com

Getting to Oz is one transportation issue; getting around in Oz is another one altogether, what with all the haunted forests, snooze-inducing poppy fields, apple-throwing trees, and whatnot to navigate. Glinda, the Good Witch of the North, manages to avoid such travel hazards by flying above them in the most customized of vehicles: a bubble. Where she mastered the art of flight in a bubble is anyone's guess – Shiz University, perhaps? – but if you're going to follow in her footsteps, the one spot in town where you stand the best chance of learning about all things bubbly is Bubblepalooza. The Long Center's annual day of open play features snow cones; foam pits; a graffiti wall; music by the Hey Lolly Band, the Biscuit Brothers, and the Saddle Sores; and more, but the big draw, of course, is those Glinda-sized bubbles. Sat., June 3, 9am-1pm, at the City Terrace at the Long Center, 701 W. Riverside. www.thelongcenter.org

You're Over the Rainbow!

Your magical journey has landed you at the Emerald Hillside of Z(ilker Park), where you can enjoy all the wonders of Dorothy's trek through Oz in the 59th annual Zilker Summer Musical, directed by J. Robert Moore, with musical direction and choreography by Adam Roberts. Playing the Kansas ingenue who just wants to go home is Hannah Roberts, of Summer Stock Austin's The Addams Family and Into the Woods. July 7-Aug. 12, Thu.-Sun., 8:15pm, at the Zilker Hillside Theater, 2206 William Barton. www.zilker.org

A version of this article appeared in print on May 19, 2017 with the headline: Follow the Yellow Brick Road