In which the young heroine grabs those wild wonderland reins 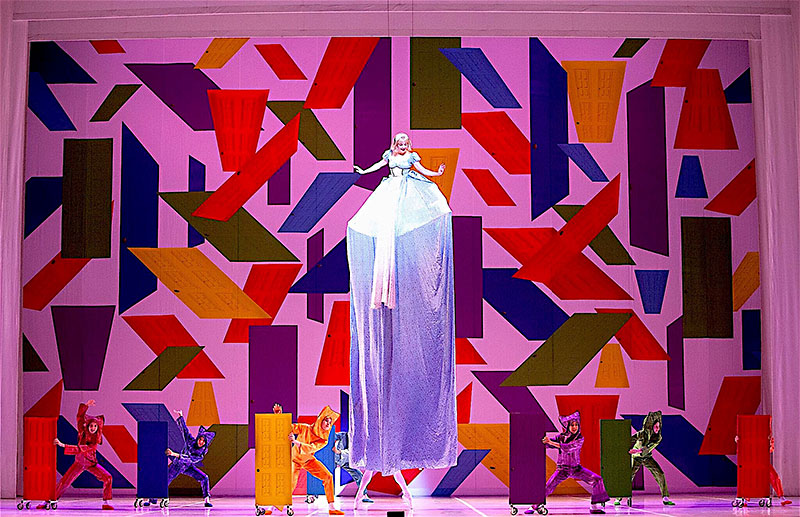 It's clear why the second part of the title of this ballet, choreographed in 2012 by Septime Webre and a new addition to Ballet Austin's repertoire, is in parentheses. Wonderland is colorful and thrilling, but in truth, this adaptation of Lewis Carroll's 1865 book is all about Alice. Early on, the heroine, danced wonderfully by the comic and earnest Jaime Lynn Witts, was gregarious but prim, in her blue dress and white tights and pointe shoes. But as she followed Ian J. Bethany's sprightly White Rabbit deeper into Wonderland, her primness dissolved. She had to stand up for herself, and she weathered disappointment. When creatures she had been playing with snubbed her, her sadness was palpable. But as in any happy childhood, disappointment was short-lived. Come on, gestured the White Rabbit, communicating in the deep, special language of her imagination, and she followed him deeper into the forest.

Webre, who choreographed the work for Washington (D.C.) Ballet during his long tenure as director there, commissioned the voyage of a score from Matthew Pierce, who conducted a streamlined Austin Symphony Orchestra (a string-based ensemble of 14) while also playing first violin. Set within a Nutcracker-like frame, Alice's journey begins in the stark-white parlor of her home (her family members foreshadow the Wonderland characters to come; before Bethany was the White Rabbit, he was the family's butler). Lewis Carroll (danced by Christopher Swaim, who later appears in Wonderland as the Mad Hatter) is a mastermind on par with Herr Drosselmeyer. After the family poses for a photo, he takes Alice boating and hovers over her as she reads her book, as though casting a spell, until she falls asleep. I doubt I'm the only audience member for whom the trope of a quirky (creepy) uncle leading a girl's emotional development is like nails on a chalkboard (since we're modernizing, can we just leave Alice alone with her books and her thoughts already?). But creepazoids aside, this Alice, and especially Witts' Alice, was self-reliant, doing most of the work herself.

Spectacular surprises abound in the episodes that follow, thanks to designers Liz Vandal (concept and costume), Clifton Taylor (lighting), James Kronzer (set), and Eric J. Van Wyk (puppets). In falling down the rabbit hole, Alice flew up into the air, floating high on wires above a tower of books, as objects swirled around her and Tweedle Dee and Tweedle Dum, on a tandem bicycle, sailed by. After eating a tart, Alice grew to maximum height, her dress unfolding yard after yard beneath her as she looked down at "her" legs – a double pair – bourréeing below the hem. (The illusion worked: "How did they do that?" asked my 6-year-old seatmate.) There were roles for children of all sizes – the capable and adorable students of the Ballet Austin Academy – adding depth in delight and scale. A trippy corps of doors was replaced by young doubles, "shrinking," when Alice grew. A full-fledged avian pas de deux (note to gala programmers: Tired of Swan Lake, Act II? Excerpt this!), included a duet between an elegant Eaglet (Oren Porterfield) and a bounding Dodo (Kevin Murdock-Waters), solo variations, a coda, a 12-member flamingo corps, and a gaggle of flamingo chicks flapping around their adult counterparts. Fine dancing and performing all around, not least by a versatile male corps, added a thread of cohesion among the episodes.

By the corrupt trial and near-execution in the second act, before Alice awakened and found herself at home with her book, I could imagine the smudges and snags she might have acquired on her white tights and shoes during her journey, although she never changed costume. After all, she had saved the adorable somersaulting hedgehogs from the Queen of Hearts, a true heartless villain as danced by Aara Krumpe (in the first scene, she was Alice's mother, raging at the help). And then she had encountered the great Jabberwock, a mastery of puppetry with fearsome teeth and shining eyes. Alice herself had slain it. Then, she had flexed her biceps, to the audience's roars.

Dell Hall, Long Center for the Performing Arts
www.balletaustin.org
Sat., May 13, 2pm
A version of this article appeared in print on May 19, 2017 with the headline: A Liddell Knight Music