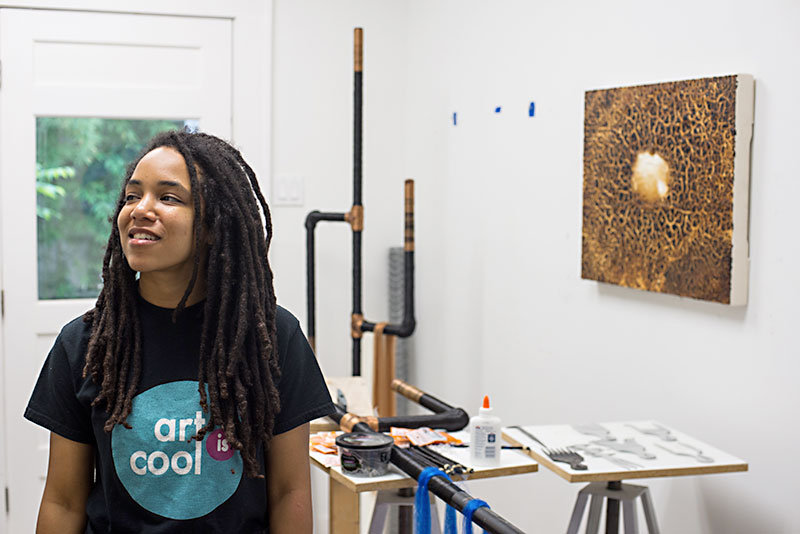 Local artist Christina Coleman has imagined her staffs of braided black hair as figures or trees making a forest deep and rich enough for a person to walk "in the midst of." In order to display the staffs in such a way, she'd have to drill holes in the floor of a gallery; the complicated process has made it so that thus far the forest of staffs hasn't seen the light of day. I told her I like the idea of that forest. I've seen the singular version, a lone black staff leaning against a wall like a lazy figure but ramrod straight, made from braided black hair, dangling from countless places like playful tails, encapsulating figures themselves. The staff is also decorated with plastic balls and barrettes, so that at its crown, Staff #4, for instance, looks like a collection of shining red, white, brown, and yellow gumballs (and other colors besides), giving the staff an organic, messy appearance, like a head, a busy organism packed tight with life. Continuing down the body of the staff are the plastic barrettes, more bright colors, purple, white, green, and in various shapes, some like bows, others spelling out "ABC." The singular staff is strong, charismatic, but all the same, I like the notion of the forest of staffs/figures, silent members of a knowing, hairy clan.

We are talking about black hair here. That cannot be denied. The staff, despite its rigidity, its authority (Coleman points out that the staff can be a status symbol), calls to mind little girls too young to know their own race, to know they even have a race, or that a race will be forced on them – that it has been forced on them already. Before, as Martin Luther King Jr. wrote, the "ominous clouds of inferiority [begin] to form in her little mental sky." "The sculptures," Coleman says, "stem from me thinking back to when I was younger and growing up, and all the materials I use, like these barrettes or these hair accessories that girls use in their hair. Questions about black women's hair culture and equality in terms of texture of hair and blond versus brown hair. It also had to do with thinking about maturing and how getting one's hair straightened is like your rite of passage." She describes being young and having her hair straightened for the first time. It had to be done for a special occasion, but it wasn't a choice she made for herself.

I see some reflection of Coleman's experience in my Mexican-American family. We've had a tradition of taking formal portraits of the kids when they reach the age of 13. In their portraits, my sister and niece have long, flowing, dark brown hair, hair which would eventually be cut short. I see young girls with that long, straight hair all the time, hair that comes to the bottoms of their backs and which will, someday, be cut away to signify an admission to womanhood, a transition, conscious or not, into adult life. Coleman's work signifies a more specific, underacknowledged cultural shift into adulthood that is thoroughly American but less mainstream. This underacknowledged and underappreciated voice is exactly the kind that should be highlighted and celebrated at a time when anything unfamiliar or culturally and politically challenging is deemed accusatory, politically correct, and even dangerous. Even without the razor sharpness of Coleman's work, it would be important, because it tells us things we need to hear. Today. Right now. 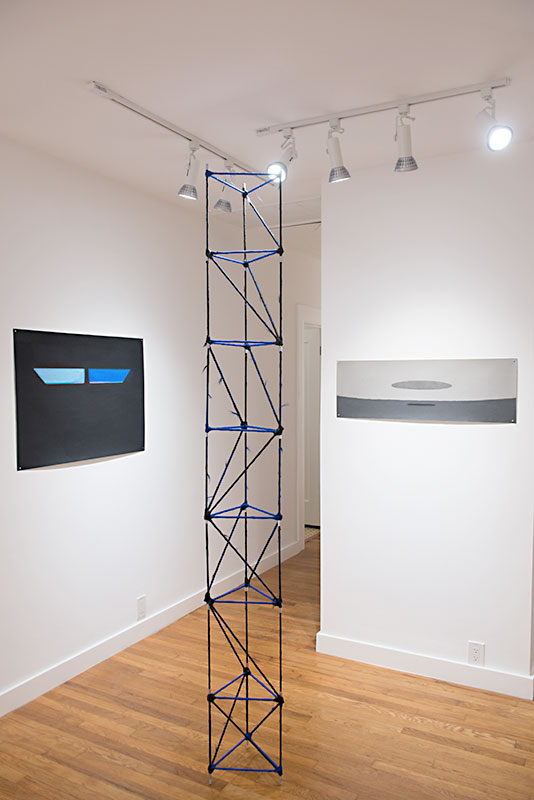 “It became important for me to think about the spaces black people exist in, to make these drawings about the beginning of things,” says Coleman. “To say that we’re in that space, too, and that we’ve been in these things since the creation.”

Coleman, 32, was raised in Los Angeles, attended the art program at the University of California at Los Angeles, and eventually came to Austin to attend the MFA program at the University of Texas. Last summer, she took part in the "One / Sixth" show at de stijl | Podium for Art, the politically conscious gallery where she also works. "One / Sixth" featured the six (later amended to seven) African-American artists who had graduated from the program over the course of its history. Coleman has high praise for the program and found, to her surprise, that it fostered a rich black community. "I didn't go into it thinking, 'Where are my black people?'" she says, but the presence of artists and faculty like Dr. Cherise Smith, Michael Ray Charles, and John Yancey, among others, was invigorating. "Having everyone there and being able to talk with them was pretty enriching." She was also impressed by the caliber of her fellow students, artists she "became really close with and got to know really well. I liked being in that whole atmosphere and going to those lectures and being in the studio late, sleeping there sometimes, that whole lifestyle." She also appreciated that the MFA program included three years of study rather than the usual two, which allowed her to cement relationships within the school and space to develop her style and voice.

It should come as no surprise that the world of contemporary visual arts, at least in the West, has not traditionally been the most welcoming to artists of color or, for that matter, artists who are not straight and male. Coleman, a black woman who identifies as queer, is an outlier in terms of demographics in the visual arts, particularly in Austin, where the shrinking of the African-American population has been a disheartening trend. This makes her work – her skill, the flare of her imagination, the force of her vision – all the more precious. When I ask if she feels any particular responsibility to address those issues, she recalls the panel discussion that accompanied the "One / Sixth" show and how, when the notion of art and social responsibility came up, the artists on the panel were sympathetic but not altogether convinced. For her part, Coleman understands the necessity for art to reflect life, but she demurs from the suggestion that artists should be required to address anything beyond their own interests. "I'm not going to knock an artist who chooses to do that or doesn't want to. We [as artists] have a particular place in society, but we are also self-licensed to live off the grid."

In an earlier interview for the Blanton Museum of Art, Coleman referenced a 1987 essay, "Black Hair/Style Politics," by Kobena Mercer, in which Mercer wrote: "As part of our modes of appearance in the everyday world, the ways we shape and style hair may be seen as both individual expressions of the self and as embodiments of society's norms, conventions and expectations. By taking both aspects into account and focusing on their interaction we find there is a question that arises prior to psychological considerations, namely: why do we pour so much creative energy into our hair?" Mercer is talking about the phenomenon of individuals and the hair on their own heads, but Coleman's strategies for "pouring creative energy into her hair" is on another level. This is notable in one of her more spectacular works, Arch, a sculpture made from thick, shaggy hair that is large enough to walk beneath. It is simple and demanding, a solid, sophisticated shout. Like her staff sculptures, Arch, for better or worse, implies questions of race, but I don't want to pigeonhole it. Arch is a cleverly abstract work, and while it does ask those questions, it also leaves room for questions about structure, gender, beginnings and endings, space, openings, transport, and power.

The scale of Arch seems to echo Coleman's imagined forest of staffs, the one she hasn't been able to make yet. It also suggests the conceptual scale of her latest work, a still-in-progress series of drawings dealing with the Bible's creation story. Coleman, who considers herself a Christian, says she "was drawn to that story because it breaks things down to literally black and white, and it's very graphic the way it's told." The new drawings reflect the starkness of the creation story by working mostly with black and white, but even those basic elements, for Coleman, can refer back to race and identity. "It sounds ridiculous," she says, "but even using the color black is sometimes a way of thinking about a black figure." Coleman continues to work within her experience, but the work itself is open enough, loud enough, that one need not relate specifically on the matter of race in order to access it. All the same, race is there, a fact that is especially relevant as it pertains to Coleman's use of the Bible as source material. "It became important for me to think about the spaces black people exist in, to make these drawings about the beginning of things. To have an association between me as a black person and the beginning of time. To say that we're in that space, too," she explains, "and that we've been in these things since the creation." It is a necessary idea, now more than ever: that the stories we know, the vetted, chaperoned ones we've been raised with, are not lies – not all of them. Instead, they are incomplete, which may, at times, be just as harmful as a lie. To some degree, then, it is up to artists like Coleman to complete those stories, to speak them in their entirety. And it is up to us to listen.

A version of this article appeared in print on May 12, 2017 with the headline: Completing Tales