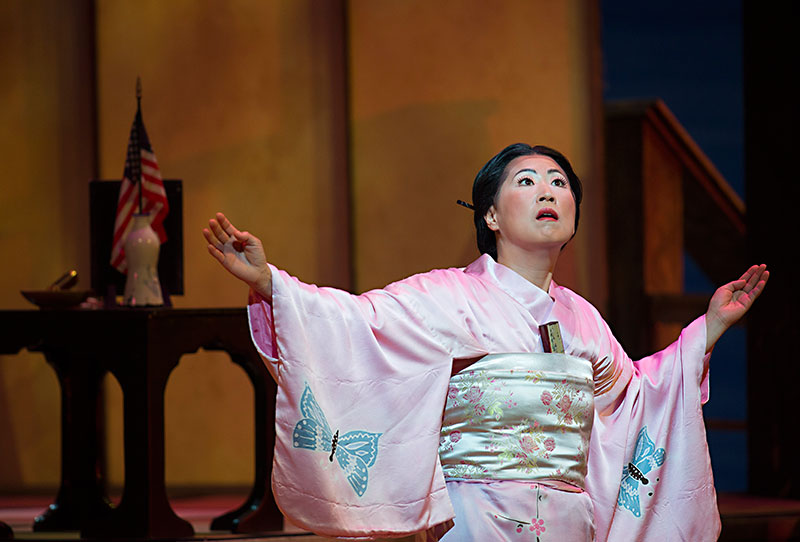 During curtain call in contemporary productions of Madame Butterfly, I'd guess that any poor tenor playing Lt. B.F. Pinkerton usually gets a mix of applause and hisses. That's because he must carry the burden of all that is associated with his role: American imperialism, racial and cultural prejudice, male chauvinism, and the predatory treatment and cruel manipulation of a 15-year-old girl. In the 113 years since Giacomo Puccini penned the opera, societal attitudes have evolved to make the tale of the innocent geisha Cio-Cio-San as painful as it is tragic.

In Austin Opera's staging – the final production of a successful season – Dominick Chenes displays agility in the role of Pinkerton, at first projecting the unapologetic sliminess one expects from the loathsome naval officer, but later effectively conveying the cowardice, guilt, and panic that Pinkerton feels when he returns to Nagasaki with his "real" American wife, Kate, and discovers the son that he fathered with Cio-Cio-San before leaving Japan three years before. Indeed, Chenes is so effective that one is left wondering if Pinkerton will be able to live on after fully realizing his grave sin. Perhaps poor Butterfly is avenged after all?

As the wronged Cio-Cio-San, soprano Yunah Lee sings with a light and silvery timbre, though her voice itself doesn't come off here as sizable or flexible. On opening night, breath-support issues were evident in Lee's tendency to lean back significantly, creating a stiff posture that limited the fluidity in her vocal range and acting – she seemed to lack connection to Chenes in Act I, for example. Act III, however, was her strongest vocally; The moment Butterfly first saw her child – Adi Dhall, positively angelic as Cio-Cio-San's beloved son – Lee lost herself in her role, and the final moments between mother and son were heartbreaking.

As Kate Pinkerton, the woman who agrees to raise the child of her husband and Butterfly, Kathryn Grumley makes the most of her brief time onstage. Her voice possesses a rich, caramel quality that beautifully suits her character's choices as she sings the role with elements of sadness, fear, and remorse.

Providing notable support are Michael Chioldi, an impressive baritone whose rich tone and gorgeous, dark timbre, coupled with his soulful, honest approach to Sharpless, makes his my favorite performance; mezzo-soprano Mika Shigematsu, who conveys a very noble and quiet strength within the character of Suzuki and creates my favorite moments of the production; and local baritone Austin Siebert, whose performance as both the Imperial Commissioner and Prince Yamadori is a surprise standout of the production, showing a warmth in tone that's well-suited to his versatility. The Austin Opera Chorus, rehearsed by Julian Reed, is clear and rich, and each chorus member has a well-defined character. My only criticism is that the iconic humming chorus in Act II – a moment the audience waits for – is a bit too subtle and distanced.

Maestro Richard Buckley, as always, brings his emotionally charged, Verdian-styled approach to his craft, and, aside from the smallest slip in the woodwinds for a brief moment, the orchestra on opening night was flawless, lush, and robust.

John Gunter's set is one of simple elegance. Because there are no scene changes, the passage of time relies solely on the exquisite lighting design of James Sale. Its subtle, gradual shifts with the passing of each day possess a peaceful, mesmerizing quality. Japanese culture is full of reverence to nature, and the carefully timed lighting pays homage to this tradition.

Stage Director Garnett Bruce's detailed style of direction, the time he takes with each and every cast member, and his clear vision for the operas he stages, lead to productions that are smooth and flawless. Even with all the baggage that Madame Butterfly bears in the 21st century, it's still one of Puccini's best-loved works, and Austin Opera delivers a lovely staging of it.

Dell Hall at the Long Center, 701 W. Riverside
www.austinopera.org
Through May 7