The Phantom of the Opera at Bass Concert Hall 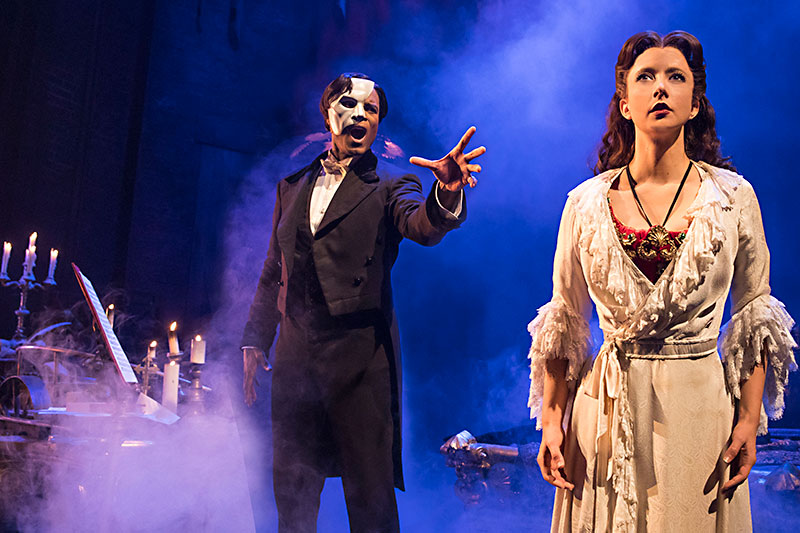 Let's talk about the chandelier crash. Who are we kidding, that's why you see Andrew Lloyd Webber's The Phantom of the Opera. It's the chandelier crash with the big organ number. Music and singing and costumes and everything are great, but if it's not a giant, flaming set-piece plummeting through the air over your head, it's not the reason why Phantom is still going after 30 years.

I'm not even going to apologize for loving a moment that had all the subtlety of a roller coaster, as the massive thing took a vertical drop of about 150 feet over the most expensive seats in the house. I knew it was coming, as did, I would imagine, almost everybody in the house. Still spectacular. Well played, set designer Paul Brown and lighting designer Paule Constable. Also, everybody who works in theatre: Be nice to your stage manager.

The touring version currently in Austin is a restaging of the original, developed by producer Cameron Mackintosh and directed by Laurence Connor. It's a grand production of a musical built on thin source material, but it brings out a compelling story. And an amazing chandelier drop.

The musical may be named after the Phantom (Derrick Davis), but it's Christine the ingenue (Katie Travis) whose transformation drives the story. After a hissy fit from the company diva Carlotta (Trista Moldovan), Christine is plucked from the chorus to play the lead. For the first time, the Phantom steps out of the shadows for her only, bringing her to his underground home where, as an Angel of Music, he reveals her full potential.

In the light of day, however, Christine falls in love with and becomes engaged to Raoul (Jordan Craig), Vicomte de Chagny and patron of the opera. Raoul likes the idea of a masked magician/composer giving private, nighttime voice lessons to his fiancée in the basement about as much as you'd expect. He decides to destroy the Phantom.

Viewing this story in 2017 means seeing it within the context of specific abuse stories gone viral and pop psychology conversations about concepts like agency and narcissism. It's hard to watch this production and root enthusiastically for Team Phantom in the Phantom-Raoul-Christine love triangle. He shows Christine the key to unlocking her potential as a singer, but the price is for her to live under the spell of a sorcerer. Though a genius and abused himself, the Phantom is neither gentle nor compassionate. He issues retribution at any suggestion of disloyalty.

In comparison, Raoul is a grade-A bachelor, but then he decides to use Christine as bait to capture the Phantom. In the most romantic number, he sings, "Let me be your freedom." He sings of guarding and guiding her, not acting as her full and equal partner.

Christine's dilemma is like that of the whole company. One imagines that they might simply run from the opera and the Phantom's threats. But through him, their greatness as artists is realized. It's an intriguing idea to see artistic work positioned as the drug that keeps them coming back for more, even if it's not fully realized in the story.

To describe Christine as only an object of abuse is to deny the power of her final actions, in which she seizes as much authority as is available to her. As Christine, Katie Travis charts the character's growth credibly. The texture in her performance and the thoughtfulness in the staging gives new dimension to the anguish in the duets between her and the Phantom.

The Phantom of the Opera