With this interactive sound installation, it's hard to tell whether it's more about music or not-music 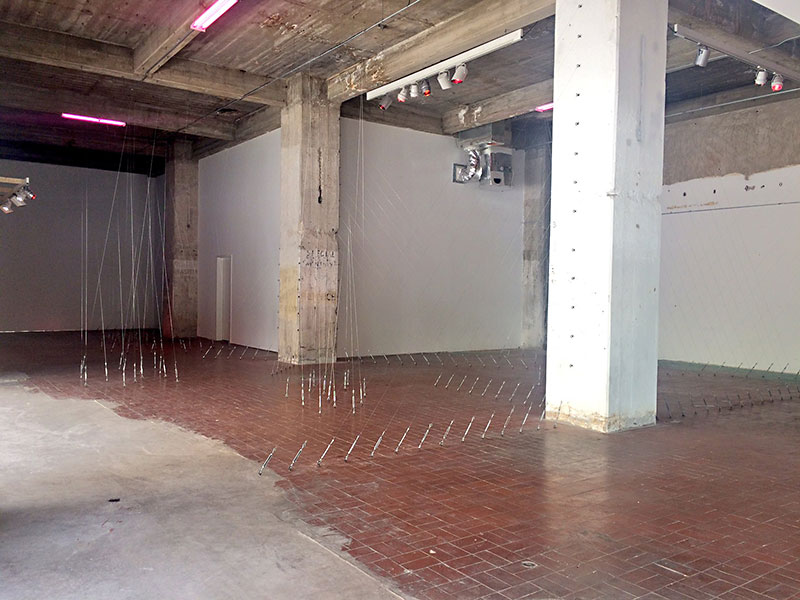 Maria Chávez's "String Room" is a collection of steel piano strings pulled taut from floor to ceiling and neatly arranged into a traversable walkway. The wires gleam at a uniform angle, a forest of leaning lines making a delicate maze. The installation is structurally satisfying and complements the leaking, gutted interior of Co-Lab Projects' DEMO Gallery space.

Viewers are handed white guitar picks and invited to pluck the strings. We are being offered a musical experience, a chance to get inside the instrument and make music on a grand scale, like being allowed to climb inside a massive pipe organ and play Bach's Toccata and Fugue in D minor from the inside out or to bang out Zeppelin's "Dazed and Confused" from inside John Bonham's bass drum. So it was with some anticipation – and some self-consciousness – that I plucked the first of Chávez's strings. I'll deploy a bit of onomatopoeia to replicate the sound I got back: pbpbpbpbpbpbpbpbpb. That's not exact, but you get the idea. The sound I received from the long string I plucked was toneless, sounding only like what it was: a thudding wire.

I plucked at several more strings and received the same result. One of the more compelling details of the installation is the differing length of the wires. Some reach from the floor to the ceiling. Others are only one or two feet from the floor to a nearby wall. I plucked at wires of various lengths, hoping that would make a difference, as one would expect from a real piano. Unfortunately, if there was any variation, I couldn't hear it.

It's incumbent on a viewer to go into any work under the assumption that the artist is in full control, and that idiosyncrasies in the piece are all part of the plan. Looking at work, especially if it is challenging, requires a kind of bottom-up approach, like trying to identify an object with one's eyes closed. With this in mind, I attempted multiple avenues for excusing the concept behind Chávez's piano that doesn't play. Maybe the tone ranges were simply very subtle; maybe being able to play the instrument wasn't as important as simply being inside an object I wasn't supposed to be inside of; maybe real, identifiable tones would be too easy, like an exhibit in a science museum. If I want to play music, I can buy a flute. If I want to think about what music is, then there's "String Room."

But unless a joke is being played on us, why hand out guitar picks? I watched as a woman and a young girl walked through the maze and played at the strings. They seemed befuddled, as was I, and I couldn't help but be embarrassed, as though I were the one who'd raised their expectations.

Chávez's bio notes that "accidents, coincidence, and failures are themes that unite her sound sculptures." It's possible "Piano Room" is intentionally toneless. I'm reminded of John Cage's "4'33"," during which Cage sat at a piano without playing a note for the duration of the piece. The audience eventually understood the game and were either awed by the tribute to the music of not-music or irritated that their time had been wasted. Either way, the work was extreme enough to make its point. If Chávez is attempting something similar, I'd suggest committing one way or another. Either give me music, or give me something that is aggressively not-music. What we seem to have is something in between: a dull, apologetic thrum that forgets to resonate.