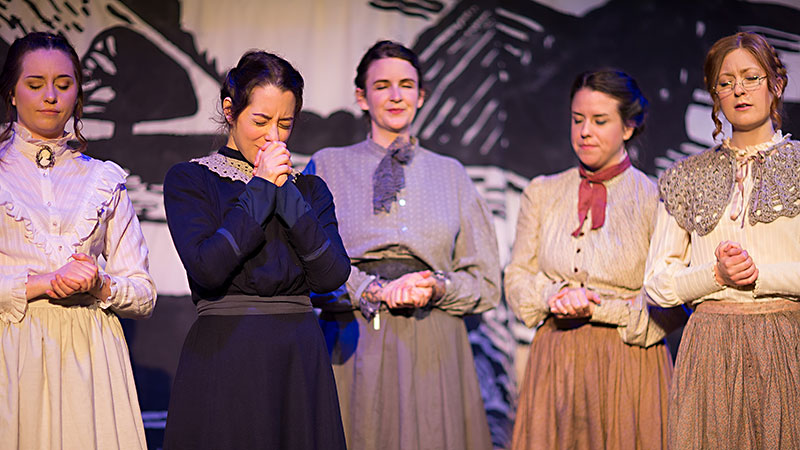 Emma Smith's problems are of biblical proportions. She has helped her husband, Joseph Smith, found and establish the Mormon church, which has come with the lion's share of challenges including but not limited to banishment, taking dictation from God, living in exile, public ridicule, threats, assault, and jail time. No matter the obstacle, Emma has always been planted steadfastly at Joseph's side, her faith tested but never broken. She gives as much as she can, becoming a wellspring of food and medicine and shelter and love to any Latter-day Saint in need. Appointed the Elect Lady by Joseph Smith himself, her reputation for sharing everything she has touches and inspires all who meet her.

But when Emma is asked to share Joseph Smith in plural marriage – a right that he believes is literally God-given – she is faced with a crisis of faith that will test not just her relationship with her husband, but her relationship with God, who has always been the foundation and focus of her entire existence.

American Berserk Theatre's For Time & Eternity focuses on the life of Emma Smith, the founding mother of Mormonism. The cast-devised piece began its life in the brain of director Rob Yoho, who discovered Emma's story and was "immediately awestruck" by how obscure her history seemed to be. Yoho took the idea to his cohorts at American Berserk, and they began researching and improvising. Curtis Luciani took the helm as playwright and, with Yoho, shaped the piece as a whole without extinguishing the collaborative nature of the work. The result is solid enough to see and enjoy immensely; however, some additional workshopping could take this production from very good to freakin' awesome. All the basic components of a good play are present and accounted for. Some of note include: an in-sync ensemble, great text, Ammon Taylor's simple but lovely piano, score and on-point period costumes.

Kaci Beeler turns in a solid performance as the Elect Lady Emma Smith, walking a tight emotional line between blessed and cursed. Jon Bolden makes a fervently non-reluctant leader of Joseph Smith, and the ensemble cast conjures a village full of memorable characters as they shine a light on Emma's hidden history. At two and a half hours plus a 15-minute intermission, the evening does run a bit long, but ultimately the show is more than worth it. Emma Smith's story is a meditation on the effects of giving absolutely everything up, the true nature of God's love, the sanctity of marriage, and the question: How can something be sacred when nothing feels sacred?

One last note: When religion is the subject in a modern theatre setting, there is all too often an attempt to dismiss or discredit people of faith. For Time & Eternity depicts a controversial historical happening in the early years of the Mormon church without bringing into question the validity of the Mormon faith. There's a lot of grace and respect in that. May we all learn to take a more mindful path when discussing the darker side of religious histories.

Howson Hall, First Unitarian Universalist Church, 4700 Grover
www.americanberserktheatre.com
Through April 22
Running time: 2 hr., 45 min.
A version of this article appeared in print on April 21, 2017 with the headline: Blessed or Cursed 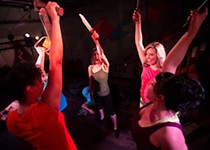 American Berserk Theatre's Killer Girls
When the killer girls of this timely satire strike back at abusive bros, revenge is sweet, smart, and hilarious