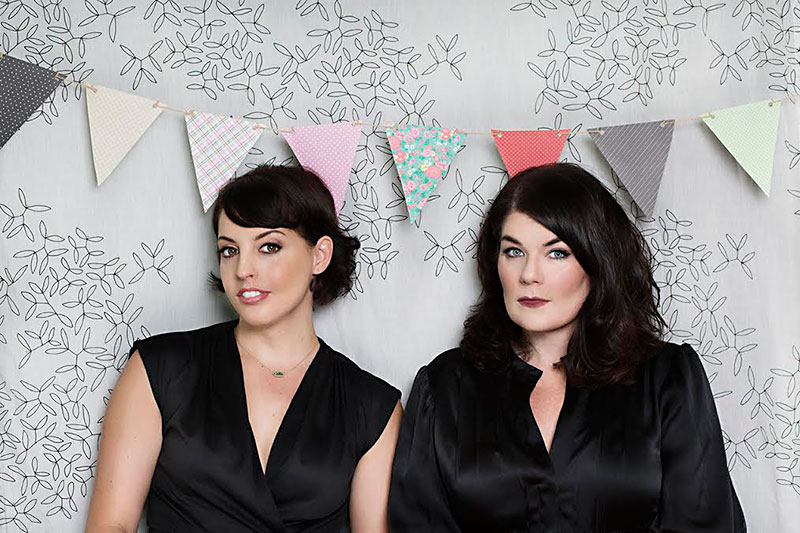 It takes several ingredients to make a murderino. The most obvious and universal: You listen to the current No. 2 comedy podcast on iTunes, My Favorite Murder with Karen Kilgariff and Georgia Hardstark. Well, you don't just listen, you fixate on it. Before, you were listening to Serial or watching Cold Case Files or drifting to BookPeople's True Crime section like there was a homing beacon in it. Life was pretty good. But there was always that little hesitation before you brought up your special interest in public: Would you come across as creepy?

The good news: A murderino is never creepy. Funny, irreverent, a loud gasper, a strident advocate for good mental health practices, a volunteer mourner for forgotten and maligned murder victims – a murderino may be all these things, but never creepy. Just over a year old, My Favorite Murder (MFM) has built an international community where you can nerd out about the macabre away from judgmental eyes.

I was introduced via a co-worker who clocked me reading Beverly Lowry's Who Killed These Girls?, about the Yogurt Shop Murders, on my first week at a new job. It was the beginning of a beautiful friendship, and listing myself among the ranks of murderinos felt like the natural culmination of my abiding affection for Nancy Drew, my stalwart viewership of Law & Order, and that one summer vacation I spent surreptitiously reading a way-too-scary book about the identity of Jack the Ripper.

Life on this side's pretty great. And as Kilgariff and Hardstark are opening the 2017 Moontower Comedy & Oddity Festival with two MFM live shows at the Paramount Theatre, there's no better time to join the murderino throng. Just follow these steps.

1) My Favorite Episode You Share with Your Mom To Get Her Hooked: EP. 12 – "Our Bodies Our Twelves"

Ah, ye olde days when Karen and Georgia talked about the possibility of merchandising and live shows as if it were an attractive pipe dream they might realize in two to five years (instead of things they would totally have in only a few months). My Favorite Murder's one barrier to entry is the opening banter – it can take 5 to 20 minutes to get to the bona fide murder content, and Karen and Georgia's familiar tone, while endearing to fans, can be mystifying to someone out of the loop, re: established catchphrases ("Fuck politeness," "You're in a cult; call your dad," etc.) and other minutiae.

"Our Bodies Our Twelves" makes an ideal introduction because it's early enough that there's not a high burden of knowledge of previous episodes, but far enough along that they're really finding their groove. (And it's their first episode with fancy microphone covers, so the sound quality is unprecedentedly nice!) There's a getting-to-know-you layer, too, as Karen and Georgia each share the story of the murder that first hooked them on true crime: a divorced father's attempt to immolate his son and Diane Downs' attack on her own three children. There's signature banter, signature compassion, signature frank discussion of mental health, and their response to a listener letter at the end is a fine example of their willingness to learn and adapt language to be sure they aren't unkind or alienating to their listeners. Do note some particularly salty language in this episode before queuing it up on your mom's phone, but know that it's deployed in a fit of righteous anger over horrific parental abuse.

A fair amount has been said on the internet about the unique ways in which women fixate on and process true crime stories. While men overall are more likely to be murdered, it's overwhelmingly women who die in domestic homicides, are victims of sex-related crimes, and are targets of serial killers. So a certain amount of survival instinct is being honed as you go down a Wikipedia rabbit hole about the Night Stalker: You share in the knowledge that that could have been you thinking you were safe in your bed when a man busted in, you acknowledge the jolt of fear you got walking through the parking garage alone after drinks with co-workers went later than expected, and you do upkeep on the mental list of Ways You Will Stay Sexy and Not Get Murdered.

The moment you start to get worn down by the unending list of kind, strong, innocent women whose lives were unfairly stolen from them? It's time to download "What About Mimi?" At the 44-minute mark, Karen begins to spin the mind-boggling survival tale of Jennifer Morey, who fought off a would-be rapist-murderer and barricaded herself in her bathroom so he couldn't finish the job. It's the Platonic ideal of a true crime story, with copious Georgia-gasp-inducing twists that I won't spoil here and a happy ending that gives you the courage to fight another day.

3) My Favorite Ripped From The Headlines: EP. 48 – "An Albert Fish Production"

As noted, my appetite for murder comes from a steady adolescent diet of Law & Order reruns (OG, not SVU; fight me about it later), and Executive Producer Dick Wolf loves nothing more than turning a crime you read about in the paper yesterday into a fictionalized crime Jack McCoy can prosecute today. Hence my excitement when a currently unfolding case made it to the podcast – that of Sherri Papini's peculiar kidnapping and release. I first caught wind of the story on MFM's closed Facebook group (123,426 strong and growing – any listener can request to join). The local story of a Redding, Calif., mom's abduction and reappearance 22 days later had become a national headline when her husband gave post-reconciliation interviews to 20/20 and Good Morning America. Not long after murderinos began analyzing Keith Papini's interview demeanor on the Facebook page, Karen made it her case of the week in "An Albert Fish Production." The segment (starting at the 57-minute mark) is MFM in all its shining feminist glory – Karen repeatedly makes it clear that they don't take the notion of questioning a victim's story lightly and her reporting reflects that. There is a lot of A+ theorizing on the truth of the matter from both Karen and Georgia, and my fingers remain crossed that they'll update us when more information becomes public.

While I never have the gumption to straight up skip listening to live show episodes, they typically inspire huge cases of FOMO: The sound quality is lower, there are visual jokes that don't translate over airwaves, and the audience screaming adds a solid 15 minutes to the run time. This is not to say that all of the above doesn't happen in "Live at the Neptune," but oh boy, does the content make it worth it. Georgia's retelling of punk singer Mia Zapata's killing has all the heart and soul that keep MFM from feeling exploitative, and while Karen's lengthy recounting of Ted Bundy's murder career hardly contains shocking revelations, the disdain heaped on him, the compassion extended to his victims, and the refusal to get gross about the details of the murders add up to a radical power shift – what may be the most terrifying episode ends up one of the most reassuring.

5) My Favorite Texas Shout-out As I Wait For A Yogurt Shop Episode: Minisode 6

The minisodes are a new invention, born of the influx of listener letters sharing stories of real murders from their hometowns. Instead of Karen and Georgia each telling a tale they've researched themselves, minisodes have the hosts reading some of their favorite submissions. I'm waiting faithfully for Karen and Georgia to tackle the Yogurt Shop Murders (which they have mentioned an interest in and I suspect they might cover in one of the Moontower shows) and the Servant Girl Annihilator, but they have featured plenty of Texas do-no-gooders.

Minisode 6 covers the 1946 Texarkana Moonlight Murders, the unsolved killing spree that inspired virtually every murderer-on-Lovers'-Lane urban legend in the U.S. Murderino Michael's email is loaded with "y'all"s and tons of great detail about the killer, only known as the Phantom Slayer, and Karen and Georgia rate it as one of the best letters they've ever received. As an episode, it's short and sweet, and inspired me to do more internet sleuthing (the best result of any MFM episode).