The UT alumnus left Austin to be in "the room where it happens": in Hamilton on Broadway J. Quinton Johnson at the SXSW 2016 premiere of Everybody Wants Some!! (Photo by John Anderson)

No matter how many high school drama students hit him up for selfies at the Long Center on March 7 (and as the kids present numbered in the triple digits, there were plenty), J. Quinton Johnson happily obliged. Never mind the hour (the crack of dawn). Never mind the flight he had to catch to get him back to New York for the 7pm curtain of a Broadway show – not one he'd be seeing but one he was in – Johnson treated each photo request like it was the first and those starstruck young thespians like he was one of them and not Mr. Broadway.

And he truly was one of them until quite recently. A few months ago, the 22-year-old was just one more Austin actor hustling whatever roles he could, whether they were mainstage productions for adults (All the Way at Zach Theatre, Guys and Dolls at Lakeway's TexARTS) or daytime shows for kids (Zach's Winnie the Pooh). He'd endured the grind of university student life (UT's Department of Theatre & Dance, where he was Benny in In the Heights) and the swelter of the Zilker Summer Musical (playing Will Parker in Oklahoma!).

But Johnson also landed some very high-profile gigs: the AMC series The Son, adapted from the novel by UT Michener Center for Writers alum Philipp Meyer and starring Pierce Brosnan; ABC's musical reinvention of Dirty Dancing; and Richard Linklater's ensemble comedy Everybody Wants Some!!, which led Linklater to cast Johnson in Last Flag Flying, opposite Laurence Fishburne, Bryan Cranston, and Steve Carell. And then there was this little stage musical called Hamilton. Johnson was hired to succeed Okieriete Onaodowan in the double role of Hercules Mulligan/James Madison. He began rehearsing the show in December and officially debuted on Jan. 6, 2017.

As you can imagine, joining such a phenomenally popular show propelled Johnson to a new level of attention, which is why when he made a quick return visit to Austin just to announce the nominations for the 2017 Greater Austin High School Musical Theatre Awards, Johnson was greeted as a star. But he's still adjusting to the limelight, as he told the Chronicle when we asked about his first months in Hamilton.

Austin Chronicle: What do you remember about your first performance in Hamilton?

J. Quinton Johnson: Nothing. [Laughs] Absolutely nothing. Because the show is so detailed – it's way more detailed than I think people realize. You stand here. You do this here. You catch this. You talk to this person. You go off and go up these steps in this amount of counts. So much of what you do is part of the direction of the show. So that first show, you are adding the realness of other people and their choices, living in real time with them but also trying to remember everything that you have to do and when you have to do it. So by the time the show's over, you're just [dazed expression on his face] "What happened?" And then the rush of the crowd. There's so much happening that your brain doesn't retain all of that information over three hours.

AC: Was there a point in a subsequent performance where Hamilton began to feel like other shows that you've done?

JQJ: Jordan Fisher, who is my roommate in Dressing Room 9, he went into the show maybe a month or so before I did. So I went into our dressing room the first night, and he was like, "Man, you're gonna settle into the show in, like, three performances." I did not settle into that show for a month. It took me four weeks of doing that show to feel comfortable like other shows that I'd done. 'Cause you don't have the formal rehearsal process. So the first month of shows is that; the relationships you build with the cast are essentially what you would do in a rehearsal setting. But you have to do it onstage in front of 1,300 people every night.

AC: So your dressing room is just you and one other guy?

JQJ: Just me and one other gentleman, yeah. The Laurens/Philip. Whoever plays John Laurens and Philip Hamilton shares the dressing room with Hercules Mulligan and James Madison.

AC: Did he help you acclimate to the show?

JQJ: He did help me those first weeks, with things like tipping your dresser. He always had humidifiers on in the room, so that helped just to be able to open up. It's nice to have a dressing room of two people, especially in a show like Hamilton, because someone is always the vet, right? Someone is always there when a new person comes in. And they leave and that person's the vet when the new person comes in. Jordan just left, so I'll be able to help the new Laurens/Philip with things Jordan passed to me that Oak [Okieriete Onaodowan], the original Hercules, passed to Jordan, 'cause he was the vet in the room when Jordan came in. It's a nice little passing-off in Dressing Room 9 at the Richard Rodgers Theatre.

AC: Are there any parts of the show that are more special to you than others?

JQJ: The response we get throughout the entire run of "Yorktown" continues to grow and grow and grow. 'Cause "Yorktown" has the [line,] "Immigrants, we get the job done." With everything that's happening in our social and political climate, the intolerance toward people of different creeds and backgrounds, every night you're coming in to a show that celebrates that and celebrates that in such a pointed, overt way, so the response to that just continues to grow. And I get a nice response for Hercules Mulligan every once in a while after the "Yorktown" rap. There's kind of a breath moment after the huge confluence of choreography where the audience always feels compelled to share applause. Then at the end of the number there's an uproar again because we've won the Revolution, so you really feel like you've taken that audience from America before with no odds to win to "We did it!" Yeah, "Yorktown" is a special one, for sure.

AC: So what's it like receiving that kind of phenomenal response onstage?

JQJ: Onstage, your job is to tell the story. So you don't fall in love with it, because on any given night, you may not get it. You just try to adhere and hold true to the story as best you can eight times a week. What it is on the inside is not always what it is on the outside. You just try to retain your focus and drill in on what you have to do, which is the show for three hours. It's nothing more than that when you step onstage. The reception – that's beyond us, you know. The people who want autographs afterward or when people applaud in the middle of songs or there's a standing ovation at the end of the night, we can't control or expect that. All we can do is sing and dance for three hours.

AC: What in the experience is not like what you'd done in Austin?

With Austin, this community is involved with musical theatre and the arts, but that reach doesn't go to Florida or California, necessarily. With Hamilton, it does. There are people in California who know this show backwards and forwards. And now they'll know it even more, because we have a production going to the West Coast. So I think the reach and the scope are the only things that are different, because the work is the exact same. There's no difference there.

AC: How long did it take you to perfect your selfie smile?

JQJ: [Laughs] After I got my braces off, I would spend time smiling in the mirror to see what that feels like, so I've gotten a formula down to that. But when you're taking so many pictures a night, you're trying to give different faces and just be there in the moment, having fun with it, being a kid at that point. There's no practice to that. I practice the thing onstage, but everything offstage is just fun.

AC: Is there anything you did in Austin that you feel prepared you for Broadway – what lessons did you learn, what connections did you make that have helped you as you stepped into "the room where it happens"?

Physically, the thing that prepared me the most – which I would scream from the rooftops to younger performers, and I'm 22, I'm fresh out of the college community – is leaning into that. "I'm doing college, I'm doing shows, I'm trying to work, I'm trying to figure out all these things," is going to prep you so much if you do the tour thing, if you do Broadway, because you're used to juggling plates, and that's what that is. It's easy to be like, "When I don't have to do that essay and do the show, or when I don't have to go to classes, it's gonna be easier." Don't ask for it to be easier, because at the top level, it's not easy.

When you feel like you're not doing the thing you want to do and you're not at the level you want to be at, it's tough. I get it. But when you get to the place where you're doing the film and you wake up at 5 o'clock in the morning and you shoot for 12 hours and maybe your team has set up interviews, so you finish a 12-hour day and then have to go to your hotel room and talk to people and then get up and do it the next day, you're gonna value that your system already knows that hustle from college or having to do a million different things – work a job and scrap for every show you can get – you are gonna love that you have this discipline. Because without that discipline, you can't do this. You can't do an eight-show [week]. If you are lucky enough to have all of those things to juggle, man, you are gonna be so much more equipped to juggle the elements of real life: taxes, housing, developing shows if you ever want to write shows. Having the discipline of being in a community like Austin and juggling a million plates only aids. 'Cause then you get there, and you're like, "I got this. This isn't stressful. I'm already acclimated. I'm already at the level at which I can handle all these things." It serves you so, so much.

A version of this article appeared in print on April 7, 2017 with the headline: The World Is Watching 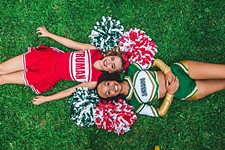