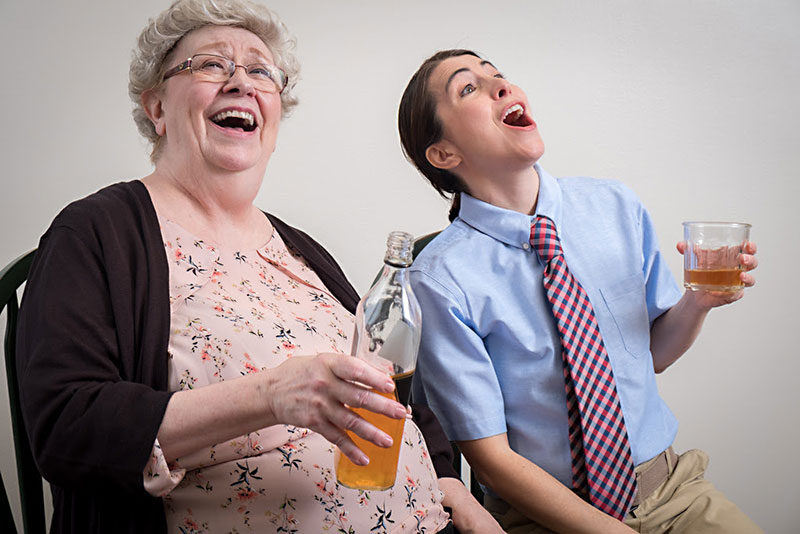 What's the difference between "Good morning" and "Good day"? How many forks do you really need in a place setting? Why should a gentleman hold a door for a lady? Such are the concerns of the students of Mrs. Mannerly's school for manners in Steubenville, Ohio, in 1967.

This is the class to which young Jeffrey Hatcher (the playwright, played in this Different Stages production by Suzanne Balling) is sent after an outrageous outburst in church one Sunday. Early on in this semi-autobiographical story, Jeffrey tells his older cousins that he is enrolled in Mrs. Mannerly's class, and they ask only what that has to do with Vietnam.

That's as edgy as it gets in this sweet story about a young boy and his teacher (Jennifer Underwood). Jeffrey, who has never been first at anything, decides that of everyone in his social set in Steubenville, he will be the first student ever to earn a perfect mark on the final test, administered in the presence of the domineering Daughters of the American Revolution. To achieve this distinction will require not only manners but cunning as well. Jeffrey sideswipes his four fellow classmates one at a time, eliminating his competition. He makes an ally of Mrs. Mannerly herself, who seems to see in Jeffrey a kindred spirit – but Jeffrey is also out to uncover Mrs. Mannerly's secret past. As a 9-year-old boy in short pants, he plugs her with Scotch and works secret deals with the local high school drama teacher to discover what she's hiding.

If there's a message to the play Mrs. Mannerly, it's that manners are nothing more or less than an act we put on, a means to an end. Jeffrey and Mrs. Mannerly and all the rest of the characters (Balling plays several) assume the practice of etiquette simply to get by.

Having lived in Ohio, I'd say the play is very much a product of its setting, the playwright's hometown. It's modest in nearly every way: the small cast, the single set (here the work of Anne Marie Gordon), the measured pacing. The narrative only reaches so far. Even the limited cursing is mild, as things go. As much as Mrs. Mannerly herself seems a relic, the play is a gentle, humorous offering of a story. It doesn't shake the Earth, but it seems to satisfy the playwright's desire to shape the ghosts of his own past into something well-formed and entertaining.

Under the direction of Karen Jambon, the two actors engage well with one another. The production is staged in the Santa Cruz Center for Culture, a tiny space even by the standards of Austin, where black box theatres dominate – and yet the performances are pitched as if to a house of a thousand. Gestures are frequently over-pitched, occasionally veering on cartoonish.

Balling's many characters are crisp in their definition, and Underwood becomes more endearing as the play goes on. Perhaps as the run continues, the actors will bring their energies down to the intimate levels that a small space like the Santa Cruz Center serves, and that a mild script like Mrs. Mannerly fosters.

After all, it would only be polite.

Santa Cruz Center for Culture, 1805 E. Seventh
www.main.org/diffstages
Through April 15
Running time: 1 hr., 30 min.
A version of this article appeared in print on April 7, 2017 with the headline: Mild Mannerly