In this collection of jazzy geometric mixed-media works and sculptures, the artist conjures wild characters in a self-contained universe 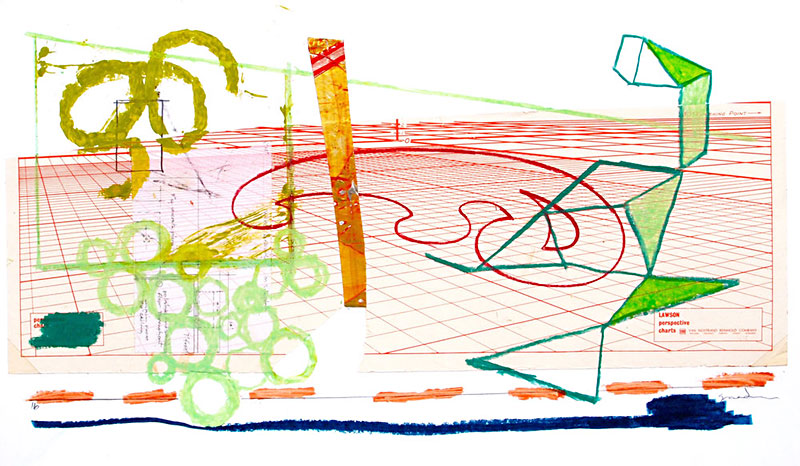 Larry Graeber's Wire and Tube is a character, like something out of a Dr. Seuss book or a Joan Miró painting, a surreal figure jouncing and sliding across a landscape of forms and lines where nothing, not the ground or the sky, not even the air, is dependable. The sculpture is small, a wood base painted white with a wood panel, white on one side, red on the other, standing upright on top. Wires protrude from the upright panel and twine around a tube, also painted white. The wires snake and wave between the tube and the wood base like sonic frequencies caught on radar or the strings from a bouquet of unruly balloons.

Wire and Tube is static, but I can't help describing it as a living thing, in part because of how well it interacts with Graeber's nearby frenetic works on paper. Graeber has concocted a series of deceptively simple 2-D mixed media pieces that, despite their relative uniformity and (paradoxically) accompanying wildness, seem to run the gamut of allusion from portrait to landscape to still life. I say that, but another viewer, including the artist, may think I'm nuts, that these jazzy collections of lines, grids, and patterns allude to nothing but themselves. But when I review the piece labeled January #4 (the works on paper are titled for the day they were made), a selection of jittery, interconnected black lines and bright, geometric figures, I perceive a still life's closeness and intimacy, like a plate of fruit on a table. Meanwhile, February #4, featuring a red grid that disappears into the horizon, and smeared algae and pale green monstrosities like oozing, lurking freaks, has all the spatial scope of a future-world landscape. It could be a Hudson River School mountain scene, but replace the mountains and trees with unidentifiable, unnameable creatures and replace the artist's signature with the words "LAWSON perspective charts" – apparently the makers of the red grid paper Graeber has selected.

And on to January #5, a mangled rectangle of blue squares and jagged crimson angles that calls to mind a jumbling tractor or even a trippy picnic table. On to February #7, a mass of gold, silver, and red surrounded by white with a messy pink bar beneath, like a screaming train or a speed skater in full motion. Each 2-D piece is an uncanny display of compositional wonder, balanced and refined without losing its energy, the thing that keeps it moving and in sync with Graeber's sculptures. The sculptures, like Wire and Tube, share the same quality that make them both difficult to grasp and eminently present, like mysterious, boisterous, charismatic beings.

The star of the show might be Lean. A wood base painted gray holds a yellow beam and a collection of thin, dark posts that reach almost to the ceiling of the gallery. The piece resembles a tall, deconstructed bird or a very thin man bent at the waist. The bright yellow pops against the darkness of the posts and the grayness of the base, illuminating the form with the same vitality found in the 2-D pieces, which makes Lean seem like it could loom easily in any of the paper works. Altogether, Graeber has conjured a self-contained universe, like a novelist inventing a world for storytelling. Graeber's characters are still but active; comic but dignified; generic but honed to specificity; and detailed enough to burst forth. They have personality enough to speak for themselves. It's an enigmatic, curious, combustible mix. A giddy achievement in so small a space. 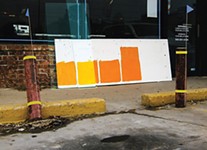 "Tammie Rubin: Before I Knew You, I Missed You"
Rubin's porcelain figures are both sympathetic and menacing, referencing the African-American experience through cones resembling KKK hoods 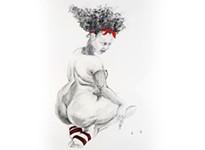