A Guide to Austin Stand-Up: Comics

The stand-up people behind the city’s comedy scene 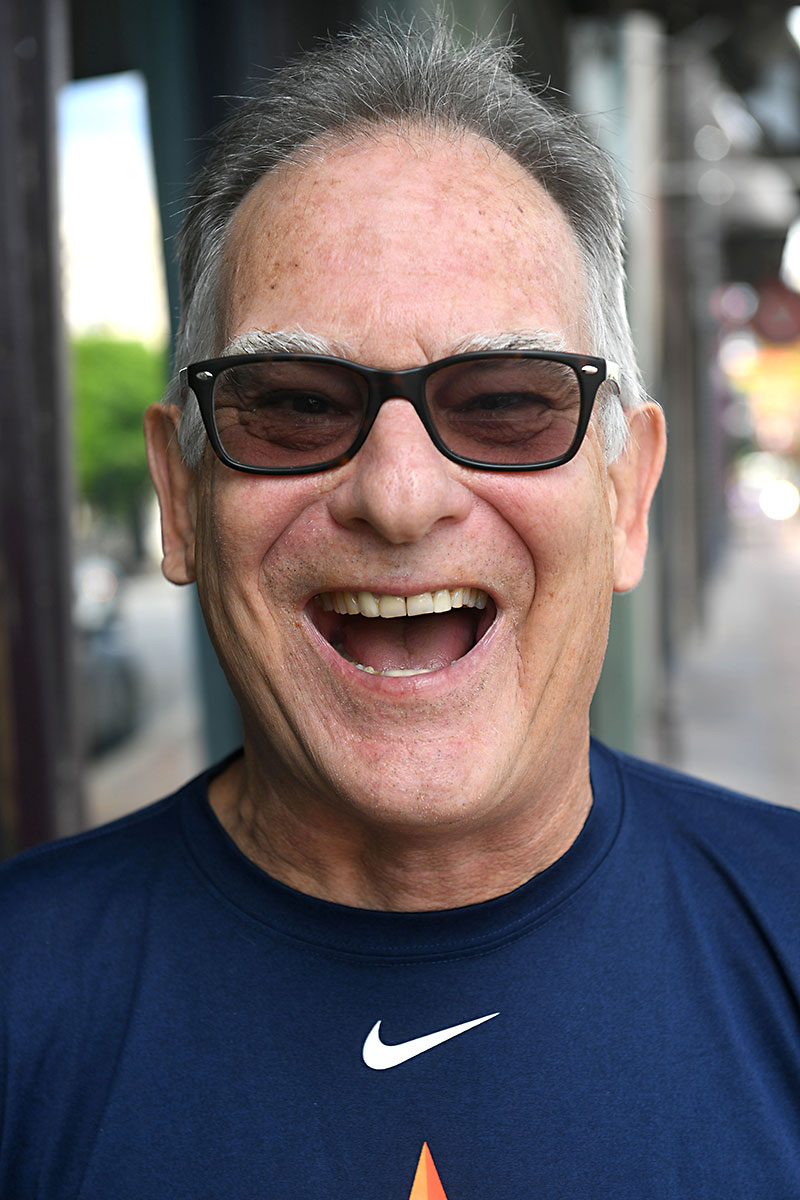 The original Funniest Person in Austin (as in the contest's first winner in 1986), this Houston native moved to River City in 1970 and is in his fifth decade of blessing it with his music (he's a founding member of absurdist band Uranium Savages), art (he co-created the Austintatious mural on the Drag, served in the Armadillo World Headquarters' Armadillo Art Squad, and painted the massive mural at the Westgate Central Market), and wit. Wit? Years and years with Esther's Follies, holding court at the Velveeta Room (named for Awn's Ronnie Velveeta character) and brightening comedy mics all over town. "One high point," says the wry Renaissance man, "was appearing with Esther's Follies and Ann Richards at the Erwin Center, at Ann's inauguration as governor. I was a 10-foot-tall can of hair spray." – Wayne Alan Brenner The funniest wheel of the early morning tricycle of KLBJ-FM's The Dudley & Bob With Matt Show is straight outta Brownsville (with a high school layover in Houston) and is old enough that he "watched The Golden Girls on network television." And why is Austin home for this seldom-touring stand-up man? "I graduated UT, eventually moved to L.A.," he says. "Came back to work on a film. Tried to leave, but accidentally got on MoPac. That was 17 years ago. I'm not even a resident, I'm still just stuck in some construction zone." Besides the radio gig, Bearden's best known for the long-running Tuesday night PUNCH showcase at Cap City Comedy Club, an event so popular that (nota bene) it sells out almost as soon as it's scheduled. – W.A.B.

Before winning the 2016 Funniest Person in Austin title, Lashonda Lester created, produced, and starred in Weird! True Hollywood Tales, a dark-comedy, biography series that focused on 20th-century celebrities who died tragically or mysteriously. Its five-season run at Salvage Vanguard Theater ended when SVT lost its lease last year, but at the same time, her stand-up career caught fire. Lester took the FPIA crown, recorded her first album with Minneapolis-based Stand Up! Records, and landed a deal for her first half-hour special on Comedy Central's Stand-Up Presents, set for this fall. Her friendly but blunt observational humor strikes a unique balance, feeling at once like much-needed social commentary and a good-natured jab. – Ashley Moreno 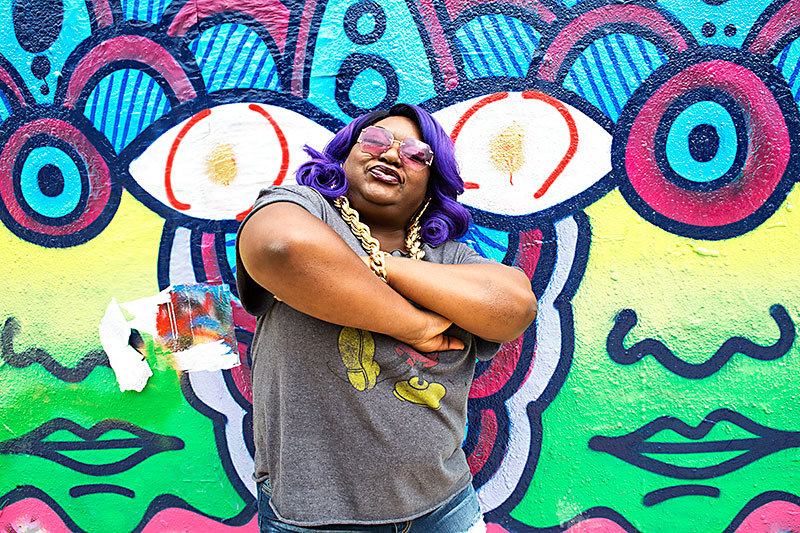 While he's technically an East Coast transplant, Bryan Gutmann is as much a part of the Austin comedy scene as any letter-of-the-law hometown hero. He's been performing his good-natured, observational stand-up for over a decade as a staple of comedy venues and showcases around town. In 2007, he was, officially, the Funniest Person in Austin, and in 2015, he recorded his first solo album, That's How Scientists Talk, on local label Sure Thing. He's currently focused on writing new material with a more personal angle, which he hopes to take on tour soon. In the meantime, the best place to catch him is at ColdTowne Theater Monday nights, and check out his recent interview on Comedy Wham!'s podcast. – A.M. When describing Avery Moore's place in Austin's comedy landscape, the same adjectives continuously surface: "mainstay," "favorite," "regular." But these compliments hardly capture Moore's ubiquity and influence on the local scene since the San Antonio native emerged here. After becoming the host of the Velveeta Room's "no womps given" Sad Trombone Showcase in 2014, Moore began to show up everywhere around town, her motormouthed "Aubrey Plaza on psychedelics" persona commanding each stage she was on. She's parlayed her infectiously giggly and distractedly waggish style into opening gigs for legends like Louie Anderson, and with major roles in the Funniest Person in Austin doc Funniest and Lex Lybrand's The Trolls, this inimitable comic's path to national recognition looks to be fully paved. Moore headlines at the Velv Comedy Lounge, Fri., March 31, 9 & 11pm. – Sean L. Malin It's hard to think of an Austin comic more immediately endearing than Martha Kelly. Her understated, kind, and self-deprecating humor helped build the local comedy scene. Long-timers might recall her performances at Cap City Comedy Club, her guest appearances with the bad-movie mockers of Master Pancake, or her Funniest Person in Austin win in 2000. But Kelly now boasts a growing list of national accolades, such as her co-starring role (as Martha Brooks) in FX's Baskets with Zach Galifianakis and Louie Anderson, and her 2016 solo stand-up special on Comedy Central's The Half Hour. While she's been known to bounce between Austin and L.A., she once again calls the ATX home and plans on booking more local gigs. – A.M. For most of her life, this Laredo native has been onstage with other people: getting a theatre degree from Texas State University, performing with sketch sensations Latino Comedy Project, and doing improv with the New Movement. But going solo for stand-up has really agreed with Vanessa Gonzalez. After just three years at the mic, the 31-year-old comedian took third place in last year's Funniest Person in Austin contest and was recently a featured opener – "It was so fun!" – for Anthony Jeselnik at Cap City. – W.A.B.

Chris Cubas' comedy often broaches some pressing social and political issues − like police brutality, economic inequality, racism, and, as Cubas' current Twitter name "Tronald Dump" suggests, the general dumpiness of our 45th president. And yet, somehow, his sets always feel friendly. In addition to holding a forever spot in the heart of Austin comedy, he has won the internet on @midnight With Chris Hardwick, is a regular on Doug Benson's Doug Loves Movies podcast, and has his own pop-culture podcast, Canceled, in which he and guest comedians talk about TV shows canceled within a season. Last fall, Cubas released his comedic documentary, Chris Gets Money, on Fusion. In it, he spends one month and $30,000 learning how the 1% lives. – A.M. In just a few years, Christina Parrish has emerged as one of Austin's most compelling stand-ups. Her power comes from her ability to bait social justice warriors into angrily amused submission by invoking – and decimating – taboos. Consider the tag for her upcoming Austin-shot indie Call Me Brother: "Christina Parrish writes and stars in this dark romantic comedy that will make you kinda into incest." Like Amy Schumer, this bawdy, gifted comedian seems completely unafraid to expose herself onstage; and also like Schumer, she seems destined for the big time – which, based on the web series of her devising (including 2017's upcoming The Chip Show) and her juicy role in SXSW selection The Honor Farm, may not be far away. – S.L.M. Don't fear the guitar. Granted, for many a stand-up, the presence of that instrument is tantamount to a neon sign flashing "hack." But not for JR Brow, a career comic still busy 40 weeks a year 25 years after his Funniest Person in Austin contest win. That's because: a) his musical schtick, far from a crutch, is truly funny because he gets music, and b) it's just part of the package; Brow is also genial, smart, and knows how to craft a joke so it doesn't sound like one. Brow makes it sound like a yarn that your funniest bud unspooled over beers in the backyard. It's what's earned him gigs opening for Steven Wright and Bill Hicks, and on The Late Late Show With Craig Ferguson and Live at Gotham. – R.F. Ralphie Hardesty says he often hears from straight guys after a set, "Hey man, I'm not gay, but you're really funny." As the Chicago transplant is quick to note onstage, "That is not how being gay works." But the clumsy compliment speaks to both Hardesty's skills at stand-up and his ability to make LGBTQ-specific comedy accessible across the sexuality spectrum. I mean, how many other Y chromosome carriers have gotten to perform at the XX-centric Ladies Are Funny Festival? Hardesty has also been a major force in the storytelling showcase Greetings From Queer Mountain, monthly at Cheer Up Charlies, and in getting Chicago's Encyclopedia Show going in Austin for a time. With Hardesty, the Windy City's loss is the River City's gain. – R.F. It's possible that, back in Connecticut, Rob Gagnon never thought to himself, "Andy Kaufman is dead ... and I want his job." But he's been running the ever-surprising Sandbox showcase at the New Movement for years now. And, at 31, the recent FPIA finalist's style? "John Buseman and I do this bit like we're in Cirque du Soleil," he says, "where it's just two guys balancing on each other and they dim the lights and add dramatic music? Our version is much clumsier: We tuck our underwear into thongs, I stick my gut out, we struggle to strike very simple poses – and it's glorious. We don't say a word and keep a stern face the entire time as we flail through the audience." – W.A.B. "I was in a Walgreens ... at night. So already I fucked up." That joke that opened the set with which Mac Blake won the 2013 Funniest Person in Austin title, tells you pretty much all you need to know about the economy and braininess of this comic – who stays way too busy to be crafting comedy that tight. If he isn't hosting stand-up showcases – currently, Waterbed at Spider House Ballroom and Six Shooter with Aaron Brooks at Alamo Drafthouse Mueller's Barrel o' Fun club – he's performing with the group Movie Riot at ColdTowne, guesting with Master Pancake at some Alamo, or making comedy videos with sketch group Stag. We're lucky he made time to record some of his stand-up for posterity on the Sure Thing album Bird Drugs. – R.F. Depression and hopelessness have rarely sounded as funny as they do coming out of the mouth of Amber Bixby. Her deadpan style and dark material – shaped in large part by her experiences growing up in very provincial, small-town East Texas – have earned Bixby the title "Comedy's Sweetheart of Darkness." It's a nickname that captures the appeal in her particular sort of pessimism and woe; at the mic, she doesn't throw a pity party so much as lay out the hard hand life has dealt her and mock each card. Her endurance on the scene and popularity at festivals (Fun Fun Fun Fest, Moontower Comedy, and Boston's Women in Comedy Fest) are proof that good comics can work black as well as blue. (See also Bixby's web series Pretty Awful.) – R.F.

Who can resist "Austin's only meta-comedy/musical duo," especially when one of the members wears a trademark bandanna? Born from the sublime mismatching of "Zac Carr and Gabe R.," SNACKS began performing at local open mics in 2015, its eloquent original songs playing like a fusion of Raffi and Flight of the Conchords. The pair has since added whimsical paper props, self-aware canned banter, and the sweetest crowd-work in town, creating a singular and significantly funny act that fills a void in local comedy. Appearances at the New Movement's Sandbox and Avery Moore-curated shows at the Velveeta Room have helped these songwriters quickly insinuate themselves into the stand-up community. Part performance art spectacle, part campfire sing-along, every SNACKS set is a sumptuous little treat. – S.L.M.