Going Underground at the Vortex

Lisa B. Thompson's new drama digs deep into politics past and present, and asks us all: What are you gonna do? 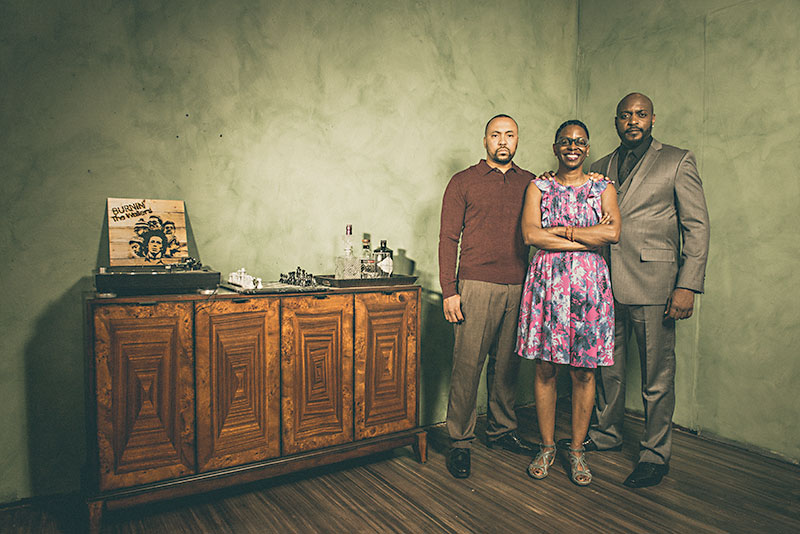 On the set of Underground (l-r) Jeffrey "DaShade" Johnson, Lisa B. Thompson, and Marc Pouhé (Photo by Sandy Carson)

To see Mason and Kyle sipping cognac while seated on a leather sofa in Mason's extensively renovated 19th-century brownstone, is to see two friends who have prospered in middle age sharing a drink. But there's more to the scene than is apparent on the surface. There's history there. Dig a little, and beneath the suits of this high-end attorney and professional activist, you'll find Dix and K, the college students these men were when they met 30 years before, students deeply engaged in protesting apartheid and its institutional support in the U.S. There's history in the different worlds they came from, K's upscale neighborhood of View Park, the "Black Beverly Hills," and Dix's poverty-stricken, crime-ridden streets of South Central L.A. There's even history in the upstate New York townhouse where they sit: It once served as a stop on the Underground Railroad.

All that history – and the tension buried with it – is unearthed in Underground, a play by Lisa B. Thompson that begins its three-week world premiere run this weekend at the Vortex. Kyle's appearance on Mason's doorstep is unexpected – the two haven't seen each other in almost a decade – and while Kyle insists he's come as an old friend, the turn of conversation toward their days of student activism and Kyle's involvement with a new and controversial protest movement – which is also the focus of news reports on Mason's TV – moves chummy reminiscence to charged political debate. The focus becomes "What do we do now?" with the two men as divided in their views as Malcolm X and MLK or W.E.B. DuBois and Booker T. Washington. And as Kyle and Mason grapple philosophically and rhetorically, their warring words span generations of African-American activism and thought, from the era of slavery to Black Lives Matter. It's a drama that speaks powerfully to the present moment, but always with an awareness of what has come before.

Now, those who know Thompson's other plays may be surprised to find her penning such a hot-button, heavyweight drama as Underground. So is she. "I usually write comedy, so this is a real departure for me," she says. "I'm somewhere between August Wilson and George Wolfe and Ntozake Shange, probably. Those are my influences. I'm wearing more of the Wilson hat now, doing a straight play and tempering my comedic voice." So what led the author of Single Black Female, The Mamalogues, and Dreadtime Stories: One Sista's Hair down this road? The Chronicle caught up with the theatre artist, scholar, and associate professor of African and African Diaspora Studies at the University of Texas in the rare moment when she wasn't busy with rehearsal, research, or her 11-year-old son to ask.

Austin Chronicle: There's a lot of courage in that script. Did you approach the play with strong intent or was there some part of you that wondered, "Should I be doing this?"

Lisa B. Thompson: Both. [I was] trying to write down the feeling of living through three events: I lived in Los Angeles through the uprising-slash-riots; I lived in Los Angeles during O.J. Simpson – at least when the murders were happening and I lived through the chase; and I moved to upstate New York three or four weeks before 9/11. What I'm trying to capture is that feeling of emergency, of living in those days.

I was also a student of Anna Deavere Smith at UCLA, and I remember her doing Twilight: Los Angeles, 1992 and capturing all these voices, all this cacophony. So I'm trying to capture living through these states of emergency, and being this black woman who's sort of been privileged to be in certain kinds of rooms – going to Stanford, being at UCLA, having a fellowship at Harvard. It's an interesting space to come from with parents who didn't finish college, so I want to capture that feeling of anxiety of being in emergency but also capture what it means to, in some people's eyes, have a comfortable life and still look around you and feel like, "This is never gonna get any easier, is it?" [Laughs] "I mean, this is it?"

So it's scary. Also realizing – especially when the election happened – "Oh my god! This is not a good time to be writing something like this. I'm gonna be on every list." But then you're like, "I'm probably already on the list anyway."

AC: The play has such a great grasp of the present moment – this is a CNN broadcast, this is a New York Times headline – and it's also encapsulating debates that have been going on since the modern civil rights era, certainly, but also going back to the early part of the 20th century and beyond.

LBT: Since those people had to decide: "Harriet Tubman is coming. Are you going to run or are you going to stay?" So this play is a long time coming.

AC: Did you start knowing that this play would dig through this dichotomy of ideas?

Later, it became about unfolding these two sides: How do you grapple with black liberation? Has anything ever been done other than laws and "Aw, shucks, sorry. Work it out"? And what does it mean that your friend's child could be Tamir Rice or Michael Brown?

I don't know, I think it's very comfortable to be mad on Facebook and call your senators and all that stuff we're doing, and it's scary to give up your summer at the Vineyard and your deliveries from Crate & Barrel and Amazon and all that.

The last act of the inspiration was watching – live watching – what's going on in Ferguson, what's unfolding in different places, and you're a person of a certain age looking at the younger people and thinking about what we did when we were younger. We did occupy UCLA and close it down for days for anti-apartheid – that really was a golden moment and those friends of mine are now attorneys and D.A.s and prosecutors. It's amazing to see the careers they've had.

So thinking about the place you are in your life, and either there's one last hurrah – we gotta go and rage against the machine – or you're just gonna tutor kids and, you know, be a volleyball coach and give back in ways that are comfortable. I don't know. The answer is, perhaps, different for different people. Or the answer is there is no answer. Speaking it out loud is very scary.

AC: Were there voices from your past in your head as you were writing the play? Ghosts at your shoulder, whispering things?

LBT: Mostly for the college scenes, the flashbacks. When I was an undergraduate, there were several people who were kind of like Kyle, "fifth-year seniors" – you know, "How many five years have you had?" – and they were the most radical students. One of them was a dear friend. The first time I met him, I was a freshman, he was speaking at a rally, and I was in the back going crazy – "Give it to the people!" – this was 1983, right? After he finished, he came up to me and said, "Who are you?" And we were friends from then on. So he's definitely there. I should probably change the dedication [of the play] to him. He was amazing.

AC: Will your son see the play?

AC: Have you had expectations of what you want people to walk out of the theatre with?

LBT: The challenge of these opposite poles and how to approach that, really thinking about that and being honest. If you're really gonna tutor and call senators, whatever you do, own it. And make it sing, instead of doing it in a way that you feel uncomfortable with. What are you gonna do?

What are you gonna do?

'Cause it may be a knock at the door when you have to decide. What happens if people start going door to door, grabbing Muslims? Are we really gonna say, "I'm gonna call my senator"? Are you gonna stand there and watch them drag someone away?

I don't know. Stuff's gonna get – it has gotten .... Things have happened.

But I'm so proud of my country, too. The day after the election, seeing the students protest on campus – they protested all day, morning 'til night, every type of student, in terms of sexuality, in terms of gender, in terms of age, of race, nationality, religion. I was so proud of them. And I just felt that this is the future. I don't feel afraid about that. And that's real.

A version of this article appeared in print on March 24, 2017 with the headline: Boarding Call