Ensemble VIII sang this Renaissance music for Holy Week so feelingly, it conjured shadows in a room full of light 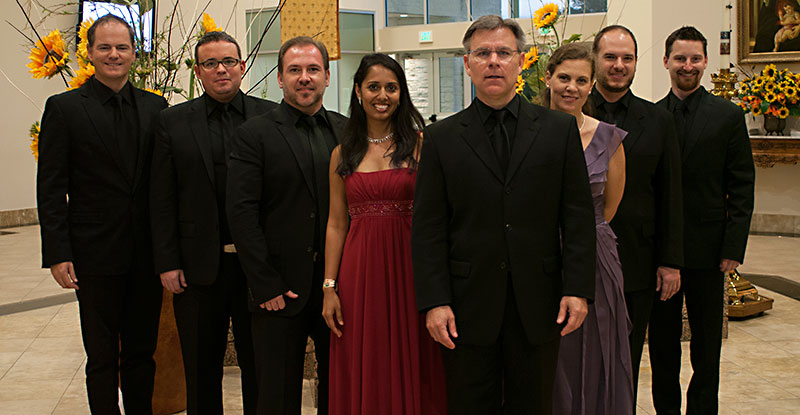 Shadows couldn't be seen much in the brightly lit sanctuary of Westlake Hills Presbyterian Church last Thursday, but they could certainly be heard. That nifty act of synesthetic sorcery was accomplished by the professional chorus Ensemble VIII, which was making early preparation for Easter with a program of music by the 16th century Spanish composer Tomás Luis de Victoria. The 18 a cappella motets selected by Artistic Director James Morrow were all written by Victoria for Holy Week, specifically for Maundy Thursday, Good Friday, and Holy Saturday, the days in which Jesus was betrayed by Judas, tried before Pilate, crucified at Golgotha, and laid in the tomb. It is a time of spiritual darkness that Christian tradition has often observed with rites of literal darkness: the tenebrae, services where the only illumination is provided by candles, which are gradually extinguished until the place of worship is completely dark.

Morrow opted not to follow that dramatic tack for this performance; from first note to last, the level of the electric lights in the sanctuary never altered, never dimmed – he and the other seven singers who comprised the ensemble that night were fixed in a brightness that bordered on glaring. And yet, such was the power of the material and the choir's adroit treatment of it that a gloom descended. In the program's first third, covering the Last Supper and Jesus' betrayal in the garden, much of the text focused on Judas, "that dealer of wickedness," "the wretch" who delivered Christ to the authorities "for a handful of coins," about whom they sang repeatedly, "It would have been better for him had he never been born." The singers took a forceful approach there and brought the full weight of that judgment down upon the betrayer, even as they sustained the beauty in the music. It's always the case with this chorus, no matter who makes up the "VIII" in the ensemble, that the voices soar and dip and swoop and glide with the breathtaking elegance of birds riding currents in the air. But what gave this performance an added impact was the power that they brought to bear in moments of high tension, as in the final line of the Maundy Thursday motet Seniores populi, when they attacked the phrase "cum gladiis et fustibus" with the violence of swords hitting together, or in the Animam meam dilectam of Good Friday, when they sang, as Jesus, "posuerunt me in deserto solitudinis" – "They placed me in a wasteland of desolation" – and the voices, already sounding so wounded, swelled in indignation at the extremity of his rejection by men. In the lines following, "Men rose up against me without mercy and would not spare my life," and "For there was no one who would acknowledge me or give me help," the choir found a depth of feeling in which the salt of betrayal from the first section became mixed with vinegar from the isolation experienced by Christ on the cross.

All but one of the ensemble members expressed these deep emotions only through their voices, their faces maintaining an impassive focus on their music stands broken by the occasional smile when they would look up to check in with one another during a song. The exception was Morrow, who throughout the concert was caught up in the pain and anguish of the text and music in every way. The passion of the Passion could be found in the intensity of his gaze, the tightness of his shoulders, the gritting of his teeth, as well as in his voice. And because he stood apart from the others in this physical expressiveness, he seemed almost to be taking on an extra measure of this pain for his fellow singers, shouldering it for them. Now, from what I've seen, every artist in this group is too gifted and skillful for any one person to truly carry a heavier load than anyone else, and Morrow appears to have directed the group to be a true ensemble. But his evident engagement with this material speaks to the fervor with which Morrow guides Ensemble VIII and how he is able to conjure shadows in a room full of light.

Up at VIII
With its heartbeat pulsing at Austin's tempo, choral group Ensemble VIII continues to climb