Inside the Antique Marketpace, four women have created a space where they can develop as artists together 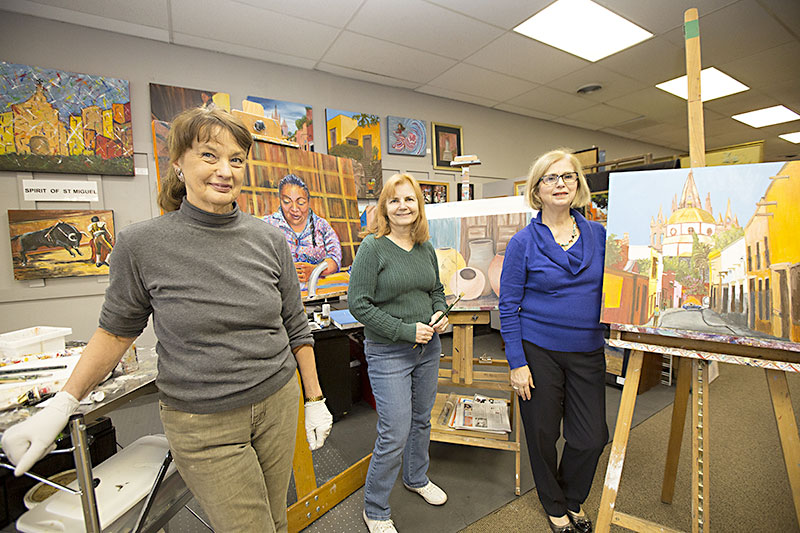 Antique Marketplace is a great place to peruse if you're in an antiquing state of mind. During one visit, my wife and I stumbled on a $60 painting of a swan and a lawn flamingo nuzzling under a charcoal sky. We were charmed by its weirdness. The two birds are framed by two large, green plants. Behind them is a low brick wall (really low – it isn't even as tall as the flamingos). The leaves of one of the plants are interspersed with white, as though the artist couldn't quite get the background color completely filled in. One of the plants is held by a large pot that is decidedly two-dimensional. I can't tell if both birds are ornaments or alive or what, but really it doesn't matter, because the painting is so happily uninterested in perfection. It's hilariously unserious, an attitude cemented by the amazing title: Interracial Marriage.

Interracial Marriage, painted by Martha Kull, is only one of dozens of works made by the artists of the Marketplace Art Gallery, an on-site studio and art space formed in 2016. The artists include Kull, Mozelle Marks, Ghislaine Barillaud, and Gail G. Sneden, each of whose work is adventurous and reflective of the individual opinions and experiences of the women themselves.

The group met six years ago during a studio program at Laguna Gloria. Eventually, they began to meet in other spaces around town to continue making work together. In the meantime, Marks was selling her own antiques at Antique Marketplace. She took note of a free space there, and the group approached the owner, Ben Hardin, who let them move in. The arrangement has led to an ideal situation in which the women can create, show, and promote their work at the same time that the Marketplace benefits from a unique activation of its space.

The interactions between the artists' styles have resulted in an ever-changing, ever-surprising array that ranges from folk art to landscape and beyond. Barillaud is the abstractionist. After a career revolving around technology events and world travel, Barillaud, who originates from France, settled in Austin. She describes herself as the "black duck" of the group, because her work tends to be the most conceptual. A wall even had to be put up around Barillaud's workspace to guard the rest of the studio from splashing paint. Many of her paintings feature streaks of black or blue on white backgrounds, similar to a Kline or Kandinsky. She also tends toward the unpredictable. "She'll have this really nice painting that we all just love," Kull says, bemused, "and then she'll paint the whole thing white." Barillaud says she doesn't care if people understand what her work is about or even if they like it. "If they like, they like," she says in a thick French accent. "If they don't like, they don't like."

Barillaud uses the word “synergy” to describe how their processes inform one another, but the lively mishmash of styles also speaks to the women’s energetic dedication to their own growth as artists.

Marks describes her own work as "pretty traditional." After a career in interior design, during which she was obligated to cater to the tastes of others, she finally gets to do what she wants. She enjoys landscapes, cars, and Austin scenes. A painting of Sixth Street features Shakespeare's Pub and the Ritz, a dangling American flag, and an empty sidewalk. It is a night scene, but the image is bright, the lines free and smooth, even along the edges of the buildings, so that the scene seems languid and easy, like an Archibald Motley. Rural Texas 1930s also has an American flag, though the flag drips down its pole for lack of wind. A black classic car is parked in front of a simple country post office. A dirt road curves into the distance. Like her painting of Sixth Street, the image is empty of people. In both paintings, it is the elements of the landscape that provide the personality and the story, and the confidence of her ambling brushstrokes that form the mood.

Sneden's Austin Bat Bridge is a good example of how the work of the four artists can converge and overlap. On the surface, it is a basic rendering of the Austin skyline over the Ann W. Richards Congress Avenue Bridge, an image more typical of Marks. However, on closer inspection one sees that the bridge's posts and arches are actually bats with their wings spread, an amusing choice that shifts the painting from realism into playfulness. The addition of the bats isn't something one would expect from a Marks. That said, there are no rigid lines between what the artists will and will not do. Barillaud uses the word "synergy" to describe how their processes inform one another, which is no doubt true, but the lively mishmash of styles also speaks to the women's energetic dedication to their own growth as artists.

The gallery is an open studio, which allows visitors the rare opportunity to see that growth in action. The creative process is defined by failure and endless experimentation. While many artists would be hesitant to expose that process to the public, these artists are fearless about taking risks and even making mistakes that will immediately go on display. When asked whether having an open studio has benefited the work, Marks says, "Absolutely." It has expanded their interests and allowed them to have conversations with strangers about the work as it is being made. Another happy benefit for the artists is that they can try things without fear of how it may be received, because everything they make is going to be seen right away. Like performance artists, these women find strength in the bracing jolt of diving right in.

One example is Sneden's Artists on the Bosphorus. A spectrum begins on the left with elongated, distorted figures that dissipate into simple bars of color on the right. Sneden, a former high school science teacher and program director at the University of Texas, had completed the figures before she noticed the similarity to a spectrum. Wishing to emphasize the effect, she completed the painting on another canvas and now displays both canvases as a single painting. I've spent years in the contemporary art world, where decisions like these are often made only after much hemming and hawing, as if the artist's entire career hangs in the balance. Sneden just went for it. The result is admittedly crude but also entrancing for its sheer delightful honesty.

Honesty defines all of the work here, but perhaps nowhere more than in Kull's. Kull used to be an engineer and acknowledges that the work she did once is "very different than what [she's] doing now." The best word for her practice may be "wild." I already described her wacky flamingo painting, but that's only the beginning. Even more extreme is her collage, Sophistacats, a bizarre picture of an otherworldly garden decorated with cutout photographs of lounging cats. That is outstanding enough, but these are not just any cats. "All of those cats are or have been mine," Kull explains. That is nuts, and I'm all in.

Kull calls her work "campy" and says she "would love for people to look at my painting and just burst out laughing." She is constantly trying out new media. "I really can't decide who I am," she says, and that lack of definition seems to have opened a lot of doors for her. She can make a zany picture like Sophistacats, but she can also make a tranquil photo series of leaves and oil smears from around her neighborhood. At one point during my visit, the group engaged in a discussion about an abstract painting by Barillaud called Oppression that deals with the Taliban's treatment of women. "My painting is generally more happy," Kull finally commented. "I want something that I think is pretty."

The vast differences between Barillaud's Oppression and Kull's Sophistacats is typical. There is something here for everyone, including children, who are welcome in the studio anytime and are sometimes given their own smocks and easels to join in the artmaking. Austin is full of talented artists, but much of the work I see, while excellent, seems uninterested in its own audience. This is a common theme in the contemporary art world, and it has its merits. It can lead to powerful work that is beholden to no one and makes complex assertions about an ever-complex world. However, it can also be cold, trite, and exclusive. The Marketplace Art Gallery is the opposite of those things. It is fresh, whimsical, and very inclusive. The work itself is ready to be loved. It is vivid. It is crazy. It is funny. It is free. When asked what her goal for the future is, Marks responds by saying she would like to "continue to grow and develop. It's a journey with very pleasant people who are growing along with me." I can't think of a better motto for the creative life.

A version of this article appeared in print on March 17, 2017 with the headline: Open for Growth 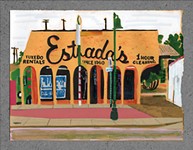