As he leaves Austin, the award-winning curator and artist reflects on the city's artists and art community 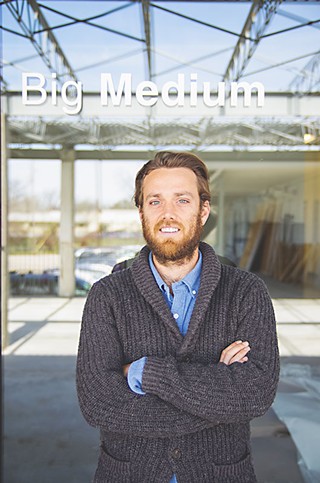 To be a part of Austin's nascent art scene is to know Kevin McNamee-Tweed. He arrived in Austin in 2009 and has been kicking around the city's galleries and studios since 2012, when he started curating Big Medium's Canopy gallery. He's snagged two Austin Critics Table Awards and three nominations for his curatorial work and exhibitions. His Books publication was released through Farewell Books, Raw Paw Press, and Molasses Books in 2015 and includes the fictitious title Muskets and Mulberries: Trying to Be in Love When an Old Timey War Is Happening Around You, which continues to produce snorts of joy even two years after the fact. His studio was a fixture at Big Medium's Bolm space, and he helped manage Bolm's other studios, including ATM Gallery. He's been in solo and group shows at Pump Project Art Complex, Co-Lab Projects, Lower Left, Las Cruxes, the late Tiny Park, and most recently at the Museum of Human Achievement for his farewell show, "Self-Tourism." That's right, McNamee-Tweed is leaving Austin for greener pastures.

It's a shame to be losing him, as McNamee-Tweed has been one of the city's keenest artists, imbuing his art with a combination of satire and nostalgia, while creating a color-saturated aesthetic that still feels new, even throughout his tremendous breadth of work. Given his remarkable impact on Austin, it felt only right to pick his brain as he says goodbye to the city.

Austin Chronicle: "Self-Tourism" contained hundreds of monoprints that documented your travels through the American West. What attracted you to monoprinting?

Kevin McNamee-Tweed: I've always lusted over the image character of prints but had never done much more than screenprints. PrintAustin seemed like a good opportunity to try it out. Zac [Traeger, gallery director of MoHA] and I planned to show whatever I came up with at MoHA in January, which was about six months away at that point. I didn't actually try anything out except the monotypes, which I really enjoyed. It's essentially just like drawing, only backwards and blind and with very little control. A lot of nice effects are possible, [and there are] many, many mistakes. Now that I have some fluency with the technique, there is less divorce between my intention and the result, but still there is some crazy shit that happens. It's a dynamic medium.

"Self-Tourism" was always going to be about my travels to Nevada and Colorado, but I envisioned something quite different. That's the nice thing about material-based modes of creative inquiry; you work within the confines of the truth that is possible in that medium. I couldn't do what I'd originally wanted to do, but monotypes were such a mindfuck that I was distracted and stimulated enough to bust out 369 of them for the show.

AC: The American South is a large portion of your personal history and often finds its way into your work. How do you think Austin has impacted that?

KMT: The American South was a good mythology to have in my pocket when I went to school in New York. At a time when you're constantly confronting yourself – all versions past, present, and future – it was nice to have my Southernness as an anchor. New York was also overwhelming after growing up in North Carolina, so I found comfort in it. I still do.

I don't know how Austin makes its way into my imagery and narrative. I do know that it has been a place where I could actually make work. The passage of time here has a good personality about it which I find conducive to my version of productivity. The weather, too. People are half-easy here, which I like. The whole relaxed-with-a-kick thing is great.

Certainly the color situation in Texas has influenced my work quite heavily, but I haven't made a lot of imagery based on Austin or Texas. I don't think it's because it doesn't move me. It's more that it didn't jibe with my drawing style, like I couldn't draw the trees and plants here and the land very well – it just didn't come out great. Sometimes that's just how it goes; you have to use the forms that offer themselves up to you. I'm better at drawing triangular trees – conifers – so that's that. They look better and, since this is art, that's what matters. 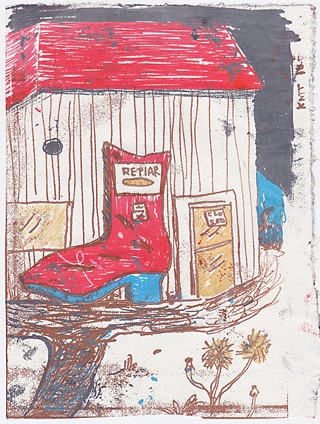 Kevin McNamee-Tweed’s Boot Repiar
“Austin doesn’t have a bunch of high-powered commercial galleries with vast clientele networks and decades of experience. We have artist-run spaces. We have no market, but we have a solid community.” – Kevin McNamee-Tweed

In terms of the stories I tell, plenty of Austin's personality has made it into my work. I have indulged the nationalistic themes of Texas identity a bit, too. I think I'll understand the ways this place has influenced my work better once I leave and put some time and miles between us.

AC: As an artist, you've had the chance to showcase in galleries across town while also acting at the curator for Big Medium [a role that will continue remotely]. Having lived on both sides of the experience, how do you think artists can find success when they approach galleries?

KMT: Have a flexible definition of success. When I look around at the ways my friends and colleagues are making lives as artists, here and elsewhere, a few things are clear: First, everyone has to puzzle it together for themselves, and second, it's going to suck sometimes. I'm OK, for the time being, living with financial uncertainty. That's probably important. I would say just make your work, worry about galleries later. It never really works to approach a gallery. If you make good work, are dedicated to it, the shows will come. And for emerging artists, it's important to be able to live with making work that you hate, that you know is not worth shit, but to keep on making things, trying new things, new voices, new languages, new techniques and materials. If you get hung up on the fact that your work is obviously not good, then you won't make it as an artist. The same is true for showing in galleries; if you freak out about not showing in galleries, you'll trip up some. Soon enough, one of your friends will start a house gallery anyway, so don't worry.

AC: How do you think curators can continue to create thoughtful exhibitions?

KMT: Well, in a town where there is pretty much zero market pressure, galleries and artists have the freedom to present shows in a manner that aims to really support the work. Often a clean, neutral, 67-inch on-center hang is what serves the work best, but I'm interested in seeing shows in which you can really feel that the artist and curator have considered how the work should be engaged. Should it smell like peppermint in the gallery? Would it be nice or stupid to hide a painting near the ceiling? Should Erik Satie or Phish or Destiny's Child be playing, or should there be silence? Taking a risk in the world of art is pretty impossible because it's most likely that it won't come off as irreverent or visionary, rather it will reek, in all likelihood, of hack art clownery. That said, it's important to sprinkle in some half-baked decisions with the thoughtful editing and distilling required of a good exhibition. I just want to enjoy myself at an exhibition, but I'm pretty easy since I really like art. You're pretty fucked if you don't [like art], because gallery openings can be the absolute worst.

AC: Selling art in Austin – why is it so hard?

KMT: Very few artists are financially stable anywhere. The rest have day jobs. Austin is no different, but the lack of market here makes it impossible to claw your way toward financial independence. It sucks having to sell all your work to New York or L.A. or Dallas or Dubai. The price points here are totally unsustainable. Get a job. I recommend tech – there's lots of money in that, and they have great office kitchens. If you don't care about kombucha on tap, then see if you can work as little as possible and spend all your time making art.

AC: What do arts institutions need to do to better serve the Austin arts community?

KMT: I think Austin is doing pretty well. The institutions are abundantly aware of the limitations artists deal with here, and we all know how hard the spaces here work. It's just a different kind of town. The main thing that makes some places more financially viable for artists is that there is a market. That has its own problems. Austin doesn't have a bunch of high-powered commercial galleries with vast clientele networks and decades of experience. We have artist-run spaces. We have no market, but we have a solid community. As the great battle for the cultural identity of Austin rages on, our institutions can fight for artists. That means understanding what it means to live as an artist and engaging the powers that be. While all this is obviously important to me as a person devoted to a creative life, it can't be overstated how important sensitivity, openness, and generosity will be as neighborhoods continue to be made over. As the anchors of that ugly makeover, artists and arts institutions have a responsibility to not let everything get totally fucked up. Be good neighbors.

AC: What do you think the greatest asset in Austin's arts community is?

KMT: That artists are still calling the shots.

A version of this article appeared in print on March 10, 2017 with the headline: Just Make Your Work 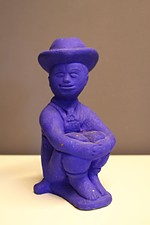 "Angelbert Metoyer: Life Machine" at the Canopy
For this Co-Lab Projects exhibit, a gallery at Canopy becomes a tomblike space for exploring religion