New technologies have made interacting with friends and loved ones in faraway places easier than ever before. My wife has regular Skype dates with two friends in two other cities during which they essentially hang out via laptop. When she goes out of town, my wife and I use FaceTime on our phones so we can see each other, and so she can see our dog, Normal. I understand that my wife isn't in the room with me and Normal, but that's easy enough to ignore: There she is. I can see her, on a very small scale. Occasionally, I'll show the phone to Normal so she can see, too. Typically, when my wife walks in the room, Normal goes nuts. But when my wife is only nebulous shades on a flat object, the dog couldn't care less. My wife smiles and calls Normal's name, and all Normal offers is a blank stare in another direction.

That disconnect is illustrated neatly in Sherry Xiao's "Thinking of Home," a series of commentaries on the shortcomings of digital interactions. Skype Call With Parents, which, as the title indicates, re-creates a Skype conversation the artist had with her mom and dad, is a set of nine paintings in a 3-foot by 3-foot grid. In each image, the figure of the mother in a maroon shirt and the father in a striped one can be made out, but they are significantly distorted, blotchy with smeared blocks of color meant to emulate the pixelization of a laptop screen. The pixelization is extreme, the jittering, maddening type you see when the wireless connection is faulty, where the figures on the other end are clear enough in general but almost nonexistent in detail. I can't see arms, for example, and forget about eye color. Even so, the most moving aspect of the piece is the father's smile, a flicker of shadow or bright teeth expressing the kind of joy one feels when they are put in contact with someone they cherish – someone who has been gone too long.

Imagine 15th-century nobles looking at a painted portrait of a deceased loved one. Are they really looking at the person they've lost? No, but maybe just enough. Or go further back to a prehistoric human admiring a vague figure streaked over the wall of a cave. Could it remind them of someone they once knew? I have a feeling you could put our dog, Normal, in front of any one of these and you would get the blank dog stare, because Normal knows the re-creation of a human is not actually a human, loved one or not. But the problem persists. We persist. Xiao used Skype to stay in touch with friends and family while she was away in Florence, Italy. I use FaceTime to see my wife when she's out of town for work. I know that what I see isn't really my wife, any more than her electronically rendered voice is or a text message or a handwritten note. Or a photograph. Each of these is an artifact of our inventive ability to be close, though nothing can replace whatever it is that makes Normal jump off the couch when she hears my wife's car pull up outside. What is that about anyway? What about the Skype conversation is real, and what is not? What are we anyway, and what can we be, aside from our traces? 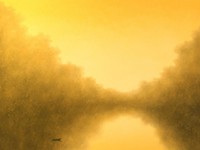 “Vivid Strokes: Contemporary Paintings From Vietnam”
In our tumultuous moment, seeing work by artists from nations that have known tragedy our own has not can be enlightening