Asking what difference art makes in the face of revolution, Jenny Lavery and company deliver an engrossing production 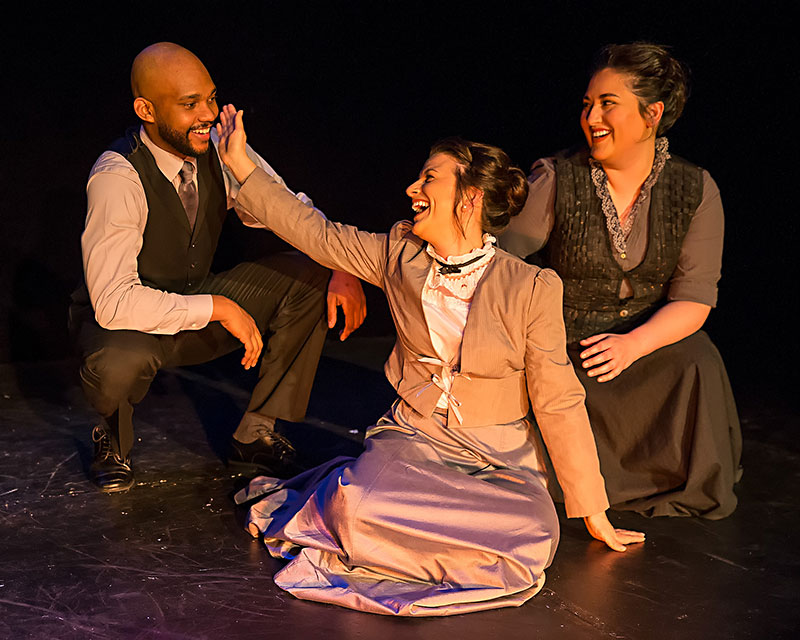 "There is going to be a revolution."

So says one of the players in Neva, a play from Chilean playwright Guillermo Calderón receiving its local premiere from Theatre en Bloc. The line seems timely now, but in a time of tremendous chaos, everything is timely. Like the characters of Neva, we are not living in an era of calm.

At the show's opening, we see Olga Knipper (Liz Beckham) practicing some lines from The Cherry Orchard, one of the masterpieces penned by her recently deceased husband Anton Chekhov. She breaks character and frets about what she fears is her declining talent. It's a hilariously self-aware rumination on an actor's vulnerabilities. ("Like a wet puppy, I will ask them, 'Did you like it?'")

Two more actors join her, Aleko (Kriston Woodreaux) and Masha (Lori Navarrete). The three engage in an unsupervised acting workshop of sorts. They play through scenes. Aleko delivers a long, elaborate speech confessing his love for Olga, the winding threads of which are reminiscent of Chekhov's own work. It turns out to be an act, and the actors are delighted in their own ability to fool themselves. At Olga's command, they also return to the scene of Chekhov's death from tuberculosis at a health spa in Germany. Perhaps, if they play through it just one more time, Olga might gain some deeper understanding of the banal final moments of her husband's life.

Through all this, the three gossip and compete. Olga and Aleko mock Masha's performance and her inability to speak German. Meanwhile, the three are vaguely aware of trouble brewing outside the theatre, but the space itself seems sealed against time and politics.

Then, suddenly, Masha erupts. She reminds them that striking workers are dying outside as they speak, yet they remain inside, preoccupied with their craft. This is St. Petersburg in 1905, the day of protests that started a revolution – not the Russian Revolution of 1917, which toppled the czar, but one that led to thousands of deaths nonetheless. After playing her part in their rehearsal, Masha spits with the fury of the unheard masses, demanding to know if anything about their art is relevant.

Had this production appeared even six months ago, the suddenness with which Masha snaps and reveals herself to be among the revolutionaries might have seemed far-fetched. But this is now. Clearly something has been brewing outside the doors of the theatre, and we as an artistic class have not until now been fully aware.

Calderón asks what difference art makes. He pulls heavily from Chekhov, who famously illustrated the inability of humans to see what's happening around them and take necessary action. In this script, those who make theatre are akin to Chekhov's delusional, fading nobility. It's a curious suggestion in a work for the stage, but given how frequently politically themed theatre plays only to those who already agree with the message, it may be a valuable one. At the same time, accepting that art is ultimately self-indulgent fails to take the long view of how human culture and memory are shaped.

Jenny Lavery's direction of Neva is quick and satisfying, and the three performances are excellent. Having seen Beckham perform twice now, I'm convinced that watching her make coffee in the morning would be worth the price of a ticket, so expressive are her reactions to every line and incident.

Neva may not provide a satisfying answer to its own central question, but the caliber of the work makes it an engrossing 90 minutes.

Santa Cruz Center for Culture, 1805 E. Seventh
www.theatreenbloc.com
Through March 5
Running time: 1 hr., 30 min.
A version of this article appeared in print on March 3, 2017 with the headline: Offstage, a Revolt