Austin Playhouse's Death of a Salesman 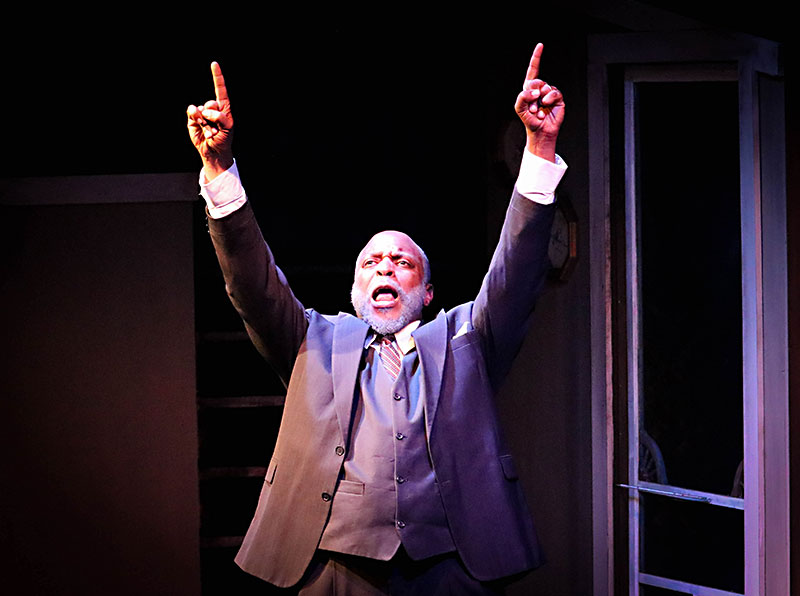 Years ago, I listened in on a conversation between several literary managers and dramaturgs who were debating, in a friendly way, what play could be considered the definitive work of American theatre. The group settled into two camps: Thornton Wilder's Our Town and Arthur Miller's Death of a Salesman.

At the time, the Salesman advocates just seemed depressing, but as history unfolds, one begins to see their point. At a time when a significant part of the American population has been stirred to anger over what they view as unfair limitations on their prosperity, the character of Willy Loman appears painfully relevant.

Willy has worked as a salesman for the same company for 35 years, driving all over New England to hawk his wares. His wife Linda and his adult sons, Happy and Biff, witness the final stages of Willy's decline. At 63, he is too old to keep logging 700 miles a week. His success is fading, and the company has cut his pay to commission only.

There are threads of ageism, but make no mistake, Willy Loman's story is one of self-destruction. Helping hands are offered, but Willy's insistence on self-sufficiency won't let him accept. He berates his sons for their failure to thrive, especially Biff, who was once the high school football star bound for college on a scholarship, only to fail math in his last term and never graduate. In Willy's mind, which increasingly sinks into fevered pitches of fantasy and memory, Biff's downfall is a baffling insult to him. He never recognizes that the ways he held up ideals of masculine heroism and success set a trap for Biff.

In this Austin Playhouse production, directed by Peter Sheridan, the roles of Willy Loman and his family are cast with African-American actors. It's gratifying to see the canon opened up to actors of the caliber of Marc Pouhé and Carla Nickerson. As Willy, Pouhé has clearly done the work to understand how the iconic character ticks. Willy turns on a dime between hope and despair and back again, and Pouhé's execution of the work is powerful and sympathetic.

Yet while it's interesting to consider what roles consumerism and patriarchy played in the African-American community in the Forties, it becomes tricky to view the casting with too much historical context. A black salesman in that era experienced real, external obstacles to success, even if he operated largely within the African-American network of businesses. Salesman is a story about the character flaws of Willy Loman and his inability to recognize his own internal limitations. If we as an audience watch without considering too much of what we understand to be the racial history of the period, our view of Willy Loman's downfall remains unobstructed.

The set by designer Mike Toner impressively manages to pack multiple levels of a single-family dwelling into a space the size of Austin Playhouse. For some of the actors, though, sound gets swallowed up in the oddly shaped space, and lighting is not always sufficient.

Death of a Salesman has retained its relevance because, as those literary managers pointed out years ago, it is an American story. As Americans, we are raised within the framework – or the illusion, depending on your perspective – of American exceptionalism. To reject that worldview is to reject the inspiring idea that as Americans we are uniquely gifted, destined for greatness. To accept the myth is to live as Willy Loman and turn a blind eye to how an individual's choices can lead to failure.

Death of a Salesman