Twelve months after Mayor Steve Adler rolled out his plan to save live music and the arts, what's happened? Illustration by the Chronicle Art Staff

As Mayor Steve Adler took the podium on the Mayor's Balcony at City Hall in February 2016, the shining sun and blue sky seemed to signal this was a new day. And so it was for the city's music and creative sectors. He had brought together members of the Music Commission and Arts Commission – itself a rare thing – to stand with him as he unveiled his Austin Music & Creative Ecosystem Omnibus Resolution, a package of policy initiatives aimed at addressing critical problems in those industries (affordability; permitting and licensing regulations; economic incentives; et al.) and stimulating our creative economy.

Now, for years, the city had supported the music and creative sectors through offices and programs, and many city staffers, council members, and mayors had advocated for them. But never before had the city's leading elected official thrown so much of his political weight behind those sectors, going so far as to identify specific areas where the city needed to be proactive in improving conditions and directing the city manager to develop a plan of action within 90 days. All the shiny scene needed was those commissioners breaking into a chorus of "The Future's So Bright, I Gotta Wear Shades."

This week marks the first anniversary of the Omnibus Resolution's rollout. So what do our music and creative scenes have to show for the last 12 months? Not as much as you'd hoped, though maybe more than you'd think. If you followed the news over the past year, then you know the resolution didn't keep venues hammered by insane rent hikes from shuttering (R.I.P. Salvage Vanguard Theater, Brass House, et al.) or slow the exodus of artists and musicians over the city's lack of affordability. Nor did it resolve longstanding issues like how long and loud music can be played Downtown, meaning 2016 still saw headline-grabbers like the Westin's million-dollar lawsuit against the Nook over music volume.

So if we didn't get help in those areas, what did we get? A lot of talk – which, this being Austin, was expected. As a city, we're nothing if not prone to palavering, and in matters of municipal policy, we take full advantage of opportunities to weigh in. In April, the Arts Commission held a hearing on the Omnibus Resolution, and the Music Commission hosted several town hall meetings, each in a different district with that district's Council rep and Music Commission appointee attending, and each focused on specific forms of music (blues/soul/world, country & western/swing, Latin, rock, etc.). And at a historic joint meeting of the Arts and Music commissions, artists and musicians had more chances to comment.

But all that talk was useful talk. It reinforced how hard it is out there for a creative (stories of landlords raising rents 300-500% were common, as were tales of rough run-ins with the city's code compliance force). Listening to two communities that usually consider themselves separate species sing identical songs of woe meant both were suffering from the same ills and might be aided by the same solutions. (And to be fair, not all speakers were reporting problems; some were proposing remedies, based on successful models in other cities and local efforts already underway.) This also helped the commissions work out which of the resolution's policy areas to focus on first.

So what do Austin’s music and creative sectors have to show for the last year? Not as much as you’d hoped, though maybe more than you’d think.

See, the mayor's original proposal, which treated the music and creative sectors separately, contained 30 goals and 67 objectives. In June, city staff organized those into a set of "Stabilization Recommendations" grouping them into 10 areas – Affordable Space; Agent of Change Principle; Entertainment License; Incentives, Tools, and Loans; Cultural Tourism; Land Use Regulations; Music Genre Development; Permitting and Licensing; Professional Development; and Revenue Development – but the description of them stretched them out to 68 pages. As the Arts and Music commissions were tasked with prioritizing these for Council, each selected four as top priorities. It's telling that two areas showed up on both lists: land use regulations (opening restricted zoning areas in planned unit development and vertical mixed-use projects to creative spaces, facilitating development of affordable live/work spaces for artists) and permitting and licensing (streamlining the process of getting permits for creative spaces, bringing them into code compliance). The two bodies saw the crises in the same way.

Where the commissions diverged reflects the nature of their respective sectors and where they sit in the for-profit and nonprofit worlds. The largely nonprofit arts scene was more concerned with emergency assistance for companies and artists whose venues had closed or were threatened with closing over skyrocketing rents. Salvage Vanguard had to vacate its home of 10 years in June, which displaced not just SVT but also other groups that used it as a home base: Kathy Dunn Hamrick Dance Company, Trouble Puppet Theater Company, Glass Half Full Theatre, Church of the Friendly Ghost, et al. Moreover, the clock was running down on the Off Center, the Eastside space managed for 17 years by the Rude Mechs, who made it available to numerous other groups. In June, the nationally renowned theatre collective will be homeless and another of the most used arts venues in town will be gone. Losing two major performing arts spaces in a year, with others such as Pump Project Art Complex facing a similar fate, moved venue assistance to the No. 1 spot. As the private sector has little incentive to invest in nonprofit arts spaces, a city-managed funding pool or low-interest loan program that could help SVT, the Rudes, and others save their homes or transition to new ones would go a long way toward keeping these invaluable cultural resources alive and active.

For the profit-based music scene, with venues in areas of immense appeal to developers, more crucial was a tool that could protect them when new housing or hotels sprang up near them. That's why the Music Commission made a priority of the Agent of Change Principle. It put the financial onus for sound mitigation measures on a new development built near established music venues. Change the neighborhood, you pay for the change. As Kevin Curtin noted in a "Playback" column, "The ongoing Westin vs. Nook conflict remains the poster child for Agent of Change." Had it been in place, the Westin wouldn't have been able to sue; the Nook was there first, so the hotel would've been on the hook for sound buffering costs.

Both Agent of Change and emergency venue assistance gained traction from the city last fall and have been inching toward implementation in the new year. The Arts Commission recommended that emergency venue assistance be funded to the tune of $350,000; that was lowered to $200,000, but it made it into the fiscal year 2017 budget, as did two other Omnibus Resolution items: $200,000 to form an Entertainment Services Group that'll provide permitting and code assistance in the music and creative sectors as well as support the music sector's Austin Nightlife Initiative; and $75,000 to launch a Revenue Development Platform for fostering various initiatives from cultural tourism to professional development. On Jan. 26, Council voted to activate these items, and city staff is now working out how to structure the venue assistance program. It will report back to Council by the end of March. Agent of Change is also due for a March presentation to Council based on input gathered in January hearings about it and the Entertainment License, another music sector priority aimed at condensing the intense permitting process for music venues – which involves upward of 16 permits from seven departments – to one point of contact.

The Music and Arts commissions' other priorities, land use regulation and permitting and licensing, were put more or less on hold while CodeNEXT, the epic review and rejiggering of the land development code, was underway, though commissioners were kept updated on CodeNEXT activity by an advisory group member. With the first draft of the new code released, activity on those fronts should amp up. The Arts Commission will be briefed about it at its Feb. 27 meeting, and at the joint meeting of the Arts and Music commissions in March, CodeNEXT is expected to be on the agenda.

But the commissions' priorities aren't the only parts of the Omnibus Resolution where progress has been made. Preservation of creative spaces got a big push in September when the mayor announced a mini-bond program through which it would crowd-source $10 million for the purpose of saving music venues. (More news on this initiative with public finance company Neighborly will be coming this spring, according to the mayor in his State of the City address.) Under the radar have also been working groups with members from the Arts and Music commissions tackling affordability issues and a marketing campaign for creatives; a Music Tourism Strike Team (with reps from the Music & Entertainment Division, Cultural Arts Division, and Austin Convention & Visitors Bureau) that's drafted a cultural tourism plan; CAD staff winding up the Cultural Asset Mapping Project, with its final report due for release in late March; and Music & Entertainment Division staff completing its long-range Industry Development Strategy by the end of February and a Live Music Venue Best Practice Guide sometime this spring. And there are efforts outside the city sphere, among them the Austin Creative Alliance's Creative Infrastructure Initiative, funded with a $100,000 donation from Roy Mullin, that will support research, grants, and staff to develop creative infrastructure projects and support for them in the community, and Mosaic Sound Collective, which embodies the Omnibus Resolution's idea of a creative hub. ("Mayor’s Omnibus Resolution: Actualization Is Hard," Feb. 24.)

That's all to say that one year after the sunny launch of the Omnibus Resolution, our music and creative sectors still have lots of dark clouds overhead. But few crises in this city are solved quickly. We're like an ocean liner with no engine, propelled by passengers and crewmen paddling like mad. Over the past year, more people in the creative and music sectors have been paddling, and that's due to Mayor Adler, who hasn't stopped urging them on. As recently as Jan. 30, speaking to the state of the city, he said, "The home of Austin City Limits, of SXSW, of Ballet Austin, and of Laguna Gloria must continue to be a city where culture is created and not simply consumed. … Since this is Austin, the change agenda's focus on affordability must also deal with challenges in our local music industry and with our creative arts."

So the ship is moving. But if you think it isn't moving fast enough, grab an oar.

A version of this article appeared in print on February 24, 2017 with the headline: A Year Later 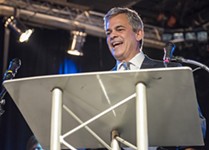