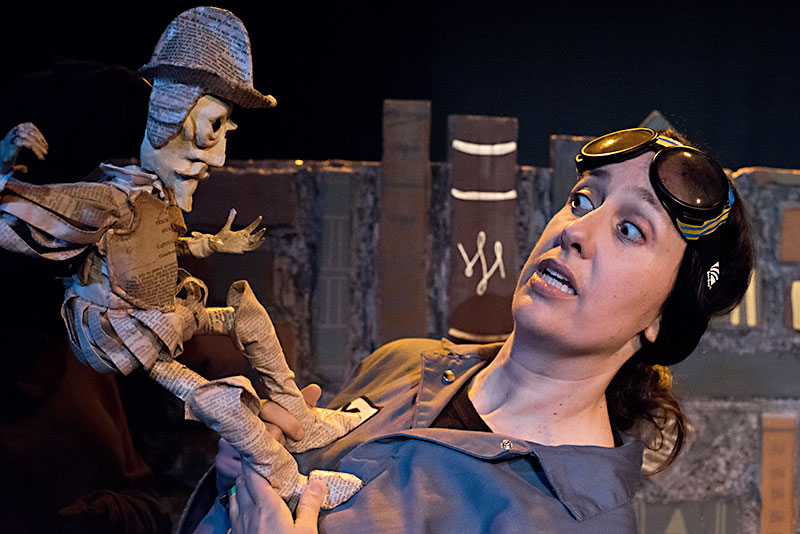 Once upon a time, a loud orange man with hands of indeterminate size ordered a tremendous wall to be constructed with the purpose of making his country great again. But there was a problem. There wasn't enough money to finish the job. So the great wall was completed with things people didn't want anymore. It is because of this that one particular section of the wall – located near Nuevo Laredo – is composed entirely of books. Now, 85 years after the 45th president is long gone, two border wall technicians working to preserve his dystopian legacy stumble across Don Quixote in the pile of pages and mortar. As the workers become better acquainted with Quixote and his ever-faithful companion, Sancho, a seed of rebellion is planted, and one thing becomes clear: While the urge to fight something that cannot die drives some to become demagogues, it inspires others to become heroes.

Miguel de Cervantes himself narrates Glass Half Full Theatre's incredibly imaginative and well-executed production of Don Quixote de La Redo, a puppet-laced meditation on the walls we build and the stories that inspire us to tear them down.

The show is also a very timely (and extremely effective) political commentary. Devised by the cast and stage management during a collaborative and improvisational rehearsal process, Don Quixote de La Redo began as a retelling of the Quixote legend set along the Mexico-Texas border, but took a different and darker turn after the 2016 presidential election, after our current president announced plans to build a giant wall along our country's southern border. As serious as the subject matter could be, the entire play crackles with humor – humor of all kinds, everything from literary references to dry wit to a good old-fashioned diarrhea joke. Another impressive layer in this colossal script is that it's heavily bilingual, yet written clearly enough for anyone to understand, even if sus españoles son malos.

One thing's for certain about Glass Half Full Artistic Director Caroline Reck: Between her writing, designing, acting, and direction, she is one incredibly talented artist. And in Don Quixote de La Redo, she has assembled an all-star creative team that has built an immersive world steeped in equal parts whimsy and postapocalyptic angst. In the span of 80 minutes, Reck and her castmates Rudy Ramirez, Gricelda Silva, Indigo Rael, and Marina DeYoe-Pedraza take the audience on a Quixotian adventure in every sense of the word. The design team's no slouch, either. Everything from the costumes (designed by Jennifer Davis) to the set (Reck) hides surprises of all sizes. K. Eliot Haynes and Taylor Juarez provide the soundtrack for the evening – an emotionally evocative mix of Spanish guitar and ambient emo-tinged alt-rock.

And, of course, there are the puppets. Quixote, Sancho, and Cervantes are small, multi-jointed dolls that are moved by several puppeteers (with precision timing) at once, resulting in hyperrealistic movement. Each character is beautifully voiced by the cast, and while there are other puppets on this adventure and they are absolutely worth citing, part of what makes this play so lovely is its commitment to present the audience with unexpected happenings (even after the show is over). This is a story that is not afraid to be whimsical in the face of ideas that are terrifying, and there's a lot of power in that.