Ballet Austin's Belle Redux: A Tale of Beauty & the Beast

In its striking concept and execution, Stephen Mills' take on the fairy tale was his most fully realized story ballet since Hamlet 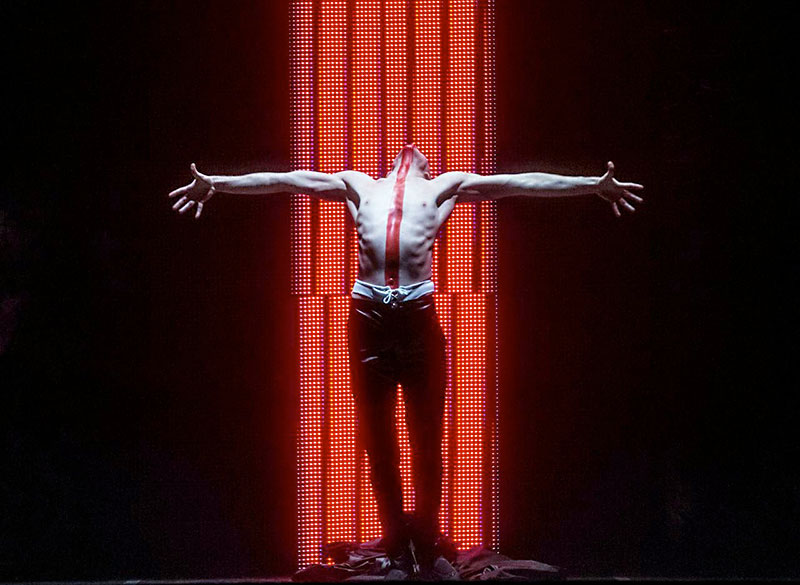 In most stories involving Beauty and the Beast, it isn't difficult to tell which is which. Beauty is typically feminine, the Beast masculine. Her features conform to some traditional ideal of human attractiveness; his are in some way inhuman, feral, grotesque. And that much applied to Ballet Austin's Belle Redux: A Tale of Beauty & the Beast, just remounted by the company for the first time since its 2015 premiere. Even without the fur and fangs of a literal representation of the name, the Beast in Artistic Director Stephen Mills' adaptation read as such: A thick scarlet stripe ran from the back of his shaved skull over the crown of his head and down the center of his face, throat, and bare torso – he was clearly Other. And Belle was all that her name signified: lovely, graceful, open. But once she and he met and felt that inexorable pull toward each other, those distinctions began to blur in unexpected ways. In dreams and before mirrors in the Beast's castle, Belle saw others marked with the same blood-red stripe as the Beast and saw herself marked with it, too. And she encountered a Beast who was unmarked, a man in white who appeared as good and virtuous as she had previously. Then at one point, all four – marked and unmarked – danced together. So which was in truth Beauty, which the Beast?

In that question, that mystery of identity and nature, lay the heart, magic, and brilliance of Mills' contemporary take on the tale. Rather than reiterating the standard narrative, wherein a young man's arrogance and cruelty brings upon him a curse broken only by the love of a young woman for him despite his monstrous form, Mills has played with the concept that we're all made up of light and shadow, good and evil, and thus each of us is both Beauty and Beast. It sacrificed the literal enchantment that we know from Disney and Jean Cocteau's wondrous 1946 film, but its message about love's power was every bit as potent and dramatic, perhaps more so since this telling calls on Belle to recognize her own shadow side and embrace it even as she embraces the Beast and his, which doesn't magically disappear. Both are flawed, both see their flaws, yet their love endures.

In its originality, execution, and fusion of story, movement, music, and design, Belle Redux may well be Mills' most fully realized story ballet since Hamlet, first adapted in 2000. As with that work, here Mills really gets the characters, on a deep metaphorical level, and it's freed him from dealing with them just in narrative terms. He was able to tell the story and expose its mythic underpinnings through movement and design elements that made bold symbolic and psychological statements. That scarlet stripe marking the Beast was like a bloody gash that split him in half and was made more unsettling by running across so much exposed flesh, which signaled at once raw physicality, sensuality, and vulnerability. When he and Belle first danced together – a tension-filled pas de deux fueled by a bass solo in which each thick pluck of a string sent a low, heavy note slamming against our chests – we felt danger, not from any physical threat by the Beast but from the attraction communicated by Jaime Lynn Witts' Belle and Edward Carr's Beast, an attraction more felt than understood. And when Carr literally upended Witts, spinning her body until her head was at his feet, Mills was showing us what was happening to her world.

The visuals approached the striking images of Cocteau's film, which Mills has said was an inspiration, along with work by the late fashion designer Alexander McQueen. The world created by Michael Raiford, who designed the sets and costumes, was one of midnight intensity and unease, the space framed by heavy black walls scarred by graffiti and gouges; characters ferried to the Beast's castle by men in dark hoodies; Belle's sisters as alike and spooky as the twins in The Shining, but grown up and affecting a Bettie Page look. The rich, atmospheric score by Graham Reynolds reinforced the perpetual sense of menace, and even the monumental columns of white light provided by designer Tony Tucci couldn't seem to brighten it.

It was up to Beauty and the Beast to provide the light here. And in the choreography provided by Mills and dance with exceptional skill and feeling by Witts and Carr, they did. In the closing duet, they established the persistence of the bond between their characters, a love that accepted the good and the bad, the fair and the rough, shining through it all and letting this couple whose life would not be a perfect fairy tale still live blazingly ever after.

Belle Redux: A Tale of Beauty & the Beast