At Gallery Shoal Creek, these artists' prints interact well with one another – contrasting peace in nature and urban agitation 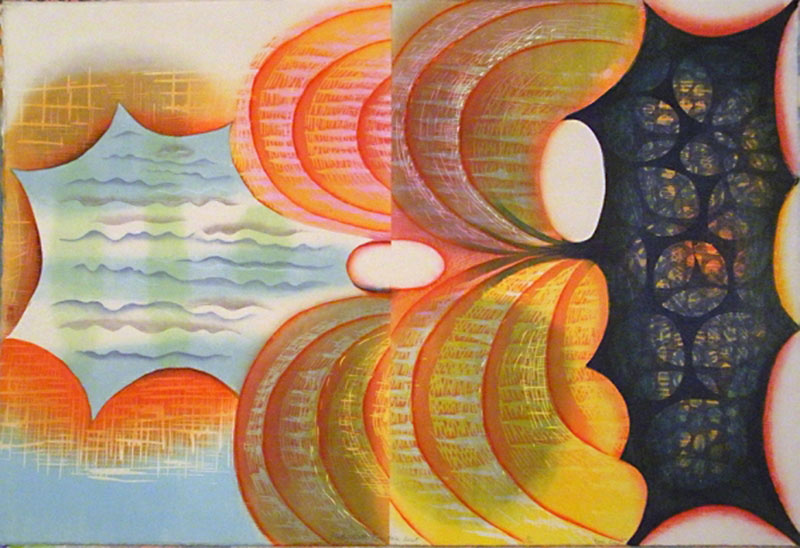 Karen Kunc's Flooding Field, Fountain Burst isn't an obvious illustration of anything. The undulating lines making the familiar arcs and points of stylized water are the only portion of the image that offer something concrete. This ambiguity turns out to be a strength. The color is rich with bright oranges and a variety of blues that culminate in organic, ethereal forms. A dark jewel, like a hive or an alien gem, takes up the right side of the image. It's scary, like something powerful and teeming with magic. It feeds the brightness in the rest of the image, its darkness seeping like tentacles from the hive and between the brilliant orange curves that act like a landscape confining the placid water at the image's left. The print is lush, reciting a discrete story that is just out of reach.

Kunc's Zig Zag and Weathered Lattice are monoprints and wield the same abstraction that Flooding Field does. The forms in Zig Zag are sharp, geometric, with crisscrossing lines and sharp points. The background features a pattern like a wood surface, concentric rings growing elegantly from their circular hearts. The wood surface is repeated in Weathered Lattice, though Weathered Lattice takes the reference further than Zig Zag. It is populated with simple treelike shapes, their arms reaching out and touching amid circular forms that float like cells or amoebas. Kunc applies real skill with line, color, and composition, so that the complicated collections of shapes, rather than calamitous, feel easy and readily placed, natural.

Kunc's prints interact well with the work of Monika Meler, her partner in the show. Meler's three tower prints, for example, refer to man-made architecture, but they are not overtly industrial or urban. The predominant color is a soft blue; the "towers" themselves are not the vertical monoliths we might expect. Instead, they are squat, like shuttlecocks. The show's text makes reference to the Chicago skyline. Having lived in Chicago, I can't say the softness of the tower pieces is too reminiscent of that city's force. That said, it would be foolish to impose my experience of Chicago onto Meler's. Anyway, upon reflection, I can recall rides on the El train into the Loop, contemplating the distant skyline, like a city on a cloud. Meler's work takes me there, and that is a gift.

Another piece, Cities and Structure, is more reflective of that city's angular hodgepodge. Small, straightedged forms repeat over the entire surface, creating a netting that is reminiscent of the thousands of windows one finds glowing on the faces of tall buildings, until the structure bursts in multiple planes, and in all directions, off the edge of the print's surface. It's the busiest moment in a busy city, a corner where you realize you're lost, harried, while all around is constant movement and endless buildings that are different but the same, just like the people. Neither Kunc's nor Meler's images have people in them, by the way. They're not needed. The references to nature in Kunc's work imply the peace and abundance of the world beyond our reach, while Meler's urban myths highlight the agitation and scale of the human endeavor, raised to the limits of our imaginations, and of our control. Our own species finds itself in the middle somewhere, too chaotic and clumsy to smoothly commune with nature; too vulnerable and small to manage our machines. In the end, we're reminded that something has to give, and that something could be ourselves.