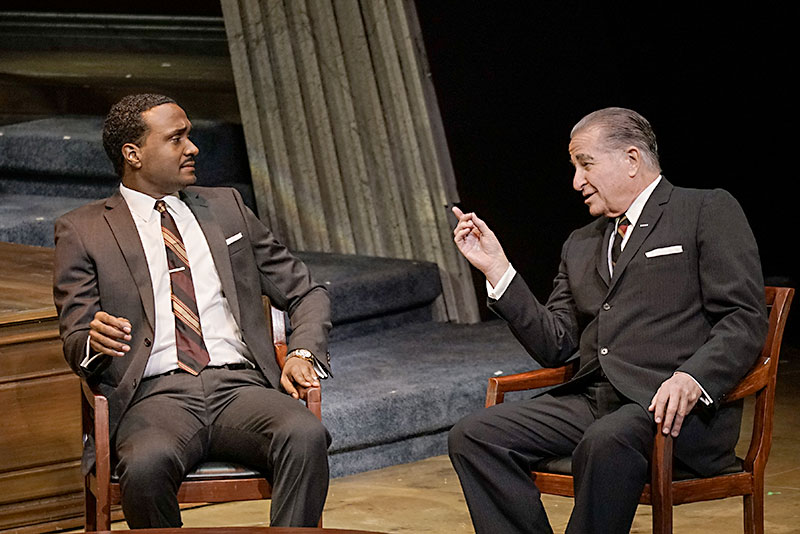 Theatre companies typically plan their seasons out well in advance, making decisions about their choice of plays, casting, and other aspects of production months before the shows actually open. That Zach Theatre's staging of The Great Society feels as timely as it does is a sign of both great foresight on the part of the company and its ability to shift this production in a very specific direction.

The play is about LBJ, starting with his victory in the 1964 election and running the course of that presidential term. Like its forerunner, the Tony Award-winning All the Way, which covered Johnson's first day as president through his election, it's a version of history, albeit one that's well-researched, and it's helpful to remember that the play is in many ways a fable with specific ideas we're meant to take away from it.

The first of three acts showcases the political skill of President Johnson (Steve Vino­vich) as he launches his cascade of social programs meant to attack poverty in America. Two small cracks appear in his administration. One is the conflict in Vietnam, to which LBJ's Secretary of Defense Robert McNamara (Miles Chick) recommends sending a small force, predicting that North Vietnam will soon negotiate and the conflict will fall into obscurity. LBJ follows the advice, lighting a long, long fuse that he can never bring himself to put out. The other is the struggle for civil rights under Martin Luther King Jr. (Cecil Wash­ing­ton Jr.), which undergoes some of its most famous episodes in this period and exposes what is at best a rocky partnership between King and Johnson.

The latter scenes are rendered powerfully here through the smart script by Robert Schenkkan and Zach's remarkable ensemble of actors. With such great collective work, one almost hates to elevate any performance above the others, but Michelle Alexander's voice in the several songs is a thing of beauty and power.

As the play moves forward, the parallels between then and now begin to appear. King leads a movement based on the urgent needs of his community and of the country, but key supporters of LBJ's presidency, such as Mayor Daley in Chicago (James Davies), are intent on resisting the tide of history. As with the Black Lives Matter movement, King will not and cannot stop pushing for change. When Nixon becomes the Republican nominee and promises "law and order," a dog whistle to whites who feel oppressed in the face of deepening unrest, it's clear that playwright Schenkkan wants to show that history repeats itself.

Does it? Is it doing so now? Who can say? On the evening this review was written, current events were unfolding so fast that any kind of immediate analysis seemed laughable. Maybe in six months or a year we'll be able to tell if the presidency after LBJ's and the present one are fair equivalents – should we still be here to wonder.

We know what happened in history, though. Spoiler alert: Nixon became president, and Johnson saw his vision for a Great Society doomed by reactionary forces on both the right and left. As painful as it may feel to be re-entering an era of corruption in the White House on par with Nixon's, what Schenkkan proposes in The Great Society is actually an optimistic vision: History may be cyclical, but someday the light will shine again.

The play concludes with a line and a gesture that clearly mark where Zach Artistic Director Dave Steakley and his company stand on the state of the union. Steakley typically seeks to connect theatre with the thoughts and feelings of this community, and that practice has met with varying success in the past. Here, however, with the remarkable ensemble work and the deliberate message with which the play concludes, he has presented one of his most powerful productions.

A version of this article appeared in print on February 3, 2017 with the headline: History Repeats