Austin Opera's The Daughter of the Regiment

Just as the young woman of the title is deemed "charming," so too is Donizetti's work in this company's staging 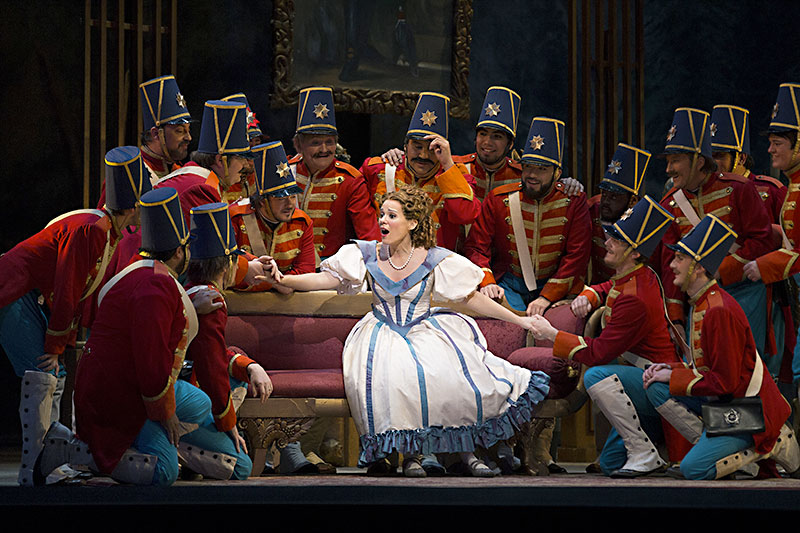 From the opening strains of the overture to Donizetti's comic romance The Daughter of the Regiment, you know things are not going to go as planned, no matter how careful the preparation. A sweet, romantic swoon of a melody competes with brash martial interruptions, and when the curtain flies up, we find out why: In the beautiful Tyrolean Alps, Napoleon's French fighters are on the march. Local peasants fret and pray. The Marquise de Birkenfeld is on the run, her overburdened butler Hortensio huffing and puffing in her wake. Whatever will they do?

Invading armies might be harbingers of doom; then again, these soldiers are French. And when you put French soldiers onstage, those same ferocious fighters usually turn into dashing and honorable men who like to engage in a good deal of fun – often with a tankard in hand. So it is with the 21st Regiment. And yet, this charming opera offers an even brighter touch: a young woman, Marie, the regiment's foundling "daughter," whom its members have raised as one of their own. She's as swashbuckly as the guys, except now she's fallen in love. The subject of her affection is Tonio, a local peasant who saved her life. No sooner does she mention his name than in he's dragged, captured by her father-figure fighters as he risked his life searching for her, the girl of his dreams.

The rest of the opera, like the overture, bounces back and forth between Marie and Tonio's sweet romance and the martial interruptions of parental types (mostly the regiment's leader Sulpice and the aforementioned Marquise) as they try to define the kids' futures, with the kids doing their best to forge a future of their own. Allegiances are swapped, uniforms are traded for the trappings of nobility, and outdoors becomes indoors as we move from mountains to drawing room. It ends well.

Holding it all together is wonderful music, delightfully performed by the Austin Opera orchestra under the baton of Richard Buckley and robustly sung by all. Donizetti set some particular challenges to his tenor, and René Barbera in the role of Tonio delivers brilliantly. Barbera gives the impression that his singing is effortless, his "Ah! mes amis," an aria noted as one of the toughest in the repertory, is fluid and passionate.

A perfect counterpart to Barbera's peasant lover is soprano Rachele Gilmore as Marie. At times impish, fierce, tender, even goofy, Gilmore brings the regimental daughter to life, an energetic young woman ready for (almost) anything. Her singing is exquisite, particularly when she bids "adieu" to her patron platoon in the moving "Il faut partir," before being whisked away from a world of epaulettes and men to the restrictive salons of etiquette and a puffy white dress.

Once the story heads indoors, this production undergoes a shift toward broad comedy. The opening of the second act features a ballet of manners, as poor Marie is put through her paces in order to smooth the rough edges of a girl who's grown up among soldiers. The trio that follows is loads of fun, as the increasingly fraught Marquise attempts to teach the girl to sing properly, despite Sulpice's not-so-subtle melodic interjections of the 21st Regiment's fight song, "Rataplan." Mezzo-soprano Cindy Sadler and bass-baritone Stefano de Peppo know their way around occasionally oversize characters, creating well-rounded, memorable ones whether singing or speaking. Sadler's vapors-prone Marquise evolves into a redoubtable matriarch, and de Peppo's Sulpice shifts with ease between a leader of men and the tender father to the orphan Marie.

When the nobility arrives to inspect Marie, they scoff, but the girl wins them over singing "Quand le destin, au milieu" – she will loyally accept her fate. How "charming" she is, they exclaim, and indeed this opera, sung in French with dialogue in English, is about as charming and easy an entrée to the world of opera as you could want. Vive l'amour!

The Daughter of the Regiment