"Jim Roche: Some Americans Feel Like This" at Bale Creek Allen Gallery

The show's hand-stenciled, colorful re-creations of political signs are a timely vessel for America's honesty 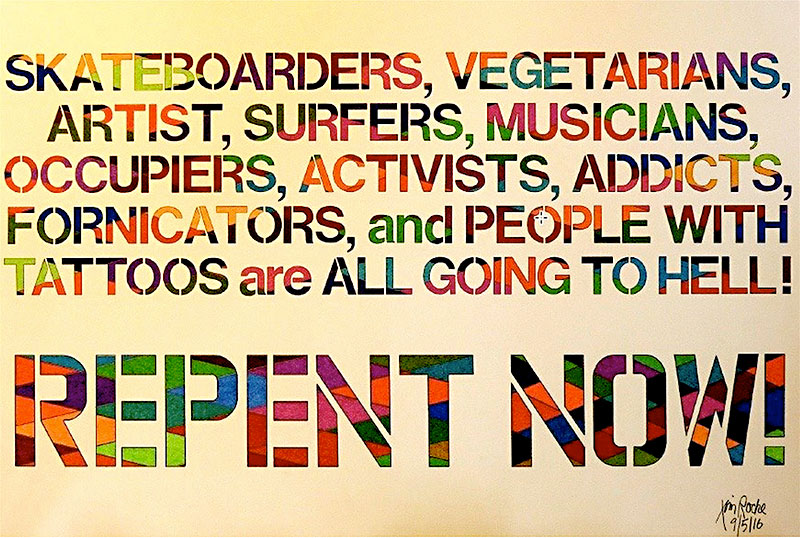 The signs in Jim Roche's "Some Americans Feel Like This" recall outsider art, though Roche himself is not an outsider artist. He has been making and showing work for a half century or so, including at the Whitney Museum and Venice Biennale. Be that as it may, his work harnesses the madness and the ephemeral quality that I often associate with outsider art, an untrained riskiness that is willing to go places that most mainstream artists might scoff at, if they deign to notice at all. Roche's focus here is the religious and political missive, text first gathered from various church marquees and colloquial broadsides, then neatly hand-stenciled by the artist in vibrant, multi-colored fonts. I've made my share of long drives, and typically I come across at least one handmade sign, attached to a barbed wire fence or leaning against a tree, describing, in a rambling and pointed way, how I can avoid damnation, or maligning me toward a particular political perspective. Often the signs, scrawled in dripping black or white paint, are far too long to be read as I drive by at 80 miles an hour, and even if they could, the more verbose ones lose their way into tongues after only a few words. Roche's signs usually make their points clear, but they veer into bonkers territory as well. That's where the fun starts. One example states: "SKATEBOARDERS, VEGETARIANS, ARTIST [sic], SURFERS, MUSICIANS, OCCUPIERS, ACTIVISTS, ADDICTS, FORNICATORS, and PEOPLE WITH TATTOOS are ALL GOING TO HELL! REPENT NOW!" All right, person, I don't believe in hell, though I see what you're getting at. But tattoos? Skateboarders? It's so specific that it makes me wonder if he's talking about someone he knows.

The show covers three large walls dedicated to Hillary Clinton, Jesus, and Donald Trump, respectively, icons upon whom everyone seems to have an opinion. Roche doesn't discriminate. The above sample belongs to the Jesus wall. "MAN SEEKS FEMALE, WHO DOES WHAT SHES TOLD, AND DON'T MIND BEING SLAPPED AROUND IF NEEDED" is among the signs belonging to the Trump wall, and "HUNGRY ANTS WILL START WAR TO GET DEAD SOLDIERS FOR FOOD. WILL MANKIND FOLLOW THEIR LEAD WHEN THE TIME COMES?" is one of the seven on the Clinton wall. What that particular sentiment has to do with Clinton, I cannot say, but one of the joys of such signage is the yawning gap between the lucid and the crazy. I don't need or want the signs to be easily understood.

I was with the 40,000 or so marching after Inauguration Day. One of the best ways to pass the time during the march (aside from bashfully chanting) was admiring the myriad incredible signs people handmade for the occasion. I noted commentary about the signs at marches nationwide, so many of them accurately, angrily, and humorously addressing the complex and disturbing nature of our current national politics. In Washington, D.C., marchers left their accumulated signs at the Trump Hotel, like a poster-board mic drop. On a more somber note, the gesture also suggests a memorial, the kind where people leave notes and flowers at a space where something tragic has happened. Those mementos typify the ephemerality I mentioned above, something meaningful that is not meant to last. Roche has repurposed political signs, some with ugly messages, into rather beautiful, precisely handled artworks that commemorate and contain them at their wackiest and at their most dangerous. The result is a timely vessel for America's honesty, the type we usually pass on a highway from here to there, and without a second thought.