This concert of works by Brahms, Smetana, and Fujiwara contrasted autobiographical stories told within music by young composers and mature ones 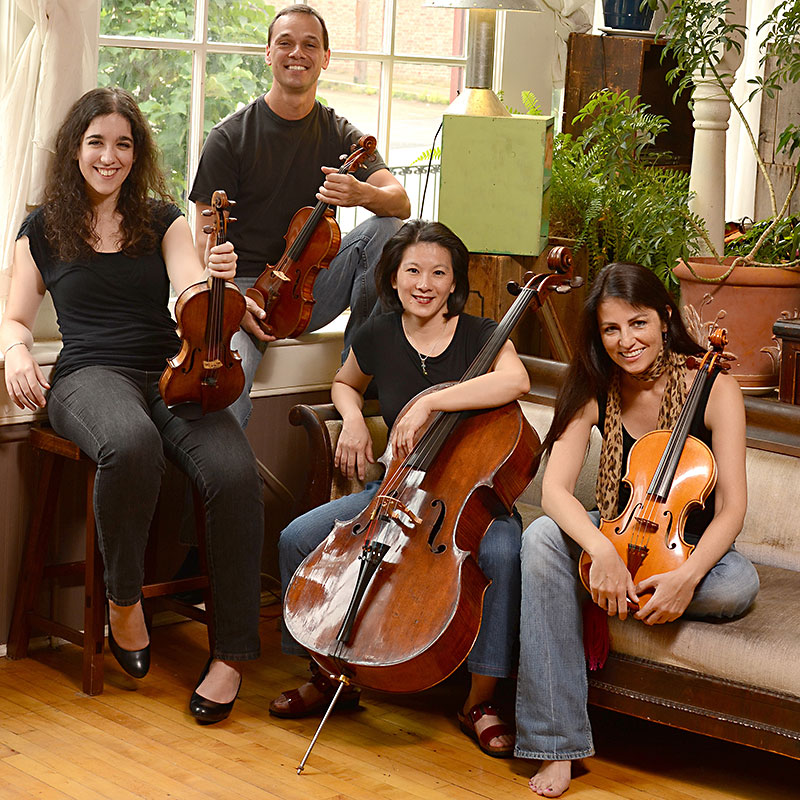 All art is connected to the moment in which it is conceived. Yet a composer's work also lives beyond its moment on the timeline, especially when that work is created with the intention of telling the composer's story. This is the autobiographical element at play. Contrast the young artist searching for his unique sound with the mature artist at the height of her powers, creating works that have been honed by a lifetime of making music.

This was the premise of the Austin Chamber Music Center's My Life, a concert highlighting autobiographical works by three composers: the 19th century's Bedrich Smetana and Johannes Brahms and a 21st century work by Korine Fujiwara, violist for Carpe Diem String Quartet, which performed the night's selections.

Smetana was explicit with the autobiographical nature of his work, naming his String Quartet in E Minor "From My Life," the four movements tracing his musical journey from youthful discoveries and struggles, through his time working in dance halls and less reputable rooms, through true love to the greatest challenge a composer can confront: the loss of his hearing.

Brahms' Piano Quartet in G Minor, Op. 25 is less self-consciously autobiographical, but ACMC Artistic Director and pianist Michelle Schumann, who performed the work alongside Carpe Diem, made a good argument that the range of styles and moods Brahms stuffed into the piece showed a still-young composer seeking his voice under the enormous pressure of having been hailed as Beethoven's creative successor. This work ran the musicians through a musical ringer, featuring energetic gypsy and folk sounds, a prototype for a future symphony, rolling and tender sections of a love song, a march, and more.

Brahms used his quartet to test and explore his range, with cohesion sustained through the piece's stateliness and formality, conjuring images of grand ballrooms, marble floors, chandeliers, and polished silver. Even his virtuoso, gypsy-inspired fancies held a certain gravitas beneath the rollicking rondo. Smetana's work, on the other hand, painted pictures of wooden tables, overflowing tankards, rough-hewn floors, candlelight, and old brass – an overall warmth to Brahms' cool.

The duality of temperatures and the multitudinous styles on display in this pair of 19th century works allowed Carpe Diem's members to explore their own range, their playing infused with panache, elegance, and heart. They performed on their feet (cellist Carol Ou notwithstanding), moving to the music, connecting with each other in ways that highlighted their onstage camaraderie and lent the night a pleasant informality. This was enthusiastically embraced by the audience, one member of which, after a particularly energetic movement came to a delicious, sudden stop, couldn't help himself and let out an "Oh, yeah!" to the delight of everyone in the hall.

That joyful outburst was in response to the evening's middle selection, Fujiwara's Fiddle Suite: Montana, which she composed in 2009. The five-movement autobiographical work is a musical description of Fujiwara's growing up in that vast, remote, western state. The first movement was a different Western swing to what we know in Texas, recalling instead the open range way up north through slurring, dragging fiddle strokes, and a melodic beat that brought to mind lonesome herders on horseback.

The second movement offered a toe-tapping, hoedown feel ("Oh, yeah!"); the third was based on a child's song to accompany splashing in puddles, with a plucked cello leading to more of those wide-open sounds of the great northern plain. The fourth and fifth movements honored Fujiwara's ancestry: one tranquil, pretty, then full and reassuring, a memory of her Japanese immigrant grandfather; the other a family gathering's all-out fiddle-fest that included a tempo shift thrown down as a challenge and ably taken up by four talented musicians.