The Polish artist's industrial-material sculptures at the Contemporary Austin capture the physicality of our society, the rigidity of our order 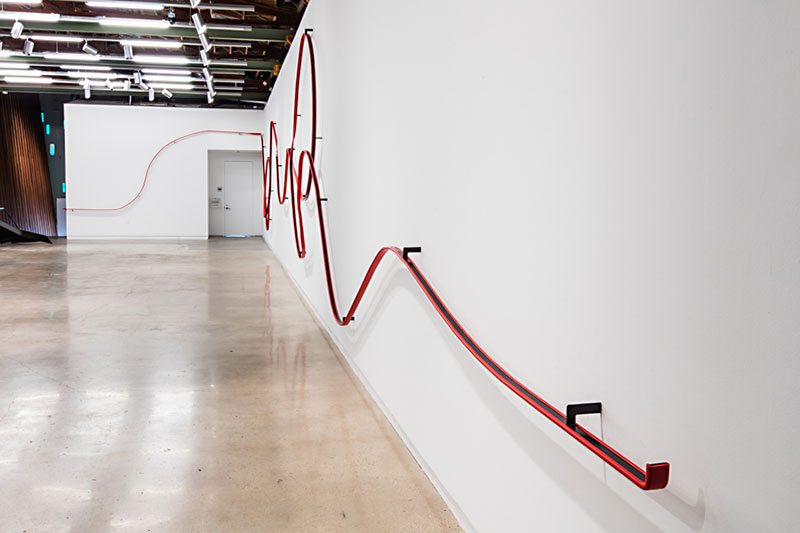 Monika Sosnowska's Habitat references Soviet-era Warsaw, including the brutality, boredom, and hardness of its architecture and urban features forged from concrete and steel. I can't speak to that specific time and place, but there's no need, because the brutality she refers to is here in Austin, as well as most any other urban landscape. Sosnowska's Rubble, a dangling bramble of black painted steel wires intertwining with intermittent cocoons of concrete, calls to mind something in Downtown Austin, maybe on a construction site, or possibly something torn up in a storm, the kind of stuff we might see if/when an apocalyptic tornado comes ripping through town, or if/when we were to ever have a serious earthquake.

The same can be said of one of my favorites in the show, which happens to be Untitled, a spider-like amalgam of shining stainless steel connecting at angles and punctuated with hulking chunks of concrete. Whenever I lock my bike to a post, like a bus stop sign or parking meter, I always tug on the thing to make sure it's secure. What I imagine is some thief coming along and kicking the post over and making away with my bike, leaving a divot in the dirt and a bee's nest of upended concrete poking into the sky. Untitled has that kind of resonance, like something gone wrong in the city. Only it didn't go wrong. In Sosnowska's Warsaw, and in our own city, that skeletal industrialization, the uniformity of bland bureaucracy and keep-it-togetherness, is purposeful. It's the physicality of our society, the rigidity of our order. Not that I can think of a better way to design a city. Maybe a hobbit village or a civilization in the trees like out of Avatar. Something nurturing and safe, and altogether unreasonable.

Sosnowska's sculptures are lovely to look at, like large-scale pottery, finely tuned and pretty, if also unflinching, like their subject matter. Entering the second floor of the gallery gave me the feeling of reaching a precipice I didn't know was there, like I'd come across something grand and unexpected, an immense cave mouth. Her three mammoth installations, Handrail, Façade, and Stairs, seem to make the space bigger with their scale and fluidity. It's an impressive drama, a badass extension of her poetic, machinic touch. Handrail, in particular, streaming the length and breadth of a long wall like the scrawl of a god, is hypnotic – a brilliant red, so brilliant one forgets the mundanity of its source material: "cheap plastic-covered steel banisters from the 1970s."

Sosnowska does an incredible job of delivering the sick punch line with Antechamber, a gallery-sized maze of walls decorated with a gentle floral design calling someone's grandma to mind. Only the maze is truly angular, so that even in a relatively small gallery, it's easy to get lost. Corners disappear into the distance, walls pop out of walls like a fun house. You enter a doorway and find yourself in a small chamber alone with one of Sosnowska's elegant, sonic masterpieces, and you realize that the beautifully floral walls have been a sham. On their exposed sides are the beams and builders' graffiti that speak to the true nature of the structure, i.e., the Structure, our Structure, the one we pass our lives in, hold elections to govern, and make laws to keep to. I can't tell, and maybe Sosnowska can't either, whether the Structure is human extremity or industrial extremity, but the easy answer may be that it's both. Regardless, the concrete jungle, familiar as it is, remains terrifying.