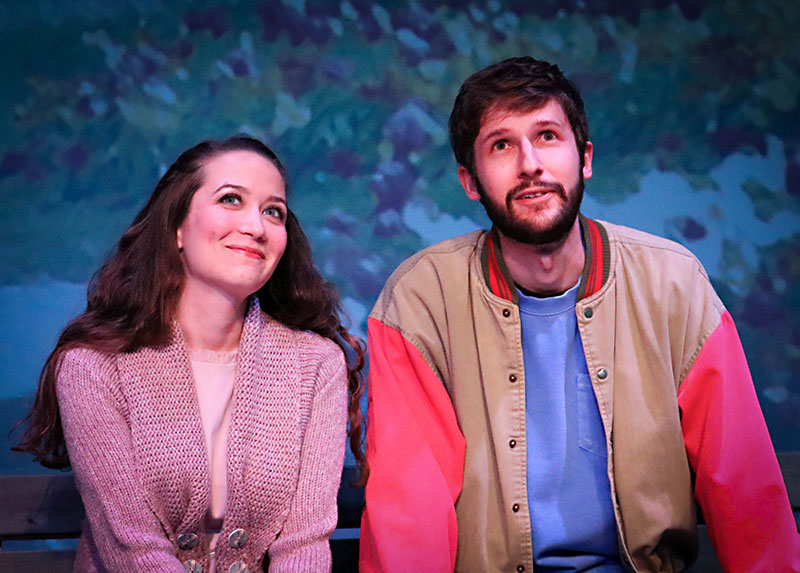 What might be, what might have been: Claire Grasso (l) and Aaron Johnson in Bloomsday (Courtesy of Austin Playhouse)

Thirty-five years ago, a young man from Seattle joins a walking tour of Dublin that visits key sites in James Joyce's masterpiece Ulysses. Robbie (Aaron Johnson) and the tour guide Caithleen (Claire Grasso) hit it off, and not just in any casual sense. They spend several hours together in an intense, tumultuous courtship before separating, and the encounter's consequences follow them through the years.

In this script from Austin playwright Steven Dietz, the pair return 35 years later to the pub where they last saw each other, and they confront the events of the years that have passed. The story of the surreal day that they spent in each other's company is spun out through conversations between the older and younger selves. As older adults, Robert (Huck Huckaby) and Cait (Cyndi Williams) speak to Robbie and Caithleen in a halfhearted attempt to make them change course, but the conversations are less about literal time travel and more about the internal, imagined lives of two disappointed people.

Bloomsday itself is the annual June 16 celebration of the events in Ulysses, when people gather in pubs and bars worldwide to celebrate the novel and the author. As a reviewer, I claim no expertise in Joyce's work; how much that matters in the viewing of the play is subjective. Joyce's famous stream-of-consciousness passages do appear to inform Dietz's play, but the story is really the story of Robbie and Caithleen, both now and through the years.

The success of the play hinges on how much one believes in the original encounter between Caithleen and Robbie. Is this meeting really so earthshaking that it changes their lives forever? Dietz has set himself and the company a big challenge in depicting the kind of powerful attraction that remains vital over three-and-a-half decades. Is what passes between the young lovers enough to make her pack her bags and leave behind everything for him? Is it enough to frighten him into not finding her waiting for him? It's made more difficult to believe when it's shown that Caithleen feels herself slipping between present and future, terrified of the encroaching mental illness which claimed her mother. Robbie emerges, or rather fails to emerge, as her hero.

All four actors are cast well, and they each hit their marks. Yet ultimately, under Don Toner's direction, the production lacks the kind of vivid passion that Robbie and Caithleen's encounter requires. Much of it is due to the intellectual energy required for the audience to continue buying into what is from the beginning an uneven relationship between characters: passionate, unstable Caithleen and spooked, uncertain Robbie. Moments of elevated feeling arrive without enough progression. This is a play that's reaching toward great heights and a production that only rises so far.