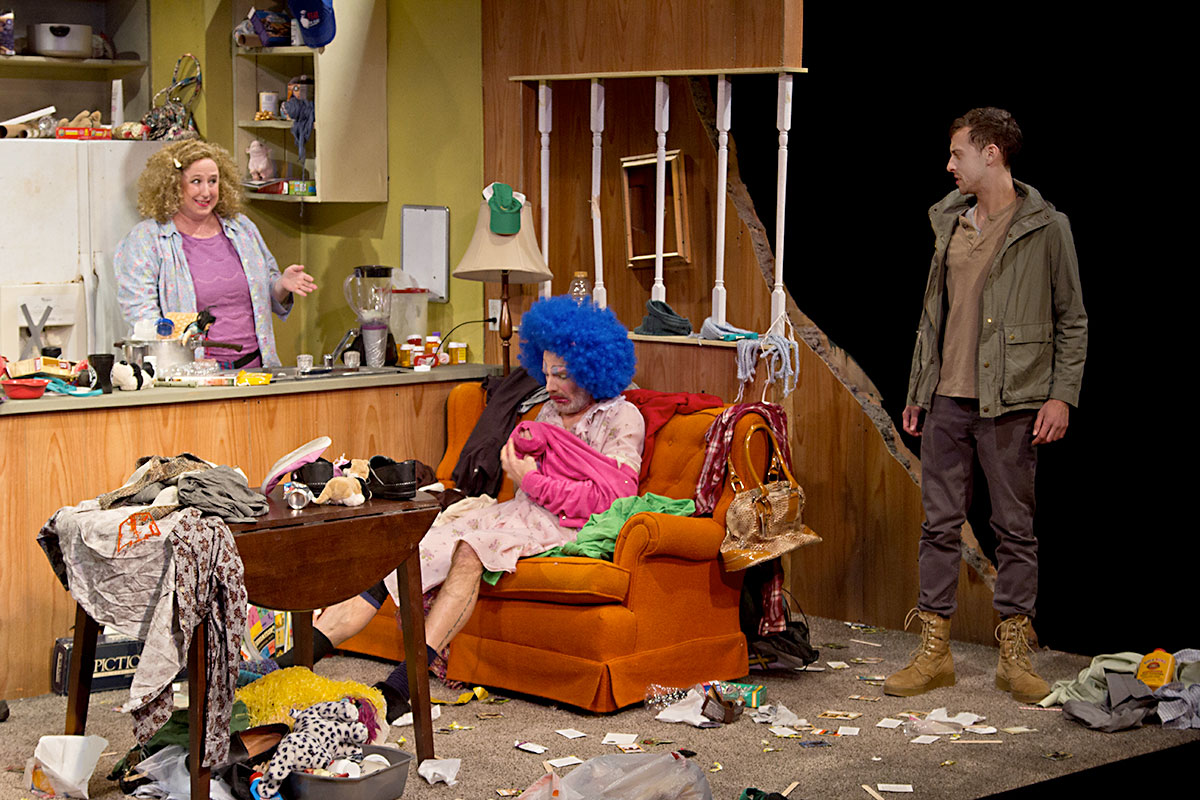 Isaac thought he was leaving the war zone when he made it home from his three-year tour of duty in Afghanistan, but it turns out the young Marine on mortuary detail was just trading one battlefront for another. The instant he steps inside his family's old, worn suburban bungalow and gets a look at its current state – a cunning reveal in Capital T Theatre's staging, as the whole house rotates from exterior view to interior – Isaac is met with chaos: a living room and kitchen so trashed-out that it looks like it was raided by a marauding army. In fact, it's ground zero in the ages-old conflict between his father and mother, with Mom having recently gained the upper hand after Dad suffered a debilitating stroke. Now that overbearing, abusive Arnold can no longer badger Paige into keeping the place spick and span, she has decided the new order will be no order and demanded that dirty laundry and refuse be left where it falls, making a massive mess. And she's exacting extra payback on her macho-macho man by keeping him in diapers and a nightgown, covering his face with garish makeup, and slipping estrogen into his milkshakes.

And so with Hir, playwright Taylor Mac sets up housekeeping in the darkly absurdist suburbia where Edward Albee, Sam Shepard, Christopher Durang, and Nicky Silver have all been neighbors. As in some of those writers' signature works, this one concerns an American family whose dysfunctionalities are pushed to extremes that career between the comic and horrific, and it doesn't require much effort to see in this clan the fragmented, fractious state of the union. Husband and wife are at each other's throats just like our political parties; the order that once guided family life has broken apart much as social institutions have; siblings are at odds and struggle to find direction beyond the old societal norms. That tightly bonded nuclear family of postwar sitcoms is revealed to be as split as an atom in a hydrogen bomb, with the result being every bit as explosive.

As Isaac, Nate Jackson reacts to the drastic alteration to his home and to his father's condition as if a shell has gone off. He's stunned, and his impulse is to fight back, to clean his father's face and pick up the trash. The intensity with which Jackson describes picking up parts of bodies during his time at war make clear that his Isaac desperately needs wholeness in his life, and for him that means having a home just like it was before he left. But his mother just as desperately needs relief from that ordered life, in which she was belittled and little more than a slave. And as Paige, Roxy Becker projects a severe resolve to Stand Her Ground. Thus, Cap T's Hir largely comes down to a battle of wills between Becker's Paige and Jackson's Isaac, with the latter fighting to restore the past and the former fighting for an unconventional future.

That future includes – you might say is even embodied by – Max, Isaac's sibling who was previously known as Maxine. Max's new identity, with its attendant pronouns "ze" and "hir," promises a way forward free of the domineering patriarchy represented by Arnold, a world of cultural outings on Saturdays and dirty dishes in the sink. Alas, while Max is clearly enthusiastic about hir own new life – with Dillon Yruegas giving the character an eagerness almost on par with a puppy's – hir feelings about hir mother's vision are almost as ambivalent as Max's feelings about the banjo. Which makes Max not the strongest of allies in Paige's cause.

The stroke-enfeebled Arnold wouldn't seem the strongest of allies either; he's a jagged shard of the manly brute he was, with sharp-edged bits of memories powering the fraction of physical power left to him. And yet, to watch Jay Byrd crawl across the cluttered floor, wave his stroke-splayed fingers, struggle to plug in a TV cord, fight with his mouth to form a single word, and curl his long frame into the cardboard box where Arnold sleeps, is to see a figure who, however diminished he may be, moves with purpose. It adds to Arnold's humanity, but it also makes his humiliation more disturbing.

Hir certainly fits in the mold of dark comedy with which Capital T has forged its reputation. But where it falls on the spectrum of "dark" to "comedy" may vary with the viewer. The director, Delanté G. Keys, has his actors play it straight in this absurdist environment and fight for very high stakes, which is as it should be. But it may have eclipsed some of Hir's comic brightness and given this battleground more bits and pieces of shattered bodies than it usually has.

The Off Center, 2211 Hidalgo
www.capitalt.org
Through Jan. 22
Running time: 2 hr., 10 min.
A version of this article appeared in print on January 13, 2017 with the headline: Casualties of War