"Valerie Fowler: Nature and Other Stories" at the Butridge Gallery

The art here tells local stories but is universal in ways that are loud, strange, and reverent for uncontrolled nature 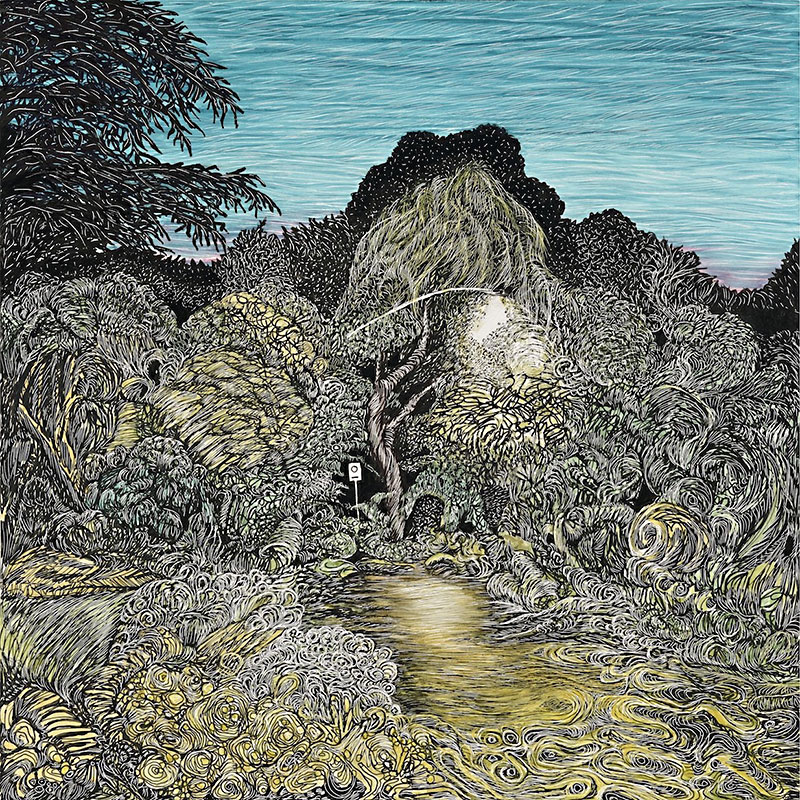 Valerie Fowler will give an artist’s talk on “Nature and Other Stories” Wed., Jan. 4, 7-8pm, at the Butridge Gallery.

I'm used to seeing images of Austin. Most of them are straightforward, really wanting to be pretty and recognizable – the kind of stuff you find in a souvenir shop. I don't have any particular issue with that. Sometimes all you really need is a coaster with the Capitol building on it.

That said, I've seen so much of that kind of work that when I see something special, something that really rings true, it calls to me. This is the case with Valerie Fowler's watercolor and ink drawings of Austin neighborhoods. A great example is End of the Street, a swirling illustration of an overgrown path with a single street sign dwarfed by the reaching, swelling trees and shrubs all around it. It's one of those familiar Austin dead ends, the kind that abound in neighborhoods all around the city, leading into a darkness beyond, a space that may be foreboding for some, but is oh-so-tempting for others. Having been a teenager here, I had my share of moments breaking the barrier between suburbia and wildness to wander in the nighttime smoking cigarettes and pot, batting cobwebs away, and making jokes about the Evil Dead coming to get us. The image calls multiple styles to mind. It's a little van Gogh, a little Where the Wild Things Are, and a little Micael Priest or even R. Crumb: sketchy, colorful, a bit creepy, and beautiful.

End of the Street is small, but some of her paintings, like Earth Has a Long Memory, Dedicated to the Lost Pines of Bastrop County, are large. Earth Has a Long Memory has the dreamlike, hallucinogenic look of End of the Street, only the oil paint and the size of the canvas seem to allow a freedom for boldness that the smaller images do not. The subject is the Lost Pines Forest in Bastrop County, which was devastated by a tremendous wildfire in the fall of 2011. I drove through a few months ago, and even now the area is haunting – terrifying, really – for what it suggests of the destruction that took place there. Acres of blackened tree trunks rise from the Earth like dead hands. According to Fowler, she was inspired to make her painting because of a single tree she saw struggling to survive there. It is a story that would be tempting to tell in a somber way, lots of grays and morbid references to death, etc., but the painting doesn't strike me as morbid or depressing at all. The living tree is bright with orange leafage and surrounded by sweeping green grass. Fowler does us the favor of painting its roots, also orange, organic and shimmering like precious stones in the soil. In the distance is a blue sky. The scene is somewhat cartoonish but inviting, an optimistic look at the persistence of living things in the wake of tragedy. On top of this, as with End of the Street, this painting tells a local story without overdoing the "localness" of it. It just needs to be, which makes it universal and easy to admire on its own merit.

"Nature and Other Stories" is a big show spanning multiple topics, most of which are set in the Austin area. Each work has a knowing whimsy to it, but it is never naive. It's loud, strange, and reverent for the uncontrollable beauties of nature. I want to give in to cynicism, but Fowler won't let me. Her work is too smart, too vibrant, and too honest for that.

"Valerie Fowler: Nature and Other Stories"