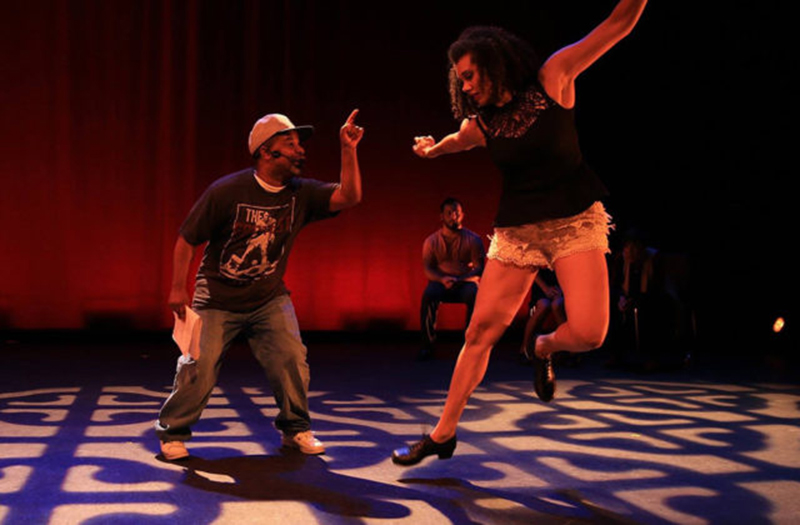 1) ZELL MILLER III In a year when extraordinary tensions made America's political landscape a battleground, no local theatre artist took to the front lines as often or urgently as Zell Miller III. In show after show, this writer/performer/director gave searing critiques of social injustice in blazing language and a hip-hop beat that matched his impassioned heart's. Whether he spoke (Tapestry's One Step at a Time) or let others be his voice (Ballot Eats the Bullet), this indispensable artist, activist, and mentor was our conscience and our call to action.

3) CLYBOURNE PARK (Penfold Theatre) The nuances of Bruce Norris' time-jumping conversation about race in America might've been blunted without this cast's sensitive acting and sterling ensemble work, directed by Nathan Jerkins. But every line and look brought home the wrenching difficulty of dealing with black-white relations, then and now.

4) LUNGS (Hyde Park Theatre) The tiny venue on 43rd has rarely felt more intimate than while eavesdropping on the couple in Duncan Macmillan's two-hander. With actors Michael Joplin and Liz Beckham literally in our midst (thanks, director Lily Wolff) and both being so emotionally open and vulnerable, we felt close to them in every way.

6) SHE LOVES ME (Mary Moody Northen Theatre) Director Nick Mayo understood all the charms of this modest Bock & Harnick musical, and he lovingly drew them out with the aid of a splendid production team and a vivacious cast that made the mundane joys and sorrows of shop clerks in Budapest the stuff of irrepressible, irresistible romance.

8) THE HOTEL VANYA, OR A METAPHYSICAL- PARADIGM AT THE END OF EVERYTHING- NESS (Natalie George Productions) In Timothy Braun's meta riff, Chekhov's yearning, weary Russians fit in a modern Austin beset by aggressive growth almost too well; their sense of an era ending synced with ours. But the show's bracing theatricality cut through the existential gloom.

10) SONG ABOUT HIMSELF (Capital T Theatre) The reunion of writer Mickle Maher with Katherine Catmull, Jason Phelps, and Ken Webster made this Twilight Zone-like tale of a search for connection and identity in the wastes of the Web sing like a Whitman ode.

11) ALICE IN WONDERLAND/CHARLOTTE'S WEB (Zach Theatre)/THE STEADFAST TIN SOLDIER (Summer Stock Austin) All I really need to know about friendship, sacrifice, and death I learned from these great shows. More proof that in Austin, theatre for the young can be just as theatrically inventive, intelligent, and moving as theatre for adults. And a major force for that is Allen Robertson.

NOTES ON THE CLASSIFICATION OF SPECTRAL LINES, ... (Catastrophe Theory Arts)