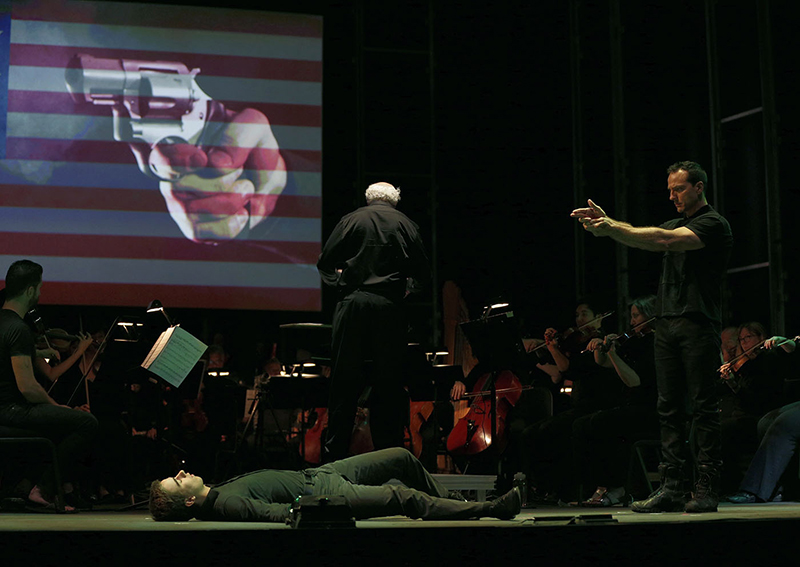 1) THE MANCHURIAN CANDIDATE (Austin Opera) The gamble of mounting a new opera based on a tale of Cold War paranoia paid off richly when this thriller proved gripping from the first note. Every element, every moment worked – Kevin Puts' moody score; Richard Buckley's intense conducting; Alison Moritz's taut staging; Greg Emetaz's projections; all the performers – heightening the tension 'til my shoulders were hunched around my ears.

2) COMPASSION (Austin Symphony with Lior) Hearing this little-known song cycle by Nigel Westlake and Lior Attar made clear why ASO's Peter Bay was moved to bring it to Austin: its power and timeliness, beseeching us all to open our hearts to one another now.

3) MOZART REQUIEM UNDEAD (Panoramic Voices/Golden Hornet/Convergence) The much-anticipated return of this contemporary spin on Wolfgang Amadeus' Requiem was as thrilling as at its Fusebox Festival debut, with the bonus that in Bass Concert Hall, the softer movements could be heard and relished.

4) ONE STEP AT A TIME: A JOURNEY TOWARD PRESENT GRACE (Tapestry Dance Company) A necessary work in this election year, spotlighting the troupe's dancers – their diversity, histories, and hopes – in ways that gave their artful steps personal and political context, especially when embellished by Zell Miller III's urgent, trenchant spoken word.

5) "THOUGH THE EARTH GIVES WAY" (Ballet Austin) The middle work in BA's The Graham Reynolds Project pulled us into a cell-like space where Stephen Mills had six dancers move to Reynolds' percussive score in ways that were provocative, incredibly fluid, and athletic to the point of astonishment.

6) THE ILLUSORY IMPRESSIONS PROJECT (Catherine Davis & Michelle Thompson Ulerich) Wandering about a West Campus mansion, seeing and revisiting five original dance/music collaborations set in different rooms made this a movable feast, where you felt closer to, and looked deeper into, the art.

7) THE RITE OF SPRING (Dark Circles Contemporary Dance) One hardly expects to hear Stravinsky's classic score played at a Fifties prom, but that inspired move let this dynamic Dallas troupe show just how tribal, carnal, and unsettling a high school dance can be, even in the starchy Eisenhower era.

8) RADIANCE (Blue Lapis Light) With wires strung across the Long Center columns, Sally Jacques turned the Terrace into a giant stringed instrument, played by aerial dancers in daredevil swoops and bounds. It was a vision of angels playing the harps of a deity.

9) "IN THE FACE OF TROUBLE" (Austin Chamber Music Center) With electronics, improvisation, and a lotta reverb, this commission by Graham Reynolds was a bold departure for ACMC, but thanks to Michelle Schumann's keyboard artistry, it enthralled.

10) RIVERSIDE (Jennifer Sherburn) The prelude to this choreographer's 11 dances in 11 months was a bit of backyard enchantment in Tarrytown, with dancers as naiads cavorting around and in a swimming pool.

A version of this article appeared in print on December 30, 2016 with the headline: Top 10 Classical Music/Dance Treasures of 2016