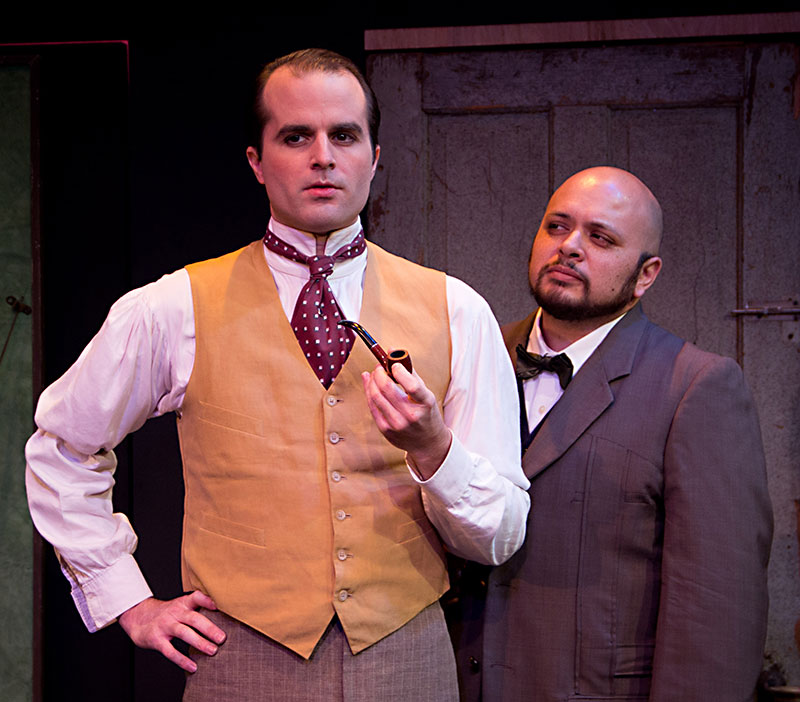 Abandoned malls are full of mysteries, especially at twilight. Familiar logos cast shadows over deserted storefronts, their merchandise moved out, their long-forgotten fixtures all akimbo along the floor.

As I descended on the escalator toward Austin Playhouse's performance space in the remains of Highland Mall, I couldn't help but notice that, despite my gloomy surroundings, three tall trees were growing on the lower level of the building. Green-leaved and robust, they stretched their branches ever toward the skylight, undeterred by the absence of life and light around them. Curious, indeed.

Adding to the odd atmosphere was Austin Playhouse's storefront, which was the only other sign of life in the building. In the midst of the darkened hallways, light and sound and people seemed to miraculously spill from the theatre. I was intrigued. The overall effect certainly set the tone for a Sherlock Holmes mystery.

Baskerville is Ken Ludwig's slapstick-heavy adaptation of the legendary sleuth's most notorious caper, during which five actors play fifty different people. This is especially impressive considering that Holmes and Dr. Watson play only themselves, burdening the remaining three actors with the mind-melting challenge of splitting 48 roles among them.

During the course of the show (directed by Don Toner), Marie Rose Fahlgren, Zac Thomas, and Stephen Mercantel divvy up a dizzying array of kooky characters that straight men Holmes and Watson (Jason Newman and J. Ben Wolfe, respectively) must wade through in order to debunk a dark legend and uncover a killer.

After the actors took their bows, I walked out of the theatre and back through the desolate building, where again I saw those trees. The space was the furthest thing from a garden, and yet, there they were, surviving – no, thriving against all odds. And on the drive home, the thought popped into my head that the Austin theatre community has a lot in common with those trees. We may lose our spaces. We may not get the funding or the paycheck or the recognition we need. And yet, time and time again, Austin artists still find a way.

Thank you for every late night at rehearsal. Thank you for pushing through your day jobs so that you can do the work that truly nourishes you. Thank you for hanging every light, for recording every sound cue, for building every set, blocking every scene, memorizing each line, and managing every stage. But most of all, thank you for not ever giving up, especially in these uncertain times. The work you do is not just valuable, it's necessary. Thank you, Austin artists. Y'all constantly inspire me, and I am proud to be counted among you.

May our roots run deep, and may nothing ever stop us from growing.