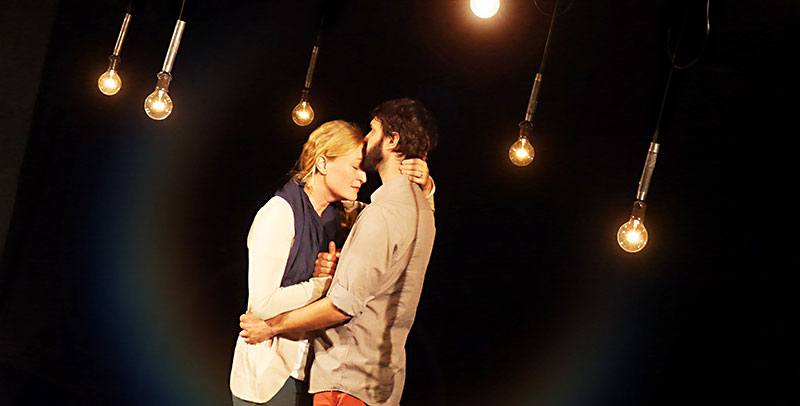 The story of Constellations is simple, for all that it includes astrophysics as one of its motifs. Marianne and Roland meet at a party and fall in love. They break up after one of them cheats, but they get back together again and eventually they face tragedy, together as a couple.

It's the way the Nick Payne script tells the story that makes it complex. At every juncture, we see the same encounter played out at least a half-dozen different ways. Marianne and Roland make one choice or another, and their lives dramatically change course. The play maps these choices to one particular conclusion, but it's apparent that any number of possibilities might have played out. This is just the one we're seeing.

Really, it's about how the choices we make steer our lives. Constellations makes use of quantum multiverse theory as a neat little scientific tie-in, but really, that bit never goes deeper than your average science article in a major newspaper. The dramatic structure of Constellations is set up to demonstrate that all futures are possible, suggesting that perhaps we may derive comfort from knowing that our other futures – the choices we didn't make – exist elsewhere, in some other form.

For originality, the play struggles. It's basically a version of the Nineties movie Sliding Doors but with more storylines. Given the mode of storytelling, it also lacks the kind of inevitability that drives a story forward, despite repeated glimpses of a future scene – that is, the future shown in this play. Having said that, Constellations still turns out to be sensitive and engaging, especially when Marianne and Roland find themselves facing difficult and painful times.

Under Liz Fisher's direction, the Street Corner Arts production moves at an appropriately quick pace. Stephanie Carll and Ryan Hamilton are well-cast in their roles, adopting the British accents of Payne's script confidently. As actors, they have a difficult job, in that an audience typically wants to invest in characters and care about what happens to them, and the script essentially shows different versions of the characters at every turn. In one scene, they meet up, but Roland is married. Try again: They meet up, but Marianne is engaged. Try again: They meet up, but they're just not into it. Try again: Okay, this time it works out, and now the audience can start caring about what happens. Given that, Carll and Hamilton both find ways to make lines fresh, even if they've already delivered them two or three times in the last five minutes.

The set and lighting design by Patrick Anthony is memorable. Bare bulbs hang at different heights throughout the space, and occasionally some are raised or lowered. As a concept, it makes sense, although in execution it's not apparent at first if the movement of the lights is intentional or an error of stage management.

The Street Corner Arts production is a tidy, quick show. The script may not offer much to stand on, but the company offers a solid performance.