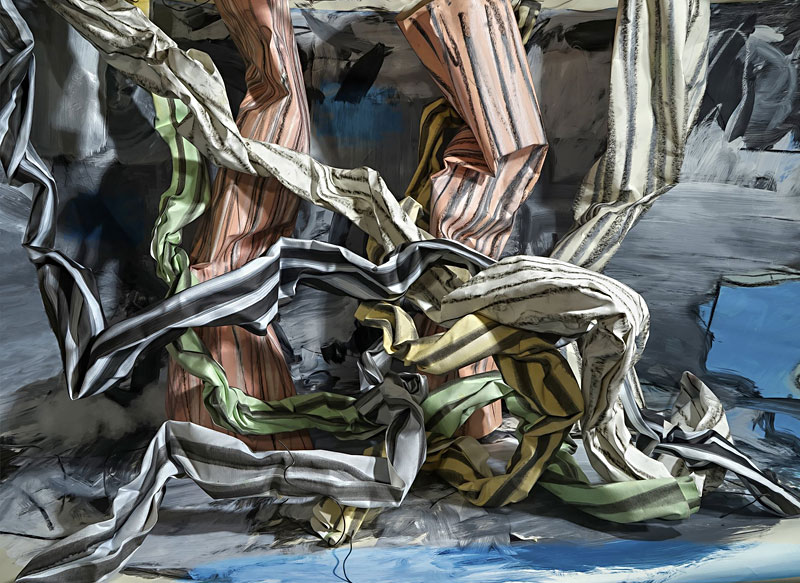 Run Through the Jungle by Mike O'Brien

In Mike O'Brien's Run Through the Jungle, a riot seems to be taking place, and a man is being trampled. We can see the man lying on the ground as legs stomp by. He reaches out, desperate to be lifted up, but he's ignored. The figures are wearing stripes – maybe prisoners in a rush to escape after a wall has been thrown down.

However, it might not be a prison riot. It could be a dance instead, a raucous, climactic moment at a juke joint near 3am when the party has become ecstatic and all control lost. This guy is so drunk and wild that he's fallen gyrating and writhing to the floor, reaching out to a buddy who's laughing his ass off, about to lift his friend to his feet so he can get back to dancing.

These are things I see in Run Through the Jungle, but it could be anything or nothing at all. What we really have is a photograph of a sculpture, like a still life, of colored, striped tubes. The stripes are white and black, red, green, yellow – all in a tangle. Three of the striped tubes are vertical, while others are horizontal or at odd angles. O'Brien distorted his objects, crumpling, bending, and twisting them before photographing, which may be what makes them seem so human. They are solid enough to have presence – they are recognizable – but they are each different enough to have personality. This is in addition to the composition he's chosen, which emphasizes action and interaction, an eventual instant within the photographed sculpture.

A sample (smaller than the real thing) of one of O'Brien's sculptures is set up in the gallery so one can get a sense of how the process works. A box, like a diorama, holds the painted canvas and paper forms that will eventually be photographed. In person, the diorama doesn't look like much, but once O'Brien has chosen his moment, photographed it, and reprinted it, the pieces take on new life – or any life, really, because in diorama form they are definitively inanimate. It's the photographing and printing process where the magic happens. This seems to be largely due to the selection of material and color, which even at its brightest is rather dull, giving it a zany antique look, like a faded carnival poster. Initially, I would have guessed that what I was looking at were heavily manipulated paintings and drawings, with an emphasis on shadows to give the image depth. But what we end up with is an uncanny representation of space, an object that ultimately is a photograph, but which may equally be a painting and a sculpture. It's a clever trick, and at its best, such as in Run Through the Jungle, it is very satisfying.

The only drawback of "Mayhem, Method and Medium" is that we are basically getting the same kind of image again and again – similar distorted lines and color – and in the end, only a handful stand out as truly successful. I would have liked to have seen more variety, more experiments with color and shape; more possibilities explored with the physical objects themselves. The images that are on display are engaging, but once I have experienced the process, I want to be impressed further. Woe to the artist making good work, because the viewer is ever demanding. However, the artist can take comfort in the fact that the art itself is even more demanding, if that is any solace at all.

"Scorch and Drag" at Flatbed Gallery
John Robert Craft's objects and prints, combined with the viewer's eye, creates a chamber of reverberating visions