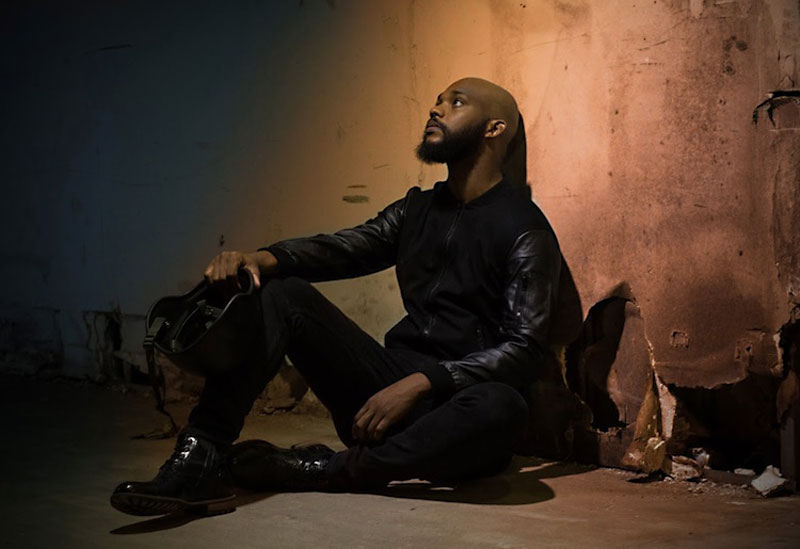 Is it just me, or are dystopian stories getting hard to watch these days? Anybody?

Different Stages has either the luck or the misfortune, depending on your perspective, to have picked Fahrenheit 451 months ago for production. Directed by Lily Wolff, the play features fireman Guy Montag (Kriston Woodreaux), whose job is not to put out fires but instead to start them. A true patriot in an authoritarian society, he burns books – any books. In this future world, nobody reads, and people like his wife Mildred (Martina Ohlhauser) live shallow lives, obsessed with television and manufactured drama.

Oddly, he strikes up a friendship with a young woman named Clarisse (Bria Washington). Clarisse is different, and strange. She sticks her tongue out for raindrops. She goes for late-night walks. She alone appears unshackled from the media – and drug-induced stupor that grips the rest of her neighbors. In speaking with Montag, Clarisse creates the hairline crack in his worldview that eventually ruptures.

The actors in this cast are fully committed and deliver strong performances. Rick Smith especially turns the supporting part of Fire Captain Beatty into a memorable turn, and Wolff's direction gives Cassie Reveles and Eva McQuade openings to insert occasional goofball comedy into a dark story. Fahrenheit 451 is a showcase script for a good sound designer, and Lowell Bartholomee (who also created the video design) does not disappoint.

The script, however, is evidence of a novelist's hubris. As a novel, Fahrenheit 451 is a classic entry in high school English syllabi. In adapting the novel into a work for the stage, author Ray Bradbury fails to present the kind of dialogue that runs smoothly and easily conveys a story. If one is already familiar with the story, it's perhaps not a problem, but for those with only a book-blurb awareness of the narrative, it doesn't totally come together.

It's also a curious point in history from which to view the story, which was originally published as a novel in 1953. The reason books are outlawed in this sad, gray world is because minorities, feminists, and other marginalized people were offended by what they read. So many people objected to content that everything literary became fuel for the bonfire. The play doesn't dwell on that bit of backstory, but it's notable because it makes this play hard for either side in our currently two-sided political catastrophe to embrace. Yes, a lot of people reading this review are likely to agree that we as a society need to wake up, turn off the entertainment, and exit the social media-induced stupor into which many of us have fallen. The suggestion from Bradbury, who leaned conservative politically, that this is a result of the oversensitivity of minority groups may meet with a different set of responses.

Perhaps that makes Fahrenheit 451 more valuable and timely. The last two weeks have seen a lot of think pieces about getting outside of one's own bubble. Maybe you agree with Bradbury's philosophy, maybe you don't. But putting yourself in a position of intellectual discomfort is what Bradbury, and our current times, are asking of us.

A note for those with significant breathing issues: The production makes very generous use of stage smoke – not surprising, given the main character's job title. It's enough that the smell stays with you after you leave the show.